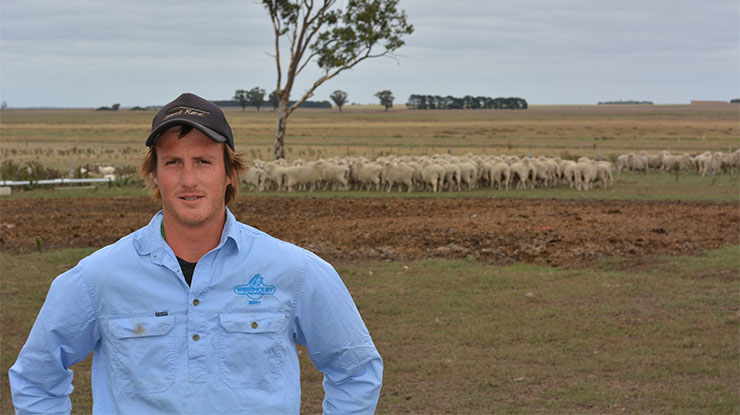 Lamb survival rates at the western Victorian mixed livestock and cropping property ‘Wirrinourt’, Lake Bolac, have significantly improved in recent years on the back of a suite of new management strategies.

Installing temporary fences before lambing is one of the changes livestock manager Matt Charles and owners Rowly and Nick Paterson introduced to the business after attending an MLA Producer Demonstration Site (PDS) field day.

“We’re constantly going to field days like the temporary fencing one, and if we find something valuable, we’ll try to implement it into our operation,” Matt said.

Before introducing temporary fencing, Wirrinourt ran big lambing mobs, with as many as 300 twin-bearing ewes lambing on a 35ha paddock.

“Now, most of our twinners won’t lamb on a block bigger than 10ha, and we have a maximum of 10 ewes to the hectare on those blocks,” Matt said.

“Adding temporary fences and splitting up our mobs at lambing time has massively increased survival rates, with nearly a 20% improvement in the mobs we split over the first two years.”

“Using temporary fences and moving to a split joining has meant we can target the better paddocks twice over a year and intensify grazing of those smaller areas,” Matt said.

“Where the fences have worked really well, we’ve followed up and added permanent fencing in those areas.”

Matt said while temporary fencing has been successful, it’s been a learning curve and they’ve adapted accordingly.

“We’ve learnt since starting that you’ve got to fence according to your land types.

“If you have an undulating paddock or one with a hill in it and you halve that, all your sheep will just sit on the high ground and you’ll end up with an uneven grazing, so fence the high and low ground separately,” Matt said.

Take the time to train your sheep

According to Matt, it’s also important to train your sheep onto the fences so they’re familiar with the infrastructure.

“The first year we started doing this we had all the sheep in the paddock, then came in and split them just before lambing. They showed it no respect at all, walking straight through the fence across the whole paddock as they were doing the two weeks before the fence was up.

“Get them used to the fences for a few weeks before lambing first. Once they’ve lambed, keep checking your fences are running to avoid lambs chewing the wires.”

More to it than fencing

As well as adding temporary fences, Matt has introduced other practices which have improved lamb survival rates, including containment feeding over summer.

“The containment pens have helped us stay on the ball with our ewe nutrition from pre-joining right through their pregnancies,” Matt said.

As a result, pastures are in better shape for lambing and the ability to monitor and manage ewe condition score for joining has contributed to increased scanning percentages.