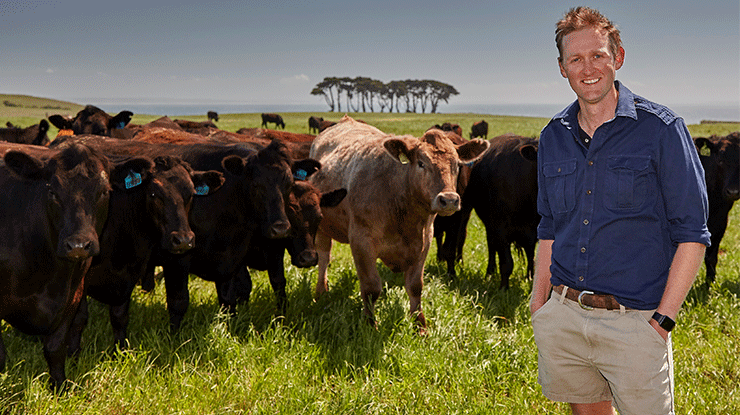 Reliable rainfall, stable temperatures and naturally fertile soils set the scene for the Bruce family’s productive Tasmanian beef enterprise, but careful management is the key to truly reaping the rewards of this natural bounty.

The four generations of the family currently involved in Western Plains Beef have that down to a fine art.

Iain Bruce said although selling cattle into the high-end market through Greenham Tasmania’s Cape Grim and Never Ever brands has enabled their enterprise to receive financial rewards above commodity markets, it hasn’t changed the family’s operating philosophy.

“Even if we were selling a commodity product, we would still do what we are doing,” Iain said.

“But with Greenham, we have more purpose with it.

“We’re loyal Greenhams suppliers because they are using the beef the way that it should be used – it’s not just beef anymore, it’s a lot more than that. It’s a story.

“They’re able to sell a large amount of it into places like America because of what the producers do, and how we look after our animals, our pastures and the environment that we farm.

“The customer is seriously wanting to know that and is prepared to pay for it.”

Prior to COVID-19 restrictions, Western Plains Beef opened its gate to Greenhams’ customers, with Iain’s father, John, taking visiting chefs, restauranteurs and red meat marketers through the property to see just what goes in to producing their beef.

Visitors were given an insight into the carefully balanced elements of the enterprise.

While Iain describes his father as ‘the boss’, in the five years since Iain left a full-time agronomy role to work in the family enterprise, he has introduced detail to feed budgets to tweak the long-standing approach at Western Plains Beef.

“We have a mature business as far as our stocking levels go,” Iain said.

“We have traditionally run a cow-calf operation. For a long time, we have bought weaners in as well.

“The area of the farm that we breed on hasn’t got any bigger and we haven’t increased the number of cows dramatically, but we have started to improve pastures. We have added a bit of land and added some irrigation to our finishing areas.

“Buying in weaners and steers adds to the mouths to eat that extra feed.”

John established lucerne pastures 27 years ago as the first step in filling the summer feed gap on the farm.

They also use prairie grass in their pasture mix throughout the property as they have found it to regrow quickly after winter grazing – a strategy developed by Iain’s grandfather during his time as a Department of Agriculture agronomist.

“We’re also using some of the newer cocksfoot varieties in combination with ryegrass and legumes to use the summer and autumn moisture,” Iain said.

“We’re irrigating some land to help with that, with about 10% of the farm under irrigation.” Cattle are rotated through paddocks at a rate determined by the leaf emergence rate – this foundation principle of rotational grazing has become the foundation for every decision the family makes within their production system.

Coming out of summer, the rotation slows down and cattle are supplemented with silage and hay as required. This enables cattle growth rates to be maintained while the slower rotation enables the pastures to grow.

Nitrogen is applied strategically during autumn, to build a winter feed wedge, in line with rainfall and pasture growth.

“If we get good rains through autumn, we will speed the rotation up, then slow down again over winter when it’s colder and grass grows more slowly,” Iain said.

“Our feed supply/demand break-even date is around 20 September and we are lucky here that we can rely on this timing consistently each year.”

The annual calving cycle is timed to fit in with the pasture growth cycle, with calving in late winter and weaning in late February.

Cows are pregnancy tested at weaning and dry cows and cull cows receive a few weeks of priority feed to ensure they are Meat Standards Australia compliant and then are sold in April – targeting Greenham’s Vintage Beef brand.

This marketing strategy lines up with the start of spring.

“We feel getting them off the place to give that spring grass to the next year group has given us the ability to provide cattle with the same weight in September that we used to sell in December,” Iain said.

It also enables them to turn-off stock at a time when the market is short.

Iain is passionate about the beef industry and gives back to it as a producer member of the Southern Australian Livestock Research Council, which develops the regional research and development priorities which feed into MLA’s R&D investment.

He also chairs Tasmania’s annual Red Meat Updates, which is on Friday, 23 July 2021.

“Red Meat Updates has proven to be a successful way to engage with producers and network and learn.

“The time that I give, I get a personal benefit from it in terms of my own networking and learning. I am really looking forward to having Red Meat Updates back again at the end of July,” Iain said.