The spread of kikuyu

Fifteen years ago, Esperance producers Erica Ayers and Phil Cleghorn had 30ha of kikuyu-based pastures. In an effort to embrace the species’ production and environmental benefits, they’ve now increased that size to 800ha.

Erica and Phil are now taking their pastures to the next level by sowing legumes, cereals or canola into the existing kikuyu pastures as either a winter feed boost, nitrogen fixer or harvestable crop. 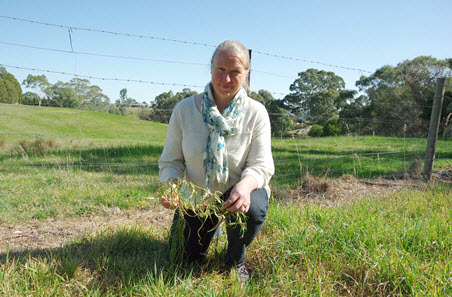 “Our ultimate aim is to have a plentiful, productive and self-regenerating companion legume to provide high quality winter and spring feed for stock and produce nitrogen to feed the kikuyu,” Erica told a recent MLA-sponsored beef update at Bairnsdale, Victoria.

“We’re targeting companion legumes with Whittet kikuyu. We rely on kikuyu to balance production across the year and reduce the need for supplementary feeding. We know if we lose dry feed with unseasonal rainfall, the kikuyu will bounce back in our system and produce green feed.”

Erica and Phil’s farm was one of 15 sites in a trial focused on improving sub-tropical grass pastures on the south coast of Western Australia, managed by the WA Department of Primary Industries and Food and part-funded by MLA.

Winter feed options are boosted by over-sowing with ryegrass, oats, clovers and serradellas. Santorini serradella has shown persistency in their rotational grazing system. Lupins are grown to harvest as grain – cropping two to three tonnes/ha – or to use as a fodder crop to finish lambs. They also utilise the nitrogen-fixing capacity of lupins to drive kikuyu growth.

“Our annual pastures typically finish by the end of October; however, kikuyu production will respond to out-of-season rainfall. Grazing green kikuyu through the stubbles extends the high quality grazing season as long as possible,” Erica said.

“Out-of-season rainfall can fill a feed gap in summer and autumn.

Pre-sowing preparation includes good weed management in the 12 months prior and two herbicide knockdowns; the first with glyphosate and a wetter, followed up with a Spray.Seed 250.

“We strategically graze but keep rotations very flexible to try to give pastures rest and recovery times and maximise feed utilisation,” Erica said.

“We routinely use chemical to ‘put the kikuyu to sleep’, then over-sow with canola or lupins.”