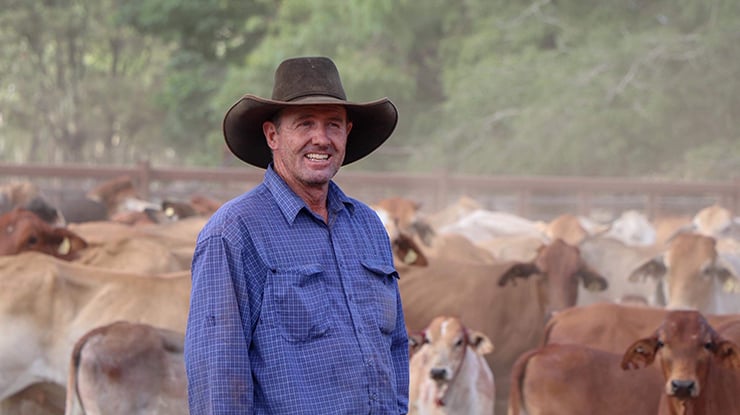 When it comes to transporting livestock, loading and unloading are some of the most dangerous parts of the process and contribute to high rates of workplace injuries and even fatalities.

A safer transporting process begins on-farm, where producers have an important role to play by ensuring that their own facilities, particularly their ramps and forcing yards, are up to scratch.

Yard upgrades that tick the boxes

When Central Queensland Brahman producer Russell Lethbridge (pictured above) realised the benefits that he could achieve from improving his loading facilities, it was a no brainer for him to upgrade.

Updating his facilities not only improved loading times but brought additional benefits to safety and welfare for himself, his transporters and his animals.

Russell started making modifications to the first of his four cattle yards before the Australian Standard for loading ramps and forcing pens was developed.

However, he used the Australian Livestock and Rural Transporters Association (ALRTA) guide and researched the upgrades, so is confident they comply with the Standard and current requirements.

“Before upgrading, we did a lot of research through the ALRTA guide, looked at what other producers had in their own yards and consulted with transporters, then adapted these findings to our own operation,” Russell said.

“We’re always loading double deck cattle crates up here so the biggest change we made was adding a ramp that could load the top deck of a crate to the existing single ramp we had.

“We also added new rails on the ramps that would improve handler safety by reducing fall risks and which are compliant with the Standard.”

Benefits from the modifications were evident from the first load Russell sent out, with greatly improved loading efficiency, free-flowing cattle that didn’t need to be pushed up the ramp and all-round improvements to workplace health and safety.

Russell is a firm believer that northern producers have a responsibility in managing driver fatigue, and that updated loading facilities are a key part of this.

“A driver’s day often starts when you start loading. If you’re taking an unreasonable amount of time to get animals onboard, turning a 45-minute job into a three-hour job, you’re adding to their fatigue,” he said.

“In northern Australia, most trips already take a whole day, so the onus is on producers to do what they can to decrease loading times, including through improving their facilities.”

Fatigue can also be reduced if producers prepare their animals for transport before the driver arrives.

“Animals should be drafted ahead of time, and any other preparation, like adding tags, should already be done, so as soon as the driver pulls in, the loading can start,” he said.