Recent analysis conducted by MLA’s Market Information Team reveals an interesting shift over the past decade in turn-off points for Queensland steers.

Analysis of yarding volumes across all Queensland saleyards for heavy steers shows a decline in overall throughput since January 2010 to March 20221. Meanwhile, feeder steer throughput has increased substantially, with increased capacity and demand for consistent product from consumers driving the sectors’ growth.

Since April 2021, supply of feeder steers has remained stubbornly tight, averaging 8,500 head/month as producers opt to sell cattle directly or higher paying restockers purchase traditional feeder cattle at the saleyards. While heavy steer yardings since October 2019 have not risen above 1,000/head per month since October 2019, since this time, throughput has averaged 334 head/month, 55% below the long-term average.

For the most part of the decade, heavy steer prices have operated at a discount to feeder prices. The exceptions to this are:

Since January 2020, the heavy steer price has operated at a monthly average discount of 17% to feeder steer prices. 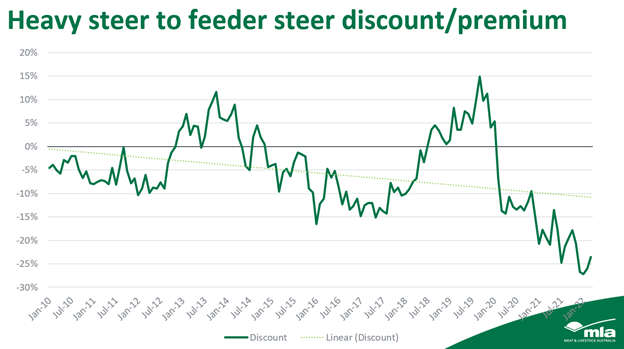 The favourable prices on offer for younger, lighter cattle can be attributed to lower supply of heavy steers, as well as significant demand for feeder cattle in Queensland as lot feeders increase capacity and utilisation to meet growing customer and consumer demand for a consistent product.

These prices mean producers can run more cattle on-farm due to the lighter turnoff weights of feeder steers while continuing to generate favourable returns, with the buoyant feeder market outperforming its heavy steer counterpart.

This is particularly relevant during favourable seasons, when turnoff weights for feeder steers are heavier due to the strength of the season.