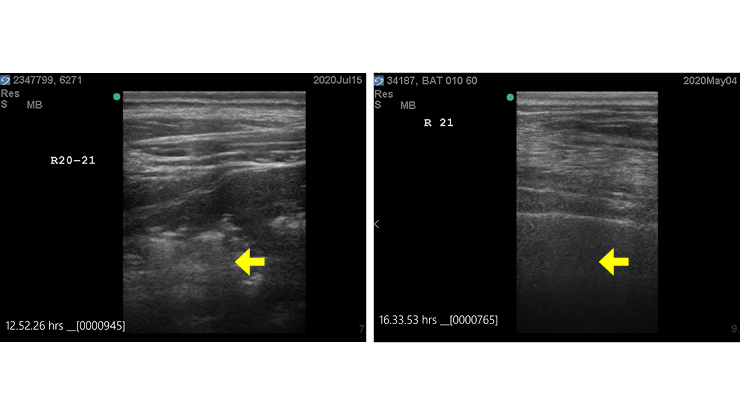 A new project testing a range of diagnostic methods for BRD diagnosis has shown thoracic ultrasound to be consistently accurate in identifying abnormal (left) and normal (right) lung function.

Ultrasound technology has the potential to accurately and rapidly diagnose bovine respiratory disease (BRD) in Australian feedlot cattle, according to new research.

Six months into a project testing the accuracy of a range of diagnostic methods for BRD, thoracic ultrasound has proven to be consistently accurate.

The project is funded by MLA in consultation with the Australian Lot Feeders’ Association and involves a multi-institutional research team comprising Apiam Animal Health, Precision Animal Solutions and The University of Sydney.

“Accurate and rapid diagnosis of BRD remains a major shortfall in mitigating the negative impacts of the disease on animal health and welfare, along with the associated costs to the feedlot industry through performance loss and animal death,” Dr Batterham said.

“Having the ability to confidently confirm BRD diagnosis would be an advance on what the industry has been doing for the past 25 years, where diagnosis has been based on subjective observation.”

The diagnostic accuracy of a range of tools is being evaluated in addition to ultrasound, such as wearable technology to provide remote continuous monitoring of location and behavioural metrics, as well as in-situ rumen boluses for real-time core body temperature recording.

The first six months of the project involved 200 head of commercially sourced feeder cattle that were monitored at a collaborator feedlot site and followed all the way through to slaughter, at which point carcase and respiratory system offal data was collected.

The ultrasound surveillance sees the probe applied to the chest of animals so researchers can visualise the lungs and chest cavity to make determinations.

“Through this project, we’ve been able to determine it’s possible to use ultrasound to see if there’s an infection, and importantly, to also see where there’s not an infection and the lungs look normal,” Dr Batterham said.

“The project to date has shown that ultrasound has consistently agreed with the post-mortem findings which is indicating good validation.”

Using learnings from the dairy industry

Dr Batterham said that the background and preparation for this project took learnings from the dairy industry, where ultrasound has been used for some time diagnosing respiratory disease in calf-rearing operations.

“We’ve adapted these in order to operate with our larger beef animals, held in typical feedlot handling facilities where it’s usually harder to access and image the lung field in the forward parts of the chest.”

The ultrasound unit utilised in the research project, specifically the transducer probe, is typically used for imaging the reproductive tract in cattle and horses for pregnancy diagnosis and oestrus monitoring for artificial insemination.

This configuration can also be used to image tendons and ligaments for large animal lameness examinations.

For the respiratory application, Dr Batterham said the same ultrasound being used to scan heifers at inductions for pregnancy can be used in the feedlot hospital to confirm BRD diagnosis.

Dr Batterham said the project has allowed researchers to pinpoint key positions on an animal’s chest where the ultrasound probe should be positioned to enable more rapid, accurate diagnosis.

“A completely thorough ultrasound chest survey would normally take 30 minutes on each animal, which isn’t useful in a feedlot production setting.

“However, we’ve worked on truncating that to a useful but still reliable set of locations, and I believe we can get that test time down from 30 minutes, to three to five minutes, to achieve about 90% accuracy,” Dr Batterham said.

“We know that in the right side of the chest, there are more lung lobes, the front lobes are lower than the left side and that generally bacterial infections start here first. We focus our surveys in this region to detect early established disease.”

Dr Batterham said establishing a training resource for thoracic ultrasound would enable sophisticated feedlots to have on-site personnel who are equipped to undertake BRD diagnosis confirmations in their own hospitals with their own apparatus.

However, he said it’s important to note that just like scanning for reproductive purposes, a minimum competency and upkeep of this skillset is required to optimise accuracy.

“It’s another tool that could be used to not only refine BRD diagnosis, but also because of the prognostication value, take it further and modify treatment based on how far advanced the infection is.”

A second replicate of the trial will start soon to further validate the project’s findings.