Matching stocking rate to carrying capacity is good land management but can be difficult in practice. A producer group in Queensland is upskilling to meet the challenge. 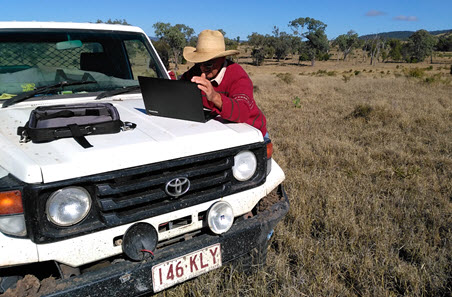 The catalyst for a benchmarking group in the Maranoa region of Queensland to undertake a grazing management project was a detailed analysis of their businesses and the performance per animal equivalent (AE).

“It’s one thing to work out how many AEs are being carried and how many kilograms of beef each animal unit is producing, but this information is much more meaningful within the context of what the carrying capacity of the property is; that is, how many AEs it should be running in the long-term,” said consultant Ian McLean of Bush Agribusiness, who runs the group.

The group had been established for about three years, meeting four times a year, when it began a project through the MLA Donor Company Producer Innovation Fast-Track program to determine long-term carrying capacity and land condition.

Ian said while matching stocking rate to carrying capacity is a fundamental tenet of pastoral production, applying the principle has practical challenges. Ultimately, this leads to declining land condition in some places.

“It’s independent of season and rainfall.

“At the moment, most producers have a gut feel for what their carrying capacity is and some do it very well. This project is looking to formalise it more and ask what the carrying capacity would be if the whole property was in ‘A’ condition.

“We’re also setting up some monitoring sites and training producers in formal land-condition assessment and annual forage budgeting, so they continue to monitor land condition and better match stocking rate to carrying capacity year-to-year after this project ends.”

While there are some sheep producers in the group, it’s predominantly rangeland cattle producers with extensive pastoral properties and a small amount of forage cropping thrown in.

“We began the project by engaging rangeland ecologist Col Paton from EcoRich Grazing to conduct a detailed assessment of all 12 properties in the group," Ian said.

Col used Queensland land type classifications and the land assessment system described in MLA’s Grazing Land Management material. It applies the A, B, C or D classification to land in each paddock of the properties, where A is, as Ian describes, is “as good as it gets”.

“There are very few places anywhere that are in A condition across the whole property,” Ian says.

Land in C condition (poor) is less than half as productive as land in A condition, and this has a proportionate effect on carrying capacity. Col said land in condition B or C can usually come back to A condition with rest.

“Land in the B condition will bounce back quickly,” Col said.

“If it’s C condition, it will take longer. Category D is irretrievable without mechanical intervention.

“We assessed the land condition but also applied some economics into what it will cost to improve it and what they will get in return with extra carrying capacity,” Col said.

“The power is in being able to put real figures on improved carrying capacity and improved land condition.

“Most producers are stocked to capacity for the pasture and land condition that they have, but could have higher carrying capacities if the land was in better condition with more productive pastures,” Col said. “They were encouraged by seeing what they could do.”

Want to learn more about grazing management in northern enterprises? Get along to an upcoming MLA Grazing Land Management EDGE event.