Watch out for fungal disease in legume pastures 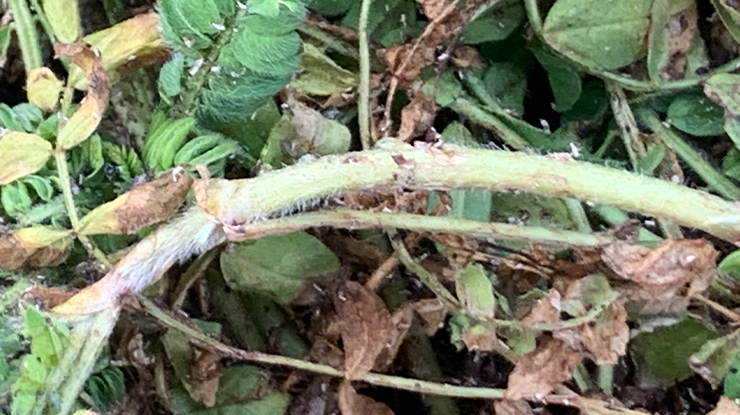 Here, NSW DPI research officer Dr Belinda Hackney talks through what predisposes legume pastures to fungal disease and outlines what steps producers can take to reduce the likelihood of their pastures becoming affected.

You’ve been receiving increased reports of fungal disease in NSW. Why do you think this is the case?

Fungal disease in legume pastures is a product of the ideal growing conditions seen recently. This growth has allowed a huge pasture canopy to develop that creates warm and wet conditions, ideal for fungal development.

Limited air movement through the canopy enables the disease to grow and spread rapidly, resulting in potential loss in pasture production, feed quality and nitrogen fixation.

What pastures and areas are at risk?

Legume-dominant pastures with dense canopies are most at risk. Fungal disease outbreaks are currently being reported in NSW, however, other states experiencing good growing conditions may also be at risk.

What practical steps can producers take to prevent and manage fungal disease?

In the case of fungal diseases, prevention is far better than cure. Once the disease has established it can be very hard to control and spreads rapidly.

Producers should graze their legume pastures to reduce the canopy load, as opening them up will allow for airflow and reduce the risk of fungal growth. This needs to be prioritised, even for pastures planned for grazing later in the season, or they’ll be at risk.

The first signs of fungal disease often present as isolated patches of pasture appearing to wilt, then developing grey and/or brown patches.

If identified, there are fungicides registered for use in pastures as a management option but repeated treatments are usually required for control and withholding periods must be adhered to.

As temperatures begin to rise in late winter and early spring, conditions for fungal development will become increasingly favourable in legume pastures with heavy canopies, so prevention should be a priority for producers right now.