In Australia the flies of most concern to livestock producers include:

The buffalo fly is primarily a problem for cattle producers in northern Australia. They are a small, biting fly that feeds on the blood of cattle and breed in the dung of the animals. Buffalo flies are found in hot humid regions of northern Australia from north-eastern New South Wales to northern Western Australia. 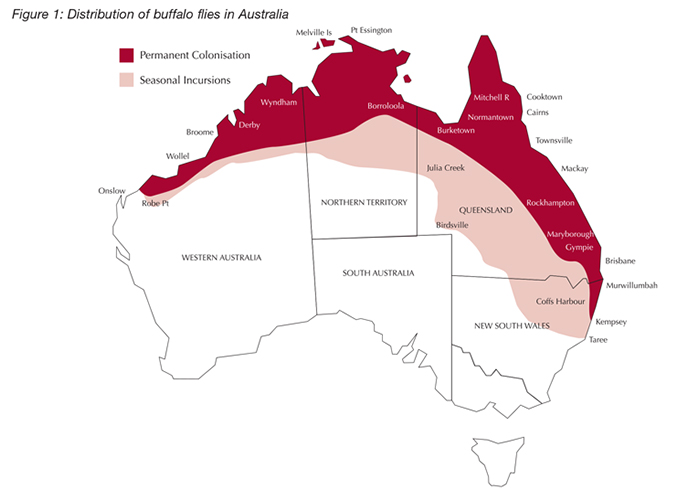 Buffalo flies have developed resistance to most of the chemicals used for their control such as in impregnated ear tags or back rubbers.

Conditions under which buffalo fly are likely to occur

The spread of buffalo flies between herds and between animals occurs when:

Buffalo flies cause a number of problems. It is generally considered that infestations of more than 200 flies per animal are necessary to reduce production.

Clinical signs that would lead a producer to suspect buffalo flies include the following:

An integrated approach to buffalo fly control should consider the following:

Flies are a problem in many feedlots due to the abundance of available food and breeding medium (dung). Only a few types of fly are of concern due to their numbers, annoying behaviour or disease-carrying potential.

Conditions under which nuisance flies are likely to occur in feedlots

A key for identifying feedlot flies is included in the MLA Tips & Tools: Integrated pest management for nuisance flies on cattle feedlots.

An integrated approach to feedlot fly control should consider the following RULES acronym:

Flystrike is a significant health, welfare and profitability concern for Australian sheep producers. The species responsible for the majority of all strikes is the Australian sheep blowfly (Lucilia cuprina). The adult fly is a copper green colour with red eyes and produces a smooth skinned white/cream maggot.

The MLA-funded FlyBoss website is based on best practice parasite management strategies. It provides planning tools for optimal shearing, crutching and (if required) chemical treatment scheduling to reduce the risk of flystrike.

Conditions under which flystrike is likely to occur

Clinical signs that would lead a producer to suspect sheep blowflies include the following:

An integrated approach to flystrike control should consider the following: