Liver fluke can infect cattle, sheep and goats, as well as a range of other animal species. It is a zoonotic disease which means humans can also be infected.

The lifecycle of the liver fluke requires two hosts:host (a small freshwater snail) and the definitive host (cattle, sheep, goats, alpacas, horses etc.). If the snails are not present, the liver fluke lifecycle cannot be completed as the larvae develop in the snail (for 2-3 months) before passing from the snail to form cysts which are then eaten by the livestock. 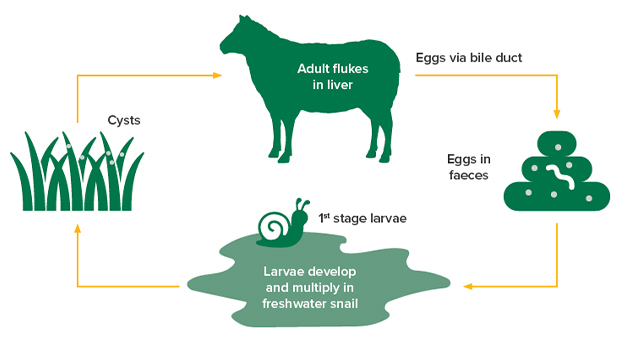 Liver fluke infection reduces animal productivity on-farm. It is also an economic cost to the meat industry due to condemnation of livers that the fluke burrow through on the way to the bile ducts.

Conditions where liver fluke is likely to occur

Liver fluke can produce either acute or chronic disease.

Acute disease tends to follow a relatively short term intake of a massive number of fluke cysts. This causes substantial liver damage which results in:

The clinical signs for chronic disease develop slowly as the adult fluke accumulate in the bile ducts within the liver. Signs include:

An integrated approach to liver control should consider the following: