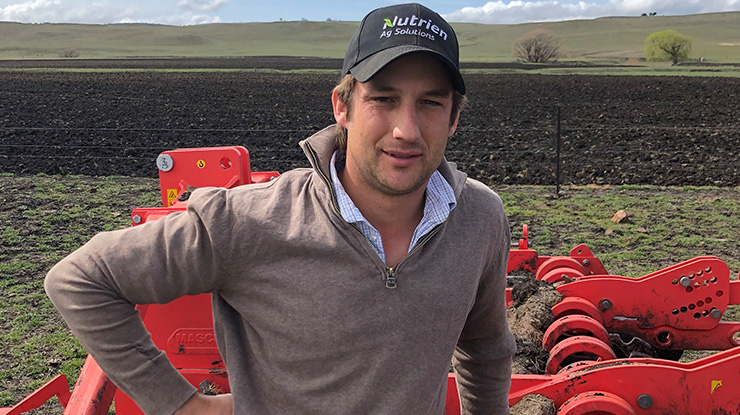 Monaro sheep producer John Murdoch with a Maschio Speed Tiller in a paddock prepped for sowing forage brassica in October.

John is chairman of Monaro Farming Systems, which ran the PDS. His family business, Murdoch Bubbenluke, hosted some of the trial paddocks.

The Murdochs operate three properties in the Bombala district of south‑east NSW where they produce Angus cattle and Merinos. They turn-off about 3,000 first‑cross and Merino wether lambs a year for the domestic market.

While John went into the PDS confident his lucerne‑based system would prove the most cost‑effective and efficient way of finishing lambs, he came away with an appreciation of the value of annual forages.

“We turn-off the first‑cross lambs, then our Merino wether weaners go onto the improved pastures, then our weaner cattle through the winter,” John said.

“We keep processing our bred inventory through on finishing pastures, year‑round, to their earliest, high‑value target weight.”

They sell most crossbred lambs in January and February, at an average 18–20kg carcase weight, and aim to have them all gone by March.

In the first year of the PDS (2017–18) the fescue paddock achieved $828/ha net profit, while the brassica crop (with thistle contamination) achieved a net profit of $123/ha.

In the second year, with lower rainfall, the net profits were $209/ha for the fescue, and $572/ha for the brassica.

John said he was surprised by the fescue’s performance, as he hadn’t considered it suitable for lamb finishing.

“Because of bloat issues with lucerne, we can get a bit stuck in summer for higher‑performing cattle feed options, so we’ve always had fescue as a cattle feed, but I was surprised by how well the lambs did on it,” he said.

“We supplemented them with about 120g/day of lamb pellets and they gained 180–200g/head/day on the fescue.

“The brassica allowed us to finish our lambs at the same time, but at a little higher weight – 20–22kg carcase weight.”

Steers grazing the stubble in winter also put on 1–1.5kg/day.

John’s now incorporating brassicas into his rotation for the dual benefits of grass weed control and additional carrying capacity and is also planning to try grazing canola.

He’s also going to participate in a new Monaro Farming Systems PDS to examine the costs and benefits of supplementing lambs on finishing crops.