Beef trim accounts for a significant portion of a carcase and manufacturing beef about one third of Australian exports. As such, global manufacturing beef prices underpin the value of a large part or, in the case of cull cows and bulls, the vast majority of each animal. And historically the US, as Australia’s largest buyer of lean grinding beef, has been the primary driver of that market. However, cyclical and structural changes are underfoot that may see the drivers of the global manufacturing beef market shift in coming years.

Over the last decade, the US has imported about 20-35% of its annual domestic lean manufacturing beef requirements (in contrast it has imported 8-14% of overall beef consumption). Over half of US beef is consumed as ground product, typically as a burger through the vast array of fast foods chains that stretch across the country. Over the decades burgers have remained a mainstay of the US diet and underpinned the beef trade from Australia – trim from US fed cattle is typically too fatty to simply grind into a desirable chemical lean (CL) burger mix and requires blending with leaner product.

The primary source of lean grinding beef in the US comes from cull cows and bulls, but is supplemented by imported product depending on domestic availability. As highlighted below, there is almost a one-for-one relationship between domestic US cow and bull beef supply and frozen imported boneless beef – for almost three decades, the total lean beef supply has remained around 1.8 million tonnes boneless weight. Imports have acted as the pressure valve to supply, expanding during periods of US herd growth and declining during herd liquidation as production increases. 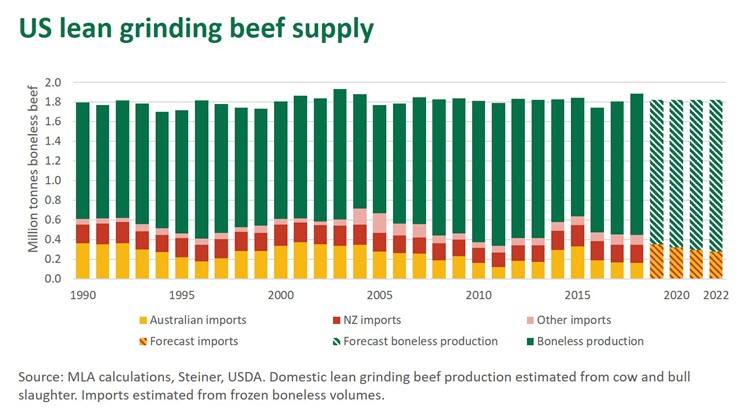 Australia is the primary source of frozen boneless beef imports (accounting for 44% of overall volume over the last decade), followed by New Zealand (38%) and Nicaragua (7%) and Uruguay (5%).

Cow and bull beef production has been rising in the US over the last three years – with elevated dairy cow slaughter fuelling growth of late – and is expected to continue on that path over the next few. As such, US appetite for imported lean grinding beef may be subdued, reflective of the dynamics witnessed amidst the previous US herd liquidation in 2011.

So if US lean imported beef requirements are declining then, as discussed recently, why are imported Australian trim prices to the US at a four-year high? Part of the answer is an Australian dollar trading at the lowest level in over a decade and limited offerings out of New Zealand, but it is also closely linked to rising demand from Asia competing with a strong US consumer market.

The pivot of Asia

The rise of Asia as a manufacturing market is not a recent phenomenon but has accelerated due to growth from China in the last two years. Between 2000 and 2005, Japan, Korea, China and South East Asia accounted for just 30% of Australian manufacturing exports. This share largely grew over the following decade but swung back to 34% in 2015 when acute shortages in the US pulled a lot of product away from the region. However, exports to Asia have since recovered and the region represented 56% of Australian manufacturing exports last financial year. 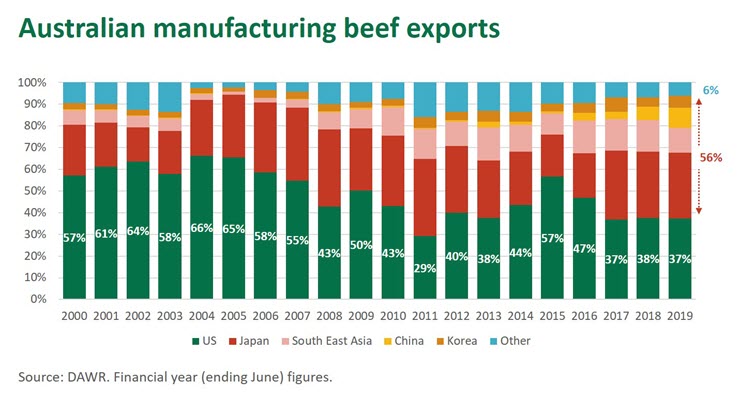 The use of manufacturing beef across Asia varies between markets and channels, but ranges from western burger chains in Japan, to dumplings in China, to canned corned beef in the Philippines. Australia’s share in each market depends on price point and access from often cheaper competitors, such as Indian buffalo or Brazilian beef (neither of which has access to Japan or Korea due to FMD status and India doesn’t have direct access to China). However, Australia’s food safety and hygiene credentials also position it well in attracting large key accounts, such as multinational fast food chains with high reputational risk exposure.

More recently China has significantly expanded its market presence, buying manufacturing product but also lower value hindquarter cuts that would often be thrown into trim combos if destined for the US market. Australian manufacturing exports to China have increased 91% year-on-year in the first nine months of 2019, while hindquarter primal exports – namely shin shank, knuckles and outside flats – have expanded 86% over the same period.

However, it’s not just Australian manufacturing and secondary cuts to China experiencing growth. Australian loin cuts are up 61% year-on-year so far in 2019 and chilled primal shipments have more than doubled. Meanwhile, Chinese beef imports from South America surged in the first seven months of 2019, with Argentina up 122%, Brazil up 6% and Uruguay up 36%, while shipments from New Zealand have risen 90% year-on-year.

As recently discussed, ASF is adding fuel to Chinese demand, but this growth also reflects a maturing of the market and strong consumer demand from a fast emerging affluent consumer class.

A severe economic slowdown in Asian markets could subdue this strong demand growth – which could create a particularly challenging trading environment with the current high volume of cheap commodity beef entering the region. However, consumer markets in Asia have so far proven resilient to ongoing trade tensions and future medium-to-long term demand growth is projected to remain positive across the region as the middle-class populations swell.

Nonetheless, the US will likely remain Australia’s single largest manufacturing market, even if its domestic supplies ramp up in coming years. Moreover, the US still has deeper pockets than many Asian buyers and the rise of Chinese competition has more been felt by developing regional neighbours, such as Indonesia and the Philippines.

The tricky part of using past trends to forecast the future is that they cannot capture underlying changes in the market. And you only need to pick up the newspaper to feel like a lot of change is afoot in the global grinding beef market.

Last year McDonalds in the US joined other chains – including Wendy’s, Shake Shack and In-N-Out – in featuring fresh-never-frozen beef in their range of quarter pounders. The entirety of Australian manufacturing exports to the US are frozen – on top of greater ease and safety assurances in shipping trim in frozen form, it also supports US grinders in cooling product through the manufacturing process as it is blended with fresh local beef.

While the fresh-never-frozen shift threatens the trim trade with Australia, frozen beef still remains critical to the vast majority of US burger manufacturing – McDonalds is yet to roll out fresh across its entire range – and the economics of the entire US industry moving to fresh don’t stack up, especially when it comes to producing burgers at an affordable price point.

The other major shift in the US burger market has been the arrival of plant-based alternatives on menus. Most notable has been the nationwide launch of Impossible burger in Burger King and Beyond burger in Carl’s Jr, but a range of other chains are testing the market, or planning to, and a series of new products are also in development.

These plant-based burger alternatives are hitting the market at an affordable price point – typically a small premium to beef burgers – but are yet to win wide-spread approval by customers or businesses to have a noticeable impact on beef demand. Although growth is strong, plant-based burgers of all varieties are estimated to still only represent a tiny portion of the food service burger market by value and they remain very much a niche product in the broader protein mix.

Potentially masking any displacement of beef products has been a humming US economy and a strong consumer market supporting foodservice demand, particularly in quick service restaurants and casual dining. Overall the size of the national burger prize has likely grown in the last couple of years, absorbing both increased beef and any plant based sales. A slowdown in the US economy, which remains a real risk, may see the competitiveness of the market come to the fore.

The other threat comes from cell-cultured meat however the price of these product remains well-above commercial viability. In addition, consumer’s still need to come to grips and accept these lab-grown products and they are yet to pass regulatory approval. Cell-cultured meat may compete just as much with their plant-based counterparts than real beef and have many challenges to overcome.

US market may trim down

Cyclical shifts in the US herd are underfoot which will limit demand for imported lean beef trim in coming years. This has happened before and will happen again.

At the same time, demand is growing in Asian markets, propping-up prices, but competition is also rising from lower cost competitors, namely from South America and India.

While manufacturing beef shipments to the US may ease off, this will be driven by imported beef demand on both sides of the Pacific and not the rise of alternative proteins – or, at least, not at this stage. Regardless, the US will likely remain Australia’s single largest destination for manufacturing exports, as it has for the good part of three decades.