While African Swine Fever (ASF) has dominated headlines over the last year, and added further fuel to imported meat demand, the growing importance of China as a global meat market has been underway for the past decade.

Inclusive of Hong Kong, China is now the world’s largest destination for beef, sheepmeat, pork, poultry and offal, pulling in close to one quarter of total meat traded on international markets.

Never before in modern history has the global meat trade centred so much on a single country.

Demand from China has been critical in supporting the value of Australian beef and sheepmeat, especially during recent drought-induced elevated livestock turnoff, but the dominance of a single market poses risks as well as opportunities amidst the current turbulent global trade environment.

While China has always been a large animal protein market due to its sheer size (representing an estimated 46% of global pork consumption, 15% of poultry, 11% of beef and 33% of sheepmeat in 2018), its growing importance as an importer is evidenced across most meat proteins. This rise has been underpinned by environmental and resource constraints limiting production capacity and consumers shifting, as they become more affluent, from carbohydrate grain-based diets to protein-rich foods derived from animal products.

As highlighted below, China’s share of global beef imports increased from 4% to 23% between 2009 and the most recent 12-months of available data, while sheepmeat jumped from 10% to 36%. Pork imports have lifted from 12% to 26%, while offal has increased from 38% to 47% over the same period. China’s share of the global poultry trade has remained flat due to expanding domestic production. 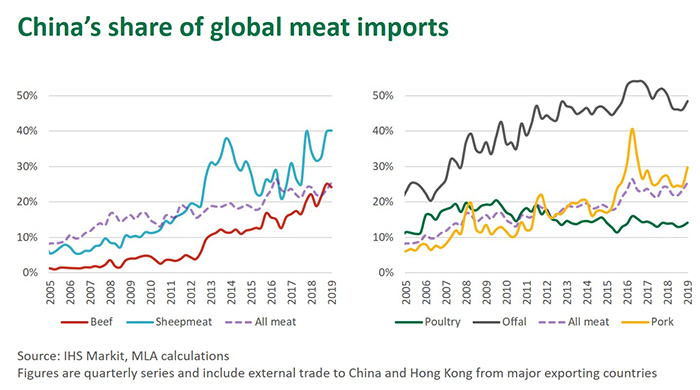 China’s expanded presence as a major meat buyer has been critical to supporting global prices at a time of record meat production and trade, especially for key exporting nations such as Australia. However, as the importance of China grows, so does its influence upon the market. Two major, and potentially competing, forces will dictate global trade flows and imported meat demand in China in coming years: ASF and the economic impact of the escalating trade tensions with the US.

The gap left by ASF

ASF will leave a massive hole in China’s domestic meat supply, with estimates for the 2019 decline in pork production ranging from 20-40% (or 10-20 million tonnes cwe). Even if a conservative decline were to come to fruition, there would not be enough meat traded on the global market to fill the gap. After rising steadily in 2019, wholesale pork prices in China have surged in recent weeks, surpassing the ¥30/kg ceiling previously tested in 2016.

The expansion of China as a major meat buyer has been fostered by the opening up of the import market. Free trade agreements, such as with New Zealand (2009) and Australia (2015), have reduced economic barriers to entry while the development of protocols and plant approvals, such as with Brazil and Argentina on beef, have enabled technical access. Improved access will allow major meat producers to fill some of the gap left by ASF, posing significant upside potential for global meat markets.

In contrast, China’s retaliatory tariffs on US pork have squashed this natural trading relationship, with the US producing record volumes and a massive shortage looming in China. At a time of heightened demand, Chinese market access changes have the potential to cause monumental shifts in global meat flows.

However, while significant on the export market, Australian red meat is tiny in the global production mix, challenged by supply constraints from drought and priced at a significant premium to many competing proteins. The average Chinese consumer is in no position to switch from cheap pork to expensive Australian beef or lamb, and Australia is in no position to fill the estimated 10-20 million tonne protein shortfall created by ASF.

Indeed, Australia’s red meat fortunes in China have been, and will continue to be, largely dictated by the growth in affluent consumer segments. 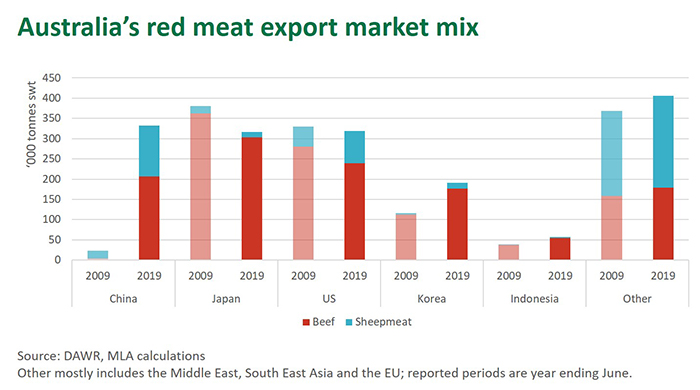 The increase in Australian red meat exports to China has mirrored the growth in households that can actually afford it. Over the past five years, the number of households earning above US$35,000 per annum increased 190% to 12.1 million, and is forecast to increase 175% over the next five to 33.3 million (in contrast, the US had eight times as many such households in 2018 but only grew by 15% over the last five years). It is this fast growing minority of wealthy consumers in China, not the sheer scale of its population, driving demand for Australian beef and sheepmeat. To illustrate, across five key Chinese cities only 4% of lower income earners surveyed had consumed Australian beef in the past month, compared to 36% of upper income earners (MLA Global Consumer Survey China, 2019).

However, ongoing tension between the US and China is testing the continued growth of the Chinese economy. The US had already imposed 25% tariffs on US$250 billion of imports from China and, over the weekend, commenced the first phase of additional tariffs on US$300 billion worth of trade (with remaining hikes scheduled for 1 October and 15 December). China has mirrored each round of US tariffs with duties of its own and recently devalued its currency. As talks have so far failed to resolve deep-rooted tensions between the two powers, further escalation remains a high risk.

For the last four consecutive quarters, the International Monetary Fund has lowered its estimate for global growth for 2019, from 3.9% in July 2018 to 3.2% in July this year, with much of the revision attributed to increased risk related to the US-China trade relationship. Moreover, there are now genuine concerns for the global economy slipping back into recession.

Concerned about a slowing economy, the US Federal Reserve cut interest rates in July for the first time since 2008, citing trade uncertainty, while the US Congressional Budget Office recently admitted tariffs were weighing on the economy. Strong consumer demand has played a critical role in chewing through swelling US meat supplies and holding back the wave of protein from the export market. If current stresses on the US economy transfer into rising unemployment or hit consumer confidence, that growing protein consumption may contract.

While partly reflecting a structural slowdown in the economy, China has also demonstrated signs of strain caused by the ongoing trade dispute. Beijing has so far proved willing to provide stimulus, as it did during the global financial crisis, but a prolonged trade war may test the government’s ability to prop up the economy.

A slowdown in the Chinese economy would undermine the growth in the wealthy affluent class of consumers, limiting the pool of those that can afford premium Australian red meat. A slowdown could also cause the record amount of protein entering China to be redirected to alternative markets that Australia operates in, such as cheap South American beef into South East Asia or New Zealand lamb into the US.

As much at stake as there is to gain

Now the centre of the world meat trade, what happens in China and its trade relationship with the US will have a profound impact on the global market going forward. As much as Australian red meat has to gain from increased meat demand in the wake of ASF, there is more at stake if the Chinese economy were to slowdown. Moreover, the risk of a broader global trade-induced slowdown, at a time of record meat production, remains very real and could hurt demand for premium Australian beef and sheepmeat. In the meantime, Australia must navigate a turbulent global trading environment and economic headwinds in its two largest red meat export markets.

This article, by MLA Market Insights Manager, Tim Ryan first appeared in MLA’s Prices and Markets e-newsletter on 29 August 2019.
This article has been updated from the original.
Subscribe here