In an increasingly competitive world, Australia has some innate advantages in delivering high quality red meat protein to global markets: it is in the right neighbourhood to access growing demand in the Asia Pacific and world-leading shelf-life performance underpins an expanding chilled trade.

However, global shipping and air-freight have been in turmoil over the last year. Consumer demand for goods has vastly exceeded expectations, most notably in the US, and supply chains have grappled with relentless disruptions from COVID-19. With relatively inelastic global shipping capacity, container shortages have been exacerbated, freight rates have skyrocketed (particularly on Asia-US and Asia-Europe routes but also ex-Australia) and bottlenecks have emerged at major ports across the world.

This stretched shipping environment has been thrown further into disarray as key international ports and their surrounding freight networks have gone into lockdown following COVID-19 outbreaks, such as at Yantian Port and, more recently, at Ningbo Port in China. Other sources of disruption have derailed supply chains, such as the blockage of the Suez Canal or industrial action at Port Botany in Australia.

Meanwhile, air-freight has offered little reprieve from such pressures, with passenger planes – which carry the bulk of transnational air cargo – grounded and international flights deterred by caps on passengers permitted to enter Australia.

While exporters in North America, South America, New Zealand and Europe have faced these same challenges, disruption has proved particularly testing and costly for Australia’s chilled red meat trade. Australian red meat exports declined in 2020–21 due to the recovery in the herd and flock and associated shortfall in slaughter-ready livestock – but tight supplies have been compounded by persistent freight disruption.

Air-freight shipments were the first to feel the impact of COVID-19 as passenger flights collapsed. In 2019 (pre-COVID-19), air-freight accounted for 2% of beef exports (8% of chilled beef) and 12% of sheepmeat exports (45% of chilled sheepmeat). Some products and markets, notably chilled lamb carcases into the Middle East, have traditionally been far more reliant on air-freight, as discussed previously. 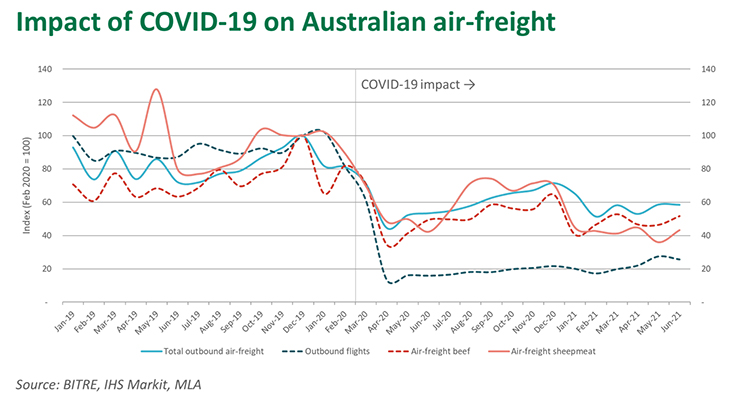 The total volume of all Australian outbound air-freight in 2020–21 declined by 19%, but beef and sheepmeat were more exposed, falling 24% and 30% year-on-year, respectively, as seen in the above chart. Despite support from the Australian Government’s International Freight Assistance Mechanism (IFAM), the sheer lack of planes in the sky has hit red meat exports to certain markets particularly hard.

Despite recent improvements in Middle East shelf-life requirements for imported vacuum-packed chilled beef and sheepmeat primals, this has not facilitated an immediate switch from air to sea-freight into the region for two reasons:

Of the top-five air-freight sheepmeat markets, chilled exports across both modes have still declined by double digits (compared to 4% across all markets).

Interestingly, overall chilled sheepmeat sea-freight exports managed to expand 13% in 2020–21, but this has been driven by markets that already relied upon the mode, particularly the US. Chilled sea-freight sheepmeat shipments to the US were up an impressive 33% last fiscal year to a record 40,900 tonnes swt, bolstered by strong sales of legs through retail and a recovery in foodservice loin demand. While this is positive, the lost trade into the Middle East and the erosion of market share will need to be clawed back from proximate competitors and other proteins that have filled gaps in the meantime. 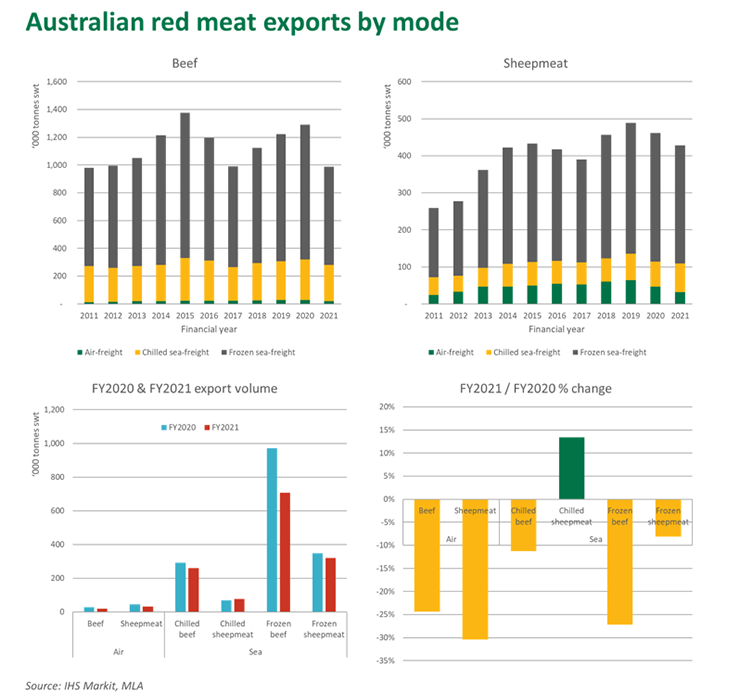 The uptick in chilled sea-freight sheepmeat does not reflect the major challenges faced by exporters in accessing global markets. Furthermore, while sea-freight product may depart Australia as chilled, it may need to be frozen down at substantial loss of premium once landing in market due to delays in shipping and clearing customs. Meanwhile, chilled sea-freight beef exports declined by 11% in 2020–21, while frozen sea-freight beef plunged 27%.

Australia is not alone in the challenges it is facing. US lawmakers are seeking to bolster the power of the Federal Maritime Commission (FMC) to ensure detention or demurrage charges are applied fairly and to compel carriers calling at US ports to accept exports. The ability to coerce the global shipping alliances and resolve freight disruption via domestic regulation remains unclear – regulation is unlikely to address the fundamentals of limited short-term capacity, surging goods demand in rich countries and ongoing disorder from COVID-19 outbreaks.

While unilateral action by the US may alleviate some of its pressures, it could compound freight issues elsewhere as carriers reposition reefer and dry goods containers to the US over other origins, such as Australia. Unlike the US, Australia does not have the economic and trade weight to compel carriers to change their behaviour – enforcing greater rules may simply mean they stop calling, especially when record profits can be made elsewhere.

In the meantime, as sea-freight rates have sky-rocketed and equipment has become scarce, some reefer containers have been converted to dry boxes and repositioned to more lucrative ex-Asia routes, reducing the supply returning to Australia and adding further pressure to red meat exporters.

Moreover, Australian exporters will need to continue navigating disruption from the COVID-19 Delta strain in a turbulent global environment. The temporary shutdown of Yantian Port, which triggered container congestion at other major Chinese coastal ports, was followed by a smaller shutdown in Ningbo Port, and similar disruption is evident across key ports in South-East Asia, most recently in Ho Chi Minh City.

Some sources of alleviation

COVID-19 remains the primary cause of ongoing turmoil to global freight. Getting COVID-19 cases under control and returning to some level of normality will be the most effective solution to the current disruption – however, the timing and degree of that happening remains unclear.

As the adage goes, the other cure for high prices is high prices. Bolstered by the most profitable twelve months on record, major carriers appear to be responding to prices signals and adding capacity via new ship orders that will come online in the next few years, as well as increased purchases of dry and reefer containers.

Australia could also take steps to address the performance of key ports: The World Bank / IHS Markit Container Port Performance Index 2020 and Australian Chamber of Commerce and Industry National Trade Survey paint a fairly bleak picture of the ease of moving goods into and out of the country. Industrial action in Melbourne, Sydney and Brisbane in 2020 and 2021 has added a further layer of uncertainty for Australian exporters.

The most vulnerable product to air-freight capacity is the lamb carcase trade to the Middle East. While the gains on shelf-life requirements may see some end-users switch across to vacuum-packed chilled primals, a preference for carcases, especially through retail, will likely remain in the immediate future. Alternative packaging and freight solutions may be required to shift a greater portion of this carcase trade away from planes and onto ships. In the meantime, the Australian Government announced last week it would extend IFAM program through to July 2022, supporting industry to  sustain trade relationships with key customers in the Middle East and elsewhere.

The digitisation of trade documentation and adoption of electronic health certificates should remove some unnecessary costs and delays to exporting Australian red meat. The Department of Agriculture, Water and the Environment is trialling electronic health certificates in a range of markets, while other importing countries have also adopted digital solutions for receiving documents. The removal of unnecessary documentation legalisation required in some markets could also reduce delays and expand the window to market chilled product.

Other longer-term solutions to freight disruption could lie in greater inter-modal and transhipment flexibility. For instance, Singapore has been trying to position itself as a food re-export hub for South-East Asia, leveraging its connectivity and proximity to markets. However, to date, solutions that maintain the integrity of the Australian health certificate across jurisdictions and offer commercial flexibility have yet to be determined.