June was another positive month for Australian beef exports, with 96,500 tonnes shipped weight (swt) exported. These are strong figures considering eastern states cattle slaughter has consistently tracked below year-ago levels – back 8% on last year for the calendar year-to-June.

Nevertheless, total beef exports are back to a lesser extent, down 3% on 2019 levels. Export volumes have been robust considering the high level of turn-off last year and expectations for tighter cattle supplies this year. Domestic constraints will likely place pressure on export volumes in the coming months, while international demand could fluctuate as COVID-19 lingers within key markets.

Demand factors across the US and China unsettled

The US was the top destination for Australian beef in June at 26,000 tonnes swt, up 30% compared to the same month last year. However, total shipments to the US are back 7% for the year-to-date on 2019. This uptick in exports likely resulted from reduced US beef production through May, which will have flown through into product available for consumption in June. US production levels are now back above typical levels, so demand through July may be slightly subdued relative to June.

Exports to China continue to fluctuate, and in June were just shy of 17,000 tonnes swt, down 25% on June 2019. Reports indicate the market is particularly volatile, with import prices dipping and several COVID-19 outbreaks causing further unease in the country.

There has been a shift in the origin of exports to China, as temporary suspensions placed on four Australian plants in May now appear to be affecting export volumes. The suspended plants are understood to represent approximately 20% of beef exports to China, with three of the four plants being located in Queensland. Of all the beef exported to China last month, Queensland volume share dipped to 45%, while Victoria and NSW both accounted for greater market share than usual. Queensland exports have pivoted towards the US and South Korea, as volumes to these markets lifted substantially in June relative to pre-suspension levels. Exports to Japan last month remained solid at 22,000 tonnes swt, however, were definitely on the lighter side of typical levels. Japan remains the top market destination for the year-to-date, totalling 138,000 tonnes swt through the first six months of the year. Japan leads beef exports to China by 16,500 tonnes swt and the US by 23,500 tonnes swt.

Despite the decline in overall export volumes this year, export values are tracking particularly well, buoyed by elevated domestic cattle prices and a soft Australian dollar through much of the year. For the year-to-May, beef exports have generated A$4.3 billion dollars, a lift of 14% relative to 2019. China has surpassed Japan as the most valuable market, supported by a sharp lift in export price in 2020. Only 20% of the beef exported to China is manufacturing cuts, verses 42% in Japan and 61% in the US, which is helping to drive the value of the Chinese market. 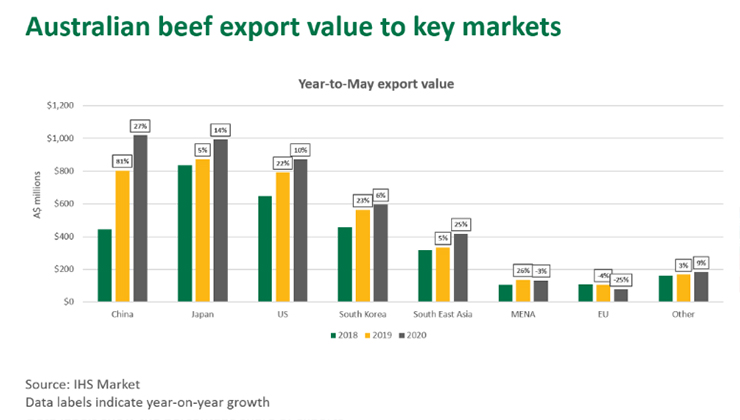