Australia has long been a trading nation, and the red meat industry has played an important part in that history. Over many decades, the fortunes of the cattle and sheep supply chains have ebbed and flowed with the tide of protectionism vs trade liberalisation.

Fortunately, after the market volatility experienced during the 1970s and 80s, some stability was injected into the trading environment with the establishment of the World Trade Organisation (WTO) in 1994. This embedded global trade rules and capped and reduced the tariffs (taxes and duties) Australian red meat and livestock exports incurred when entering global markets.

However, tariff liberalisation stalled following the negotiation deadlock during the WTO Doha Round in the early 2000s. Since then, the Australian government has pursued parallel trade reform via bilateral, regional and plurilateral Free Trade Agreements (FTAs) that have continued the task of reducing barriers to trade. Fortunately, the Australian red meat industry has been a key beneficiary of these FTA initiatives.

This proliferation of FTAs, and the accompanying improvement in access, has opened up new export opportunities, increased market diversification, reduced tariffs (absolutely and relative to competitors) and allowed Australia to build brand equity and capture share in emerging export destinations. 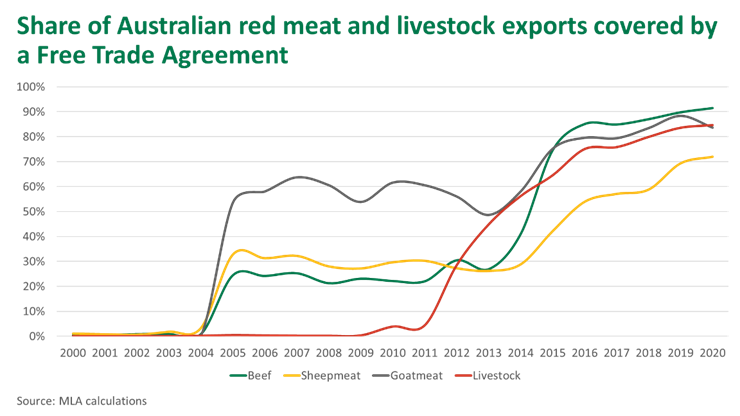 Australia currently has 15 FTAs in force that cover most of the Asian Pacific region (APAC) – notably: the 10 Association of Southeast Asian Nations (ASEAN) member countries, Korea, Japan and China. By comparison, the US has two comprehensive FTAs with APAC partners, Korea and Singapore (ignoring Australia), and a limited deal on agricultural goods with Japan. Brazil and Argentina have no FTAs with APAC partners. Australia’s extensive FTA footprint has provided a competitive edge in APAC – the region that has experienced the greatest imported beef demand growth in the last three decades.

Australia also has bilateral FTAs with the United States and Chile, as well as preferential access to Canada, Mexico and Peru under the Comprehensive and Progressive Agreement for Trans-Pacific Partnership (CPTPP).

With respect to sheepmeat competitors, New Zealand has a similar array of FTAs as Australia, with an agreement with the US the notable exception (although New Zealand does have more favourable WTO sheepmeat quota allocation to the EU compared to Australia).

While the most consequential FTAs occurred in the decade between 2005 and 2015, those agreements continue to deliver gains to this day. The table below highlights a selection of tariff changes that have taken place in 2021 and the eventual preferential tariff delivered via FTAs with key beef and sheepmeat trading partners.

FTAs have stripped unnecessary costs out of the supply chain, which have filtered down to improved farm-gate returns.

And the benefits are significant, with the trifecta of north Asia FTAs (Korea, Japan and China) estimated to deliver around $20 billion in extra export returns over 20 years.

FTAs have also assisted with industry’s quest to minimise market reliance risk. For example, in the decade to 2005, Australian beef exports were heavily reliant on Japan and the US, with these two exports markets accounting for almost three quarters of export sales, on average. In 2020, these two markets, while still very important, accounted for 44% of beef exports and competed against buyers in China, South-East Asia and the Middle East. For all the recent talk of Australia needing a diversified portfolio of markets, beef exports in 2020 were arguably as diversified as they had ever been in recent decades – thanks largely to the expanded opportunities brought forward by FTAs.

Australian sheepmeat exports also enjoy a healthy mix of diversified markets, with carcase balance largely split between the US, the Middle East, China and the domestic market, as well as a wide array of smaller emerging markets in APAC.

Where will the next gains come from?

Industry’s roadmap – Red Meat 2030 – sets forth the goal to secure preferential access in over 90% of red meat export markets. As highlighted in the chart above, the industry isn’t far off this target, but prior gains must be continually defended, and further access delivered, for success on this front to be realised.

Most notably, FTA negotiations are currently underway with both the EU and UK – with the potential to deliver additional opportunities for Australian beef, sheepmeat and goatmeat exports – providing the very restrictive import regimes can be modernised. Future opportunities could exist via negotiating FTAs with India (for sheepmeat) and the Gulf Cooperation Council (GCC) of Arab states, or expanding the membership of the plurilateral CPTPP or Regional Comprehensive Economic Partnership (RCEP) agreements.

Additionally, the Australian government is currently exploring the merits of commencing FTAs with Israel and members of the European Free Trade Association – Switzerland, Norway, Iceland and Lichtenstein – all markets where Australian red meat has had limited trade performance to date.

While securing preferential access via FTAs is vital, in some cases the ensuing benefits cannot be fully utilised if non-tariff barriers (NTBs) continue to prohibit trade or add further costs and compliance risks to Australian exports. For instance, even though Australia has four separate FTAs with Malaysia (a bilateral and via ASEAN-Australia-New Zealand Free Trade Area [AANZFTA], RCEP and CPTPP), an array of NTBs make exporting to the market an ongoing challenge.

Thus, accompanying the FTA reform effort, industry has set a target, as outlined in Red Meat 2030, of reducing the impact of NTBs by A$1 billion by 2030. To meet this target, industry has prioritised issues and mapped out alleviation plans – incorporating working closely with government and in-market partners. Part of that focus will also be remaining vigilant to an ever-changing global trade landscape.

Much remains to be done.