Improved market access, and the successful defence of existing gains, will be critical in achieving industry’s 2030 goal of doubling the value of red meat sales.

Fortunately, Australian red meat and livestock have access to many export markets, thanks to robust integrity systems, an unrivalled disease-free status, and a track record by the Australian industry in partnership with the Government in perusing preferential trade reform.

However, a large number of Australia's overseas markets remain subject to entry barriers. These impediments to trade are imposed in many forms. Border protection measures, including tariffs and quotas, are the most obvious. However, non-tariff barriers and technical imposts are also major issues. While Australian exports have greatly benefited from the reduction in tariffs over the last three decades, non-tariff barriers can often prohibit the industry from fully realising those gains.

In terms of preferential access, the Australian red meat industry’s priority is to secure improved import regimes through ongoing trade negotiations with the EU and the ratification of an agreement with the UK. Additional opportunities for preferential trade reform include improved access to the Gulf Cooperation Council (GCC) countries, India and Taiwan.

When it comes to non-tariff reform, removing impediments in the Middle East, China and South East Asia are the priority.

Note: as tariff rates and quotas can alter, reference should also be made to DFAT’s FTA Portal as well as the tariff schedules available from the relevant authority in the country of interest.

As a major exporting industry, changes in access to overseas markets affect the profitability of both individual livestock producers and meat processors. Approximately three quarters of Australian red meat is now consumed in overseas markets. Access to a wide array of global markets allows Australian exporters to maximise the value of each carcase and reduce the risk of being overly reliant on any one buyer. Dynamic international market conditions require an ongoing effort to defend access and, where possible, secure improvements to export conditions via trade reform.

MLA’s contribution is led by staff in Sydney, and via our overseas offices in Washington, Brussels, London, Dubai, Beijing, Tokyo, Seoul, Singapore and Jakarta, coupled with our network of representatives in South East Asia.

The role of government

Defending market access and securing trade reform are commonly undertaken at a government-to-government level. In so doing, the Australian Government implements an integrated trade policy program with the goal of creating new and more open export markets. This is achieved through three key trade reform avenues: 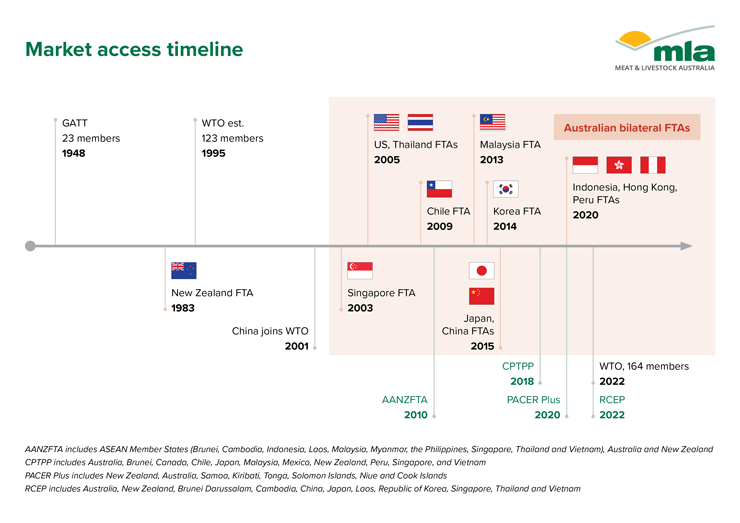 The Australian red meat and livestock industry has been a major beneficiary of FTAs completed to date. This has involved the reduction or elimination of tariffs as well as improvements to other, previously trade restrictive, measures. For example, it is estimated that the benefits of Australia’s the three North Asian FTAs – Korea (KAFTA), Japan (JAEPA) and China (ChAFTA) – will result in a combined $20 billion in extra value for the Australian industry over the next twenty years.

Furthermore, Australia’s recent FTA with Indonesia (IA-CEPA) will eliminate remaining tariffs imposed on Australian livestock and meat exports, while the Comprehensive and Progressive Agreement for the Trans-Pacific Partnership (CPTPP) will further liberalise red meat access into Japan and remove barriers in other markets. 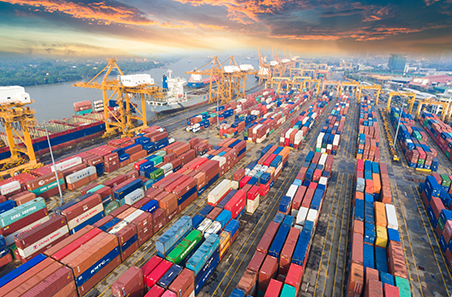 The status on FTAs under negotiation 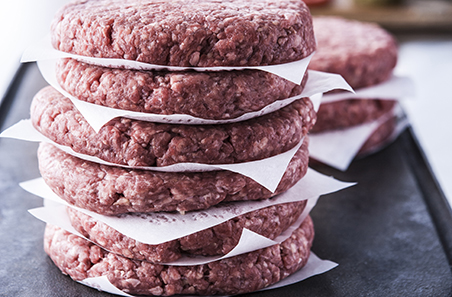