China is unique in being the world’s largest sheepmeat producer, consumer and importer. As such, it can have a profound impact on global sheepmeat markets and trade. In fact, strong demand from China this year, coupled with tight supplies in New Zealand, have been key contributors to the record Australian trade lamb prices in recent weeks.

The country has been Australia’s single largest sheepmeat export destination by volume for the past couple of years and is second, to the US, by value. Australia’s sheepmeat exports to China have seen the largest ever start to the year, swelling 43% year-on-year to an all-time record of almost 55,000 tonnes swt for the January-July period.

Given the increasing prominence of China as an export market for Australia, it is important to be aware of the volatility inherent in the country’s import demand. While it can be difficult to predict when a downturn in import demand is looming, the risk of this occurring at short notice should be considered in long term business planning.

The ups-and-downs of China’s sheep industry

China has a two-track production structure, with a mix of large-scale farms and industrialised processing companies, and small herders with a couple of animals processing batches through local slaughterhouses.

Small herders still represent a significant proportion of producers in China and they principally add volatility to the market, by growing flocks to take advantage of high prices and exiting when prices fall or livestock-rearing conditions deteriorate.

This means that over-production is an ever-present risk and, given domestic production accounts for 95% of consumption, it can have an immediate negative impact on import demand, particularly at the commodity end of the market.

China’s sheepmeat cycles over the past decade: 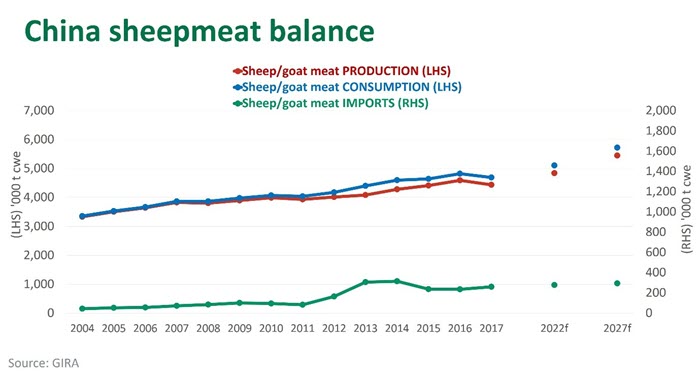 Chinese government policies on grassland preservation, environmental protection, disease control and food safety are favouring larger-scale operations – a growing trend across China’s livestock industries. However, these policies are balanced with poverty reduction and economic development objectives in China’s less developed provinces, with a transition occurring over a long period. Given the current high prices, the potential for import demand volatility may continue in the foreseeable future.

China produces one-third of the world’s sheepmeat, and high prices, growing demand and government support are forecast to underpin growth over the next decade. Between 2017 and 2027, China’s sheep flocks are forecast increase 1.1% on a compound annual growth rate and for production to lift 2.1% (Source: GIRA).

At the same time, high prices, drought and disease are affecting China’s domestic production, and can potentially result in short-term production surges. Much of northern China, where the majority of China’s sheep and goat flocks are raised, has been in intermittent drought for some years, with surface and groundwater at record lows in some places. According to the OIE, between July 2014 and 2018 China reported several outbreaks of Foot and Mouth Disease among sheep. Livestock in drought-affected areas also tend to be more vulnerable to disease. 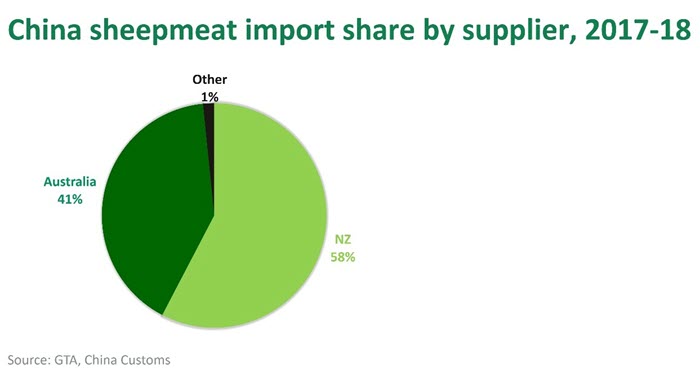 China’s growing demand for a variety of premium proteins, including lamb, will be driven by significant growth in the number of wealthy urban households with high discretionary incomes.

Consumers are upgrading purchases across many product categories, including meat, which means eating larger quantities and of a wider variety. Affluent consumers are seeking higher quality, imported chilled meat products, for consumption at home and through foodservice.

While China’s 2017 estimated annual per capita sheepmeat consumption is relatively low – 3.4 kg per person in China compared to 8.4 kg in Australia – this is forecast to increase to 4.0 kg by 2027, which is significant for a consumer base of around 1.4 billion (Source: GIRA).