Last month, the Organisation for Economic Co-operation and Development (OECD) and the Food and Agriculture Organization (FAO) released their collaborative global agricultural outlook for 2019. This outlook reviews and forecasts price, production, consumption and trade in major meat proteins, providing an indication of the potential global environment Australian red meat will be trading in over the next decade.

Key extracts from the outlook:

Developing nations are driving shifts in meat consumption and production, and projections for the global meat supply indicate continued expansion. Global meat production in 2028 is expected to be 13% above the base figure (2016-2018 average), with 74% of this growth to occur in developing nations. Improving feed use efficiency and more productive grain-feeding systems will lead to higher carcass weights reached in shorter periods. By 2028, China, Brazil and India will add an extra 8.5 million tonnes cwt, 3.5 million tonnes cwt and 2.0 million tonnes cwt, respectively, to the world meat supply annually.

Meat consumption is forecast to increase, albeit at a slower rate than the past decade. While meat consumption is already high in developed countries, strong growth is expected throughout Asia and Latin America, as rising incomes and populations underpin demand for meat. The affordability of poultry and pigmeat has historically made these preferable options in developing markets, but the expanding number middle-income consumers will drive a shift towards higher beef and lamb consumption. 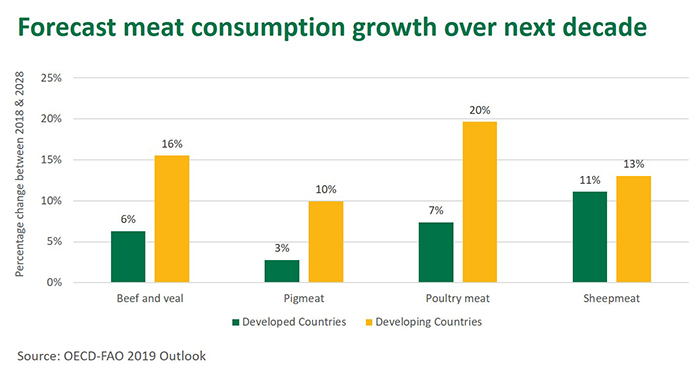 Asia is expected to account for 56% of global meat imports by 2028, with the Philippines, Japan, Malaysia and Vietnam expected to record the highest levels of consumption and import growth, as demand outpaces domestic production capacity.

Global meat exports are predicted to be 18% higher in 2028 compared to the base period. This represents a slightly slower average annual growth rate (1.4%, compared to 3% over the previous decade). Faster growth rates are expected from developing countries, particularly Brazil and Argentina, who will benefit from devalued currencies and decent growth in overall meat production. Australia and New Zealand have cemented themselves as the predominant suppliers of lamb to the global market. While New Zealand has experienced a shift away from sheep farming towards dairy, Australian production is expected to increase in response to broad global demand. It is evident that, despite productivity gains in both countries, global demand growth for sheepmeat will outpace the capability of either major supplier, reinforcing the importance for Australia of maintaining premium brand status and targeting affluent consumers.

While Australia currently accounts for 15.7% of global beef trade, it represents for just 3.6% of global production. Therefore, it is essential Australia targets the most attractive beef consumer and presents a convincing value proposition to maintain premiums and differentiate itself against low cost competitors. Although developing nations, namely from South America, are expanding their share of global exports, beef from Australia is strongly perceived as a high quality, safe and natural product, providing a point of differentiation.

The OECD outlook noted that a number of factors will have a significant influence upon the global trade of meat over the coming decade. African Swine Fever, microbial resistance and climatic events will impact the supply of food, while evolving diets, health and sustainability issues and trading complications all have the potential to shift make up of global trade.