Goat prices on the rise

Goat indicators have continued to climb in 2019, while slaughter has been heavily impacted by ongoing poor seasonal conditions. Find out the latest on slaughter, prices and exports here.

Australian goat slaughter tracked below both the five-year average and year-ago levels for the entirety of 2018, totalling close to 1.65 million head (ABS) – a year-on-year decrease of more than 300,000 head. As goats are predominantly sourced from rangelands in western NSW, the ongoing drought has resulted in producers harvesting a smaller number, contributing to the 20% reduction in slaughter versus last year.

Victoria produced the highest slaughter figures for 2018 at 891,100 head, followed by Queensland (429,522) and SA (226,089). According to National Livestock Identification System (NLIS) data, NSW was the largest contributor to goat production, supplying over 60% of total goats in 2018. 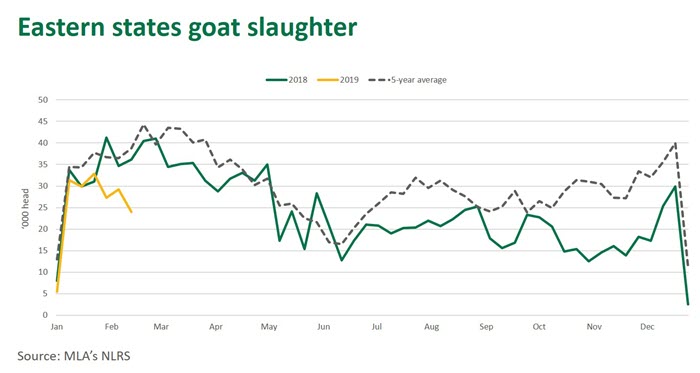 Goat over-the-hook indicators averaged 583¢ in January 2019, 96.5¢/kg carcase weight (cwt) above year-ago levels. The indicator reached 588¢ in February, the highest prices seen since the price correction in July 2017, where prices peaked at 683¢/kg cwt. Over the course of 2018, prices rose 82¢/kg cwt as the persistent dry conditions saw supplies tighten, tracking above the five-year average. 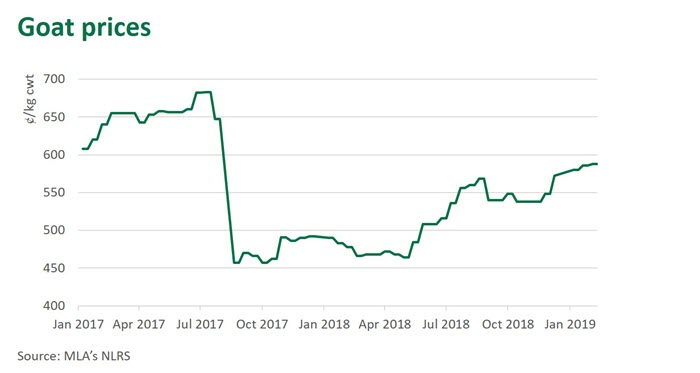 As nearly all of Australian goatmeat is exported to international markets, the reduction in slaughter figures has led to a subsequent decrease in export figures. Export figures for 2018 saw a decrease of 26% on 2017 levels, totalling 21,026 tonnes shipped weight (swt), the lowest levels seen since 2008. The decrease in supply was felt across all major export markets, with each seeing a reduction from year-ago export figures. The US remained the largest market for Australian goatmeat exports in 2018, accounting for 68% of total exports, followed by Taiwan (12%), Korea (6%), Canada (4%) and Trinidad and Tobago (4%). 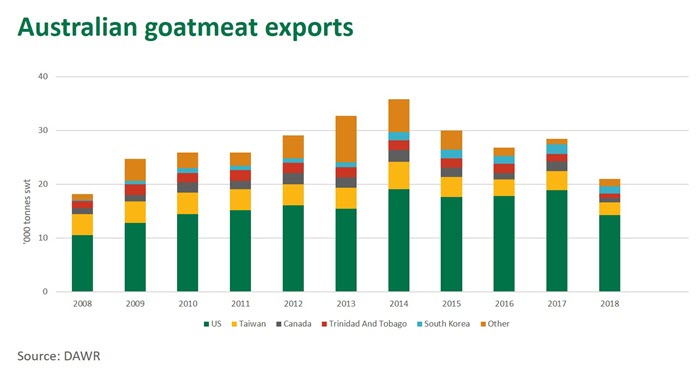 For market information tailored to you, head to MLA Market Reports & Prices