While South America is expanding its export footprint, particularly into Asia, the US remains Australia’s principal beef competitor in global markets. The US is the world’s largest beef producer, has the greatest overlap with Australia’s high value export markets (including the US domestic market) and can produce large quantities of high quality chilled product. As such, movements in the US market can have a significant impact on Australian cattle prices.

While cattle markets in both countries are intrinsically linked, the sheer scale of the US means it has an overbearing impact on the Australian market and leads price movements. The two markets can deviate – as seen during BSE-related trade disruptions or extreme supply movements in either country – but tend to revert to a historical relationship.

After five years of considerable price swings in the US, then Australia, the two markets have aligned to a price spread more typical of normal trading conditions, as highlighted below. 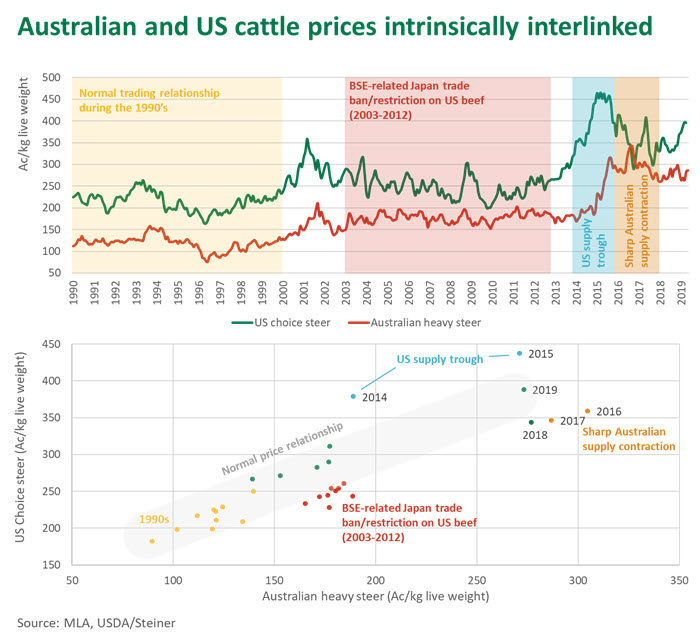 So, what’s the outlook for the US market?

Movements in US cattle prices have largely been dictated by sizeable swings in the herd. Following the GFC and drought-induced liquidation of the US herd – from 96.6 million head in 2007 to 88.5 million head in 2014 – record feeder prices, unprecedented cow-calf profitability and a string of favourable seasons saw it quickly recover in the years following. At the start of 2019, the US herd had recovered to 94.8 million head. A wave of beef production and exports followed this herd growth and is currently placing added competitive pressure upon Australian export markets. Fortunately, a strong US economy and dollar has meant much of this additional beef has remained on the domestic market rather than exported. 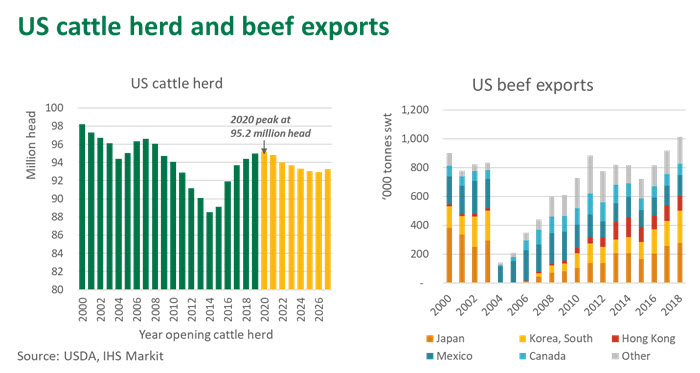 More recently, other changes in the US beef market have been underfoot. US fed cattle futures have come under pressure in recent weeks, as reported beef sales have been seasonally weak, export volumes disappointing and higher than expected market-ready fed cattle inventories have proven bearish. June and August fed futures are trading 11% below where they were eight weeks ago as institutional money tries to mitigate exposure to weak demand in the summer and fall. The spot market has also come under pressure, with the US choice fed steer indicator hitting a 2019 low last week.

Also at play in recent months has been the elevated number of females coming through to slaughter. Females accounted for 50.8% of first quarter total adult cattle slaughter, the highest start to the year since 2002 and above first quarter levels recorded in the previous 2010-2011 liquidation phase. Some of the increase has come from elevated dairy slaughter due to poor margins in the sector but the driver has been a jump in the fed heifer kill. Most, including the USDA, are expecting the US cattle herd to continue expanding over the next year, as cow-calf profitability remains reasonable and soil moisture is favourable for pasture growth. However, if high numbers of heifers continue to be placed on feed and processed, the beef cow inventory may peak sooner than expected. Typically, once the female kill (on an annual basis) exceeds 48%, the US cattle herd enters into contraction, as highlighted below. 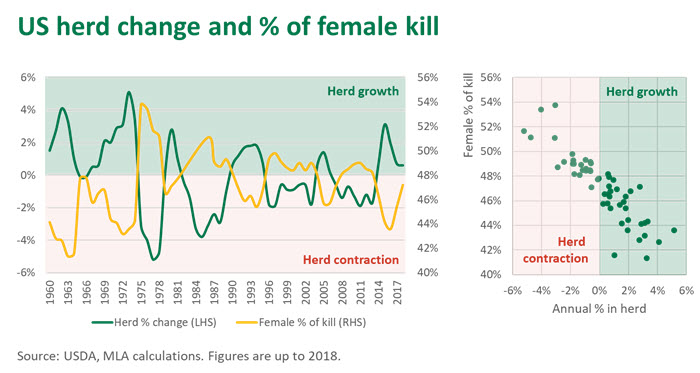 How will all this affect Australian cattle prices?

Recent US cattle price falls are more linked to short-term weather-related sluggish demand, than any fundamental changes in the beef supply. Longer-term, however, the wave of beef production witnessed over the last four years, and the additional 300,000 tonnes swt of beef that’s entered the export market since 2015, may soon hit high tide and may even recede. Assuming underlying beef demand remains robust, that will be good news for US and Australian cattle prices.

Firstly, the full extent of African Swine Fever (ASF) is yet to be priced into US or Australian cattle prices. China beef imports have been surging in recent months but are more related to underlying demand growth and market access changes than consumers switching from pork to beef. However, the impending meat deficit in China in the remainder of 2019 and 2020 will support pricing of all proteins and, if the trade war is resolved and the US ramps up pork exports to China, US consumers may decide to eat a lot more beef.

Secondly, the Australian herd has taken a hammering in the last couple of years, as highlighted in the recent Cattle Industry Projections Update. A string of successful seasons would provide strong incentive to restock depleted herds and, like witnessed in 2016-2017, Australian cattle prices may break from the historical relationship with the US and come under significant upward pressure.