Australian cattle prices out of sync with global markets

Following recent rainfall and tightening supplies, Australian cattle prices have kicked sharply upwards over the last six weeks. During times of rainfall and herd rebuild, Australian prices can often become disjointed from global meat and cattle markets, and this appears to be the case in the current climate. Since the beginning of the year the national Medium Cow indicator has surged by 172A¢/kg and hit 558A¢/kg carcase weight (cwt) last week. In contrast, cattle prices in the US and South America have weakened in recent weeks, as covid-19 uncertainty and swelling supplies have turned markets bearish.

With such rapid and diverging changes in domestic and global prices over the past month, processor’s will have been under pressure. However, it appears that the growth in Australian cattle prices has just begun to ease, suggesting that a potential market ceiling has been reached.

The outbreak of covid-19 led to a sharp drop in foodservice demand and significant congestion through China ports, with imports of red meat unable to be cleared and distributed. With China buyers withdrawing from purchasing meat in February, US import prices sharply adjusted downwards due to reduced competition. While product is once again beginning to flow through China’s ports, concerns have now shifted to the impact on import demand across the rest of Asia, Europe, the Middle East and North America.

Historically, Australian cattle prices tend to reflect the performance of the US 90CL indicator. However, this relationship has de-coupled significantly over the last six months. In the midst of booming global demand late last year, the 90CL indicator sharply rose without comparable growth being realised in Australian prices (represented by the large grey spike in the graph below) due to the dry conditions driving elevated cattle slaughter. However, with the recent widespread rainfall across many regions in Australian and the disruptions caused by covid-19, this gap has rapidly disappeared, with the current spread back 75% on that seen just three months ago and well below the five-year average. 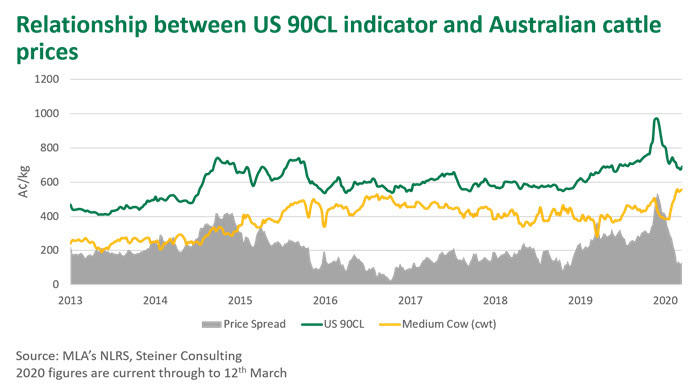 Australian prices have been supported by renewed restocker demand, however, at this level the Australian market is falling out of step with global competitors, where prices have begun to reflect the current uncertain demand outlook. Producers making longer-term trading and budgeting decisions should be mindful of Australia’s unique market environment in this current global context.

Currencies of major beef suppliers have all depreciated against the US dollar in the past two months. The A$ fell to 58US¢ on Wednesday. Fortunately, the downturn in the Australian dollar has helped to cushion the sharp decline in the US 90CL beef indicator and export prices more broadly. 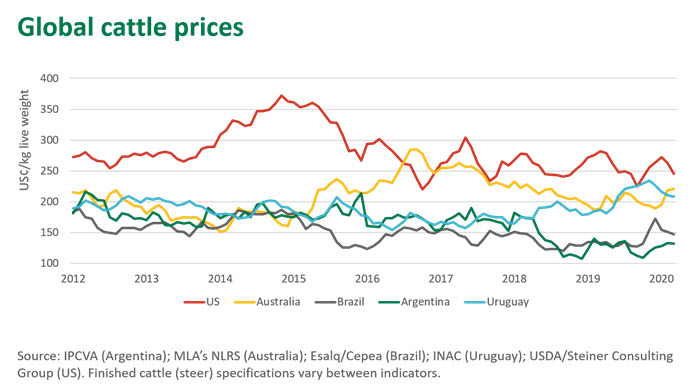 US futures take a hit

US cattle futures have fallen sharply in the past week, as ongoing uncertainty regarding the broader economy, consumer demand and the potential impact on processing capacity has rattled markets. Similarly to Australia, retail channels in the US are currently struggling to keep up with orders as consumers rush to stock up on meat supplies, while foodservice channels face significantly reduced turnover. While US cattle prices have been pressured lower, the strength of the greenback has partly offset these falls for global importers.