For the week ending 14 August, the National Livestock Reporting Service (NLRS) reported eastern states cattle slaughter at 97,800 head, a 30% decline on year-ago levels and the lowest weekly winter total recorded since the week ending 1 August 2008. The lower turn-off has been exacerbated by reduced processing capacity and a tightening supply of finished cattle across the eastern states. In Victoria, cattle slaughter eased 27% on the week prior to 14,900 head. In Queensland, processor throughput eased 28% from last week to 43,500 head, while New South Wales turn-off increased 8% to 31,000 head. 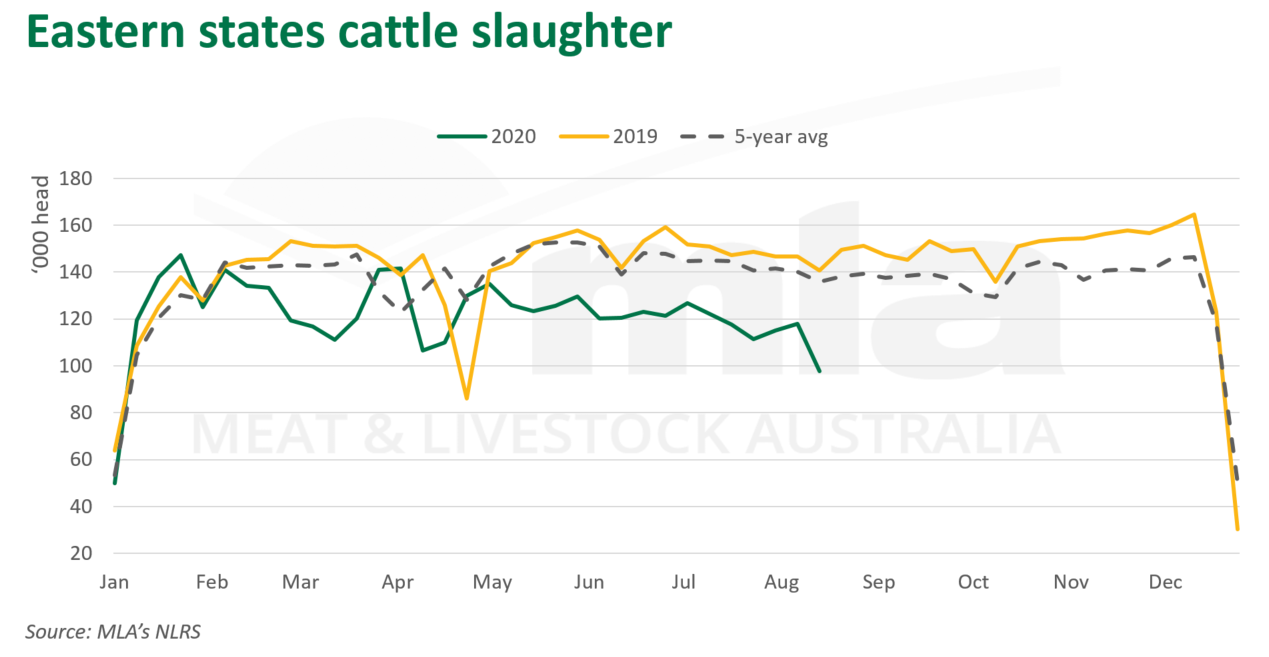 Finished cattle prices remain buoyant as processor throughput has come under great pressure and producer intentions to restock has intensified competition with processors for the limited pool of suitable finished cattle. On Wednesday 19 August, the eastern states medium and heavy steer indicators were reported at 361.25¢/kg and 374.5¢/kg lwt respectively, up modestly on the week prior.

Over the hook (OTH) prices for the week ending 14 August, compared to the previous week:

Good rainfall in recent days has sustained the strong restocker intent from southern states, in particular New South Wales. Combined with the low availability of young cattle, the store market has continued to gain momentum, moving into record territory this week. Demand for suitable feeder and backgrounder cattle in Queensland remains robust, however, on the back of the late autumn break, the state will be looking for the positive Bureau of Meteorology rainfall outlook to come to fruition in the coming months.

Strong southern restocker demand for northern store cattle has underpinned the Eastern Young Cattle Indicator (EYCI) hitting a record 776¢/kg carcase weight (cwt) on Wednesday 19 August, up 17.5¢ on the week prior. The majority of Queensland yardings increased significantly, with yearling and vealer saleyard throughput experiencing the largest increases. Roma yardings lifted 50% on last week to 5,850 head. Despite the lift in yardings, prices found support with 0–200kg yearling steers and heifers up 28¢ and 75¢, respectively, with both averaging 487¢/kg live weight (lwt).