Korea’s beef import safeguard – what is it?

The beef import safeguard is a mechanism that allows Korea to increase tariffs temporarily once imports exceed an agreed level under the Korea-Australia Free Trade Agreement (KAFTA). The safeguard volume for 2020 is 174,087 tonnes shipped weight (swt) and increases by 2% each year. As of 11 November, Australia has utilised 97.3% of the safeguard volume with approximately 4,737 tonnes remaining. Once the safeguard volume has been realised, Korea can raise the tariff for Australian products from 21.3% to 30% – effective until 31 December 2020. From 1 January 2021, the tariff rate will revert to 18.6% for Australian beef (Source: DFAT FTA portal).

Note: the safeguard volume was calculated during KAFTA negotiations, using the average of 2007 to 2009 Australian beef import volumes (using Korean import data) plus an additional 10%.

What are the implications for Australia?

Competition in the market

The US is Australia’s major competitor in the Korean imported beef market. The US tariff will remain at 16% due to a greater safeguard volume (318,000 tonnes swt) under the Korea-US Free Trade Agreement (KORUS). 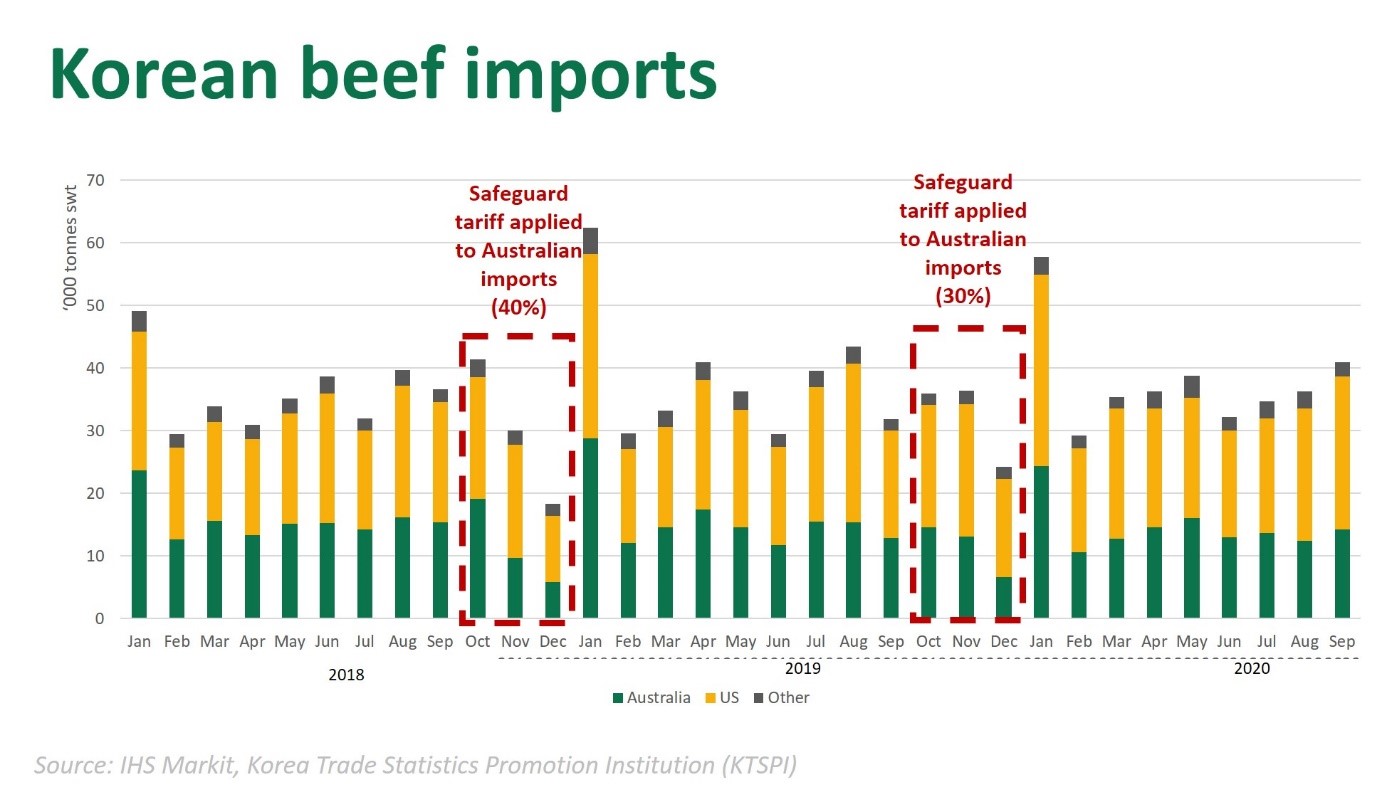 In 2019 Australia triggered the beef safeguard on 17 October, however, this year it has been delayed by a month due to Australia’s tight cattle supplies and the ongoing impacts of COVID-19 on the global trading environment. The higher tariff, as a result of triggering the safeguard, can impact the market, however, as it is occurring almost a month later than in previous years, it may not impact trade as heavily, with less time remaining before it resets on 1 January 2021.

Although tight domestic cattle supplies have limited Australia’s ability to serve the market in 2020, it is possible that Australia will trigger the safeguard again in 2021, as the remainder of Australian exports in 2020 will carry over and count towards the 2021 safeguard.

Other contributing factors to future demand include price movements from both Australia and the US, exchange rates, the ongoing African Swine Fever outbreak in Asia as well as the global response to the COVID-19 pandemic.

You can find out more about the Korean market in MLA’s Korea market snapshot.