What can be made from the US-China Phase-One agreement?

After two years of tit-for-tat trade warring, the US and China attempted to address core issues through an initial trade deal last week. In the current political climate nothing is guaranteed but, if key features of the deal materialise, the implications for global agri-trade could be sweeping.

A key feature of the deal is the rebalancing of two-way trade, with China committing to increase purchases of US exports by US$200 billion over the next two years, including an additional US$32 billion of US agricultural products (relative to a 2017 baseline). While grains, especially soybeans, will account for the lion’s share of that trade, meat will need to take on a significant portion if this commitment is to be met. However, over the twelve months to November 2019, US meat and offal exports to China were worth just shy of US$1 billion – 90% of which was pork and pig offals. 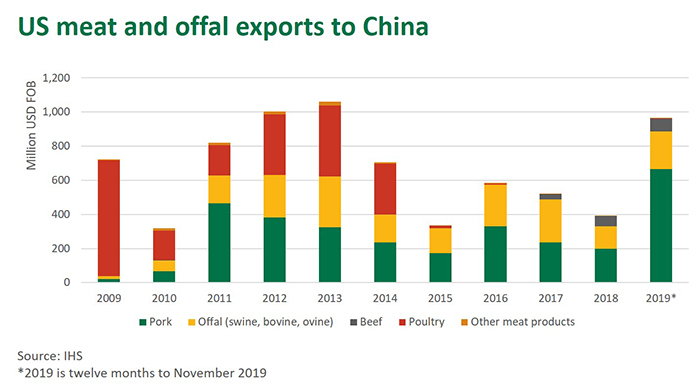 The US has technically had official access to China since 2017. However, strict HGP-free, cattle age and traceability requirements proved largely prohibitive for a significant trade to develop. The small trade that did initially emerge fell victim to escalating tariffs.

However, the recent deal removes many of the restrictions on US beef, including:

Under the agreement, China has thirty days to implement many of the changes. However, the timeframe as to when that will translate into beef on the water is less clear.

Critically, beef from cattle treated with ractopamine, a widely used beta-agonist in the US, is still banned from entering China. Given ractopamine is predominantly used in the latter stages of finishing, US lot feeders will likely be able to read market signals and decide whether to go ractopamine-free and tap into Chinese demand or use ractopamine and gain a production boost. Hence, if China is willing to pay an attractive enough premium, the US could likely direct beef from fed cattle to the market within two months.

However, the trade deal text also outlines a risk assessment on ractopamine use will be conducted and a joint working group established to inform future protocol revisions. This signal alone may mean lot feeders hold off dropping ractopamine until the risk assessment is concluded.

Additionally, the Phase-One trade deal has not wound back the existing 47% tariff on US beef imported into China however this could be reduced, waived or bypassed in future.

By and large the Phase-One trade deal has left the US beef industry in a far stronger position than where it was prior. So, what type of trade may materialise? And how may this impact Australian beef exports?

US beef to gain foothold in China

China has emerged as the leading global importer of beef over the last two years, overtaking the US for top spot in 2018 and expanding that lead throughout 2019.

China’s economy, despite a moderation in growth rates, is shifting from investment to consumption-led, and rising incomes are underpinning demand growth for meat. The rapid expansion of an affluent consumer class has also fuelled demand for better quality, often imported, meat. Add a massive pork deficit from the rampant spread of African Swine Fever (ASF) and China’s meat imports have surged.

With current market dynamics, it’s unlikely US beef will be in a position to muscle-out Australian product in China. However, there may be some channels where US beef may present greater competition. Or, if Chinese demand subsides (say, through an eventual recovery in its pig herd or an economic contraction) competition may intensify as more supplying countries battle it out over a smaller imported beef market.

To gain an understanding of what and how much the US may export to China, one can look around the region. The US consumes 90% of what it produces, and exports are largely specialty cuts that can’t find a buyer, or command a premium, on the domestic market. Due to the US obsession with burgers, most trim and hindquarter cuts remain at home, while select forequarter cuts are shipped to North Asian where they complement the cuisine. US steaks also have a strong presence across Asia. 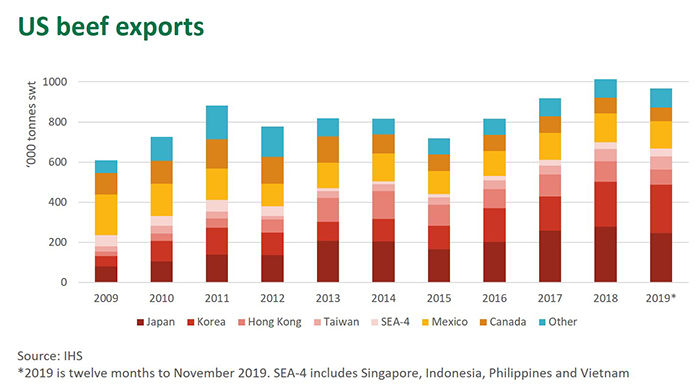 The US exports predominantly chucks, briskets and loin cuts to Japan; short ribs, chucks and loin cuts to Korea; and short ribs, chucks, blades and loin cuts to Taiwan. Australia exports a similar selection of cuts to these same markets but is also able to supply hindquarter cuts and manufacturing product. Most US beef into North Asia is grainfed choice or prime grade beef, while Australia supplies a mix of grainfed and grassfed product. While there will be some overlap, especially in higher-end foodservice, the vast majority of Australian beef enters channels in China outside the reach of US product.

The appeal of US beef in the Chinese consumer is yet to be adequately tested. Furthermore, the US will face an uphill battle in delinking itself from the association of being treated with HGPs. Resulting from years of food safety scandals, many involving meat, Chinese consumers are particularly sensitive about additives and non-natural substances used in meat production. Hence, China is the only one of 14 key markets that rates ‘no additives’ in the top-five attributes for ‘safe meat’ (Source: MLA Global Consumer Tracker, 2018). Chinese consumers claim much higher awareness and previous consumption rates of organic, GMO-free, hormone-free and antibiotic-free beef than their global counterparts (Source: MLA Global Consumer Tracker, 2019). Chinese consumers have a high level of affinity for Australian red meat, which has a strong reputation for safety. A lack of market presence means consumers are still relatively unfamiliar with US product. 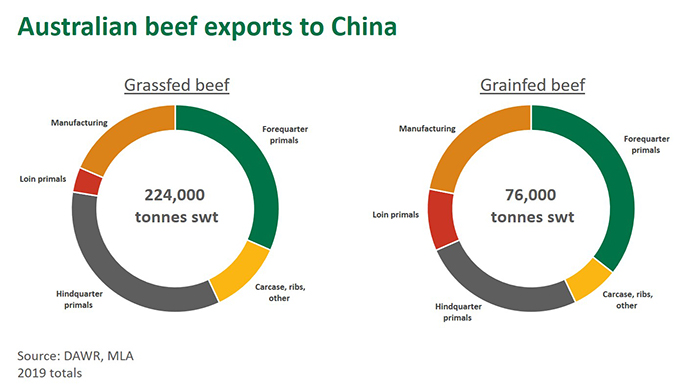 US beef is an expensive product, compared to poultry, pork, South American beef and, in most instances, seafood in Asia. A buyer in Asia needs to compete with the 366 million relatively wealthy consumers in the US, and then pay the freight and tariffs to get it to market. On specialty cuts, Chinese buyers may also need to compete with existing and well-established US export markets – such as short rib into South Korea. If China can draw US beef away from other Asian markets, this may also leave gaps for Australian product.

While ASF supports the case for imports, US beef will not be the solution to China’s immediate meat needs. As such, the size of the affluent consumer market, not the massive pork shortfall from ASF, in China is probably a better indication of the potential demand for US beef. While there are many factors that shape the size of a market (cuisine, trade barriers, culture, demographics, competitive mix, etc.), the number of households earning more than US$35,000 per annum is one crude measure of those who can afford premium imported beef.

The figure below compares the relationship between the number of these households in Asia and the corresponding size of US beef exports to each market. Applying this regional relationship to the number of wealthy households in China last year equates to the annual trade potentially reaching 200,000-250,000 tonnes swt, a size comparable to Japan or Korea for US exports. 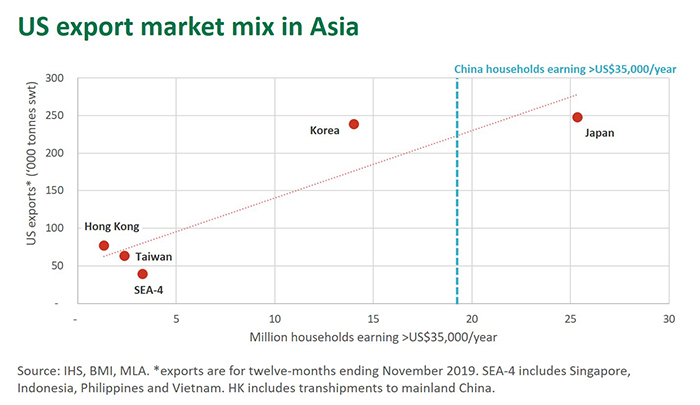 Such a sizable volume would be difficult to create overnight however it highlights the potential trade that could emerge in time. A more conservative 50,000-100,000 tonnes swt per annum may be more in line with expectations in coming years – a relatively modest volume in comparison to the entire 1.6 million tonne China imported beef market in 2019.

However, many questions remain as to how the US-China beef trade will develop and what volumes may actually eventuate. Is there adequate infrastructure in China to receive chilled beef and freezer capacity in the US to ship frozen product? Will the China premium be attractive enough for US lot feeders to wean production away from ractopamine? How will Chinese consumers respond to US beef without existing brand loyalty? How will tariffs be applied? Can the US be price-competitive in China?

US pork and poultry set to fill meat gap

Two key forces suggest pork and poultry will account for a far greater portion of US exports to China: firstly, China requires an affordable source of meat to offset its domestic pork shortfall and feed its population; and, secondly, China needs to encourage large purchases of products to go some way to achieving its US$32 billion purchase commitment of US agricultural products.

China had already lifted a ban on US poultry in November. The US was previously the market leader in poultry exports to China but the ban – imposed due to concerns of avian influenza in 2015 – allowed Brazil to dominate the market over the last five years. In 2008, US poultry exports to China peaked at US$720 million, or almost 800,000 tonnes swt.

After expanding about 50% last year, conditions are ripe for China poultry imports to record equally impressive growth in 2020, boosted by the re-entry of US product. The Phase-One deal also included a regionalisation provision, buffering the US poultry industry from country-wide trade bans in the case of future disease outbreaks.

US pork exports to China are also in a position to expand. Ractopamine-treated pork remains banned in China but much of the US pig industry has moved to ractopamine-free production, adapting supply chains away from treated product to ensure market access. The greater determinant of export growth will be if and how the existing 68% tariff is applied to US pork in future.

Despite tariffs, however, US pork exports to China still increased threefold year-on-year, to over 300,000 tonnes, or about US$670 million, in 2019. If tariffs were wound back, the US would overnight become one of the cheapest and largest sources of pork to China, igniting a rapid increase in trade.

While the recent thawing of US-China relations may stimulate significant growth in meat traded between the two nations, nothing is guaranteed in the current climate. In particular, US politics ahead of the 2020 presidential election and the willingness of China to meet its purchase commitments could easily derail any trade war truce.