Mutton prices on the rise but pressures loom

On Tuesday 16 February, the National Mutton Indicator lifted to 638¢/kg cwt, after a brief correction in January saw the indicator dip below 600¢/kg cwt. However, for January, the indicator tracked 36¢/kg higher than the same month last year, averaging 597¢/kg cwt.

While mutton prices are typically guided by export demand, the strength of the current market has largely been driven by tighter supplies. With the flock recovery underway, heightened retention of productive ewes has resulted in smaller yardings across the eastern states. For the week ending 12 February, eastern states sheep slaughter was reported at 100,600 head, down 27,000 head on the same week last year.

Since the start of the year, the NSW Mutton Indicator has maintained a premium to the other states, averaging 675¢/kg cwt on Tuesday 16 February. The turnaround in conditions in the eastern states has seen producers in a better position to increase stocking rates and retain ewes for breeding purposes. Inversely, large parts of WA remain drought affected, which elevated throughput over the last quarter. Subsequently, the Western Australia Mutton Indicator has moved in the opposite direction, tracking down since the start of the month to average 529¢/kg cwt on Tuesday 16 February.

Looking ahead, mutton prices could come under pressure on the back of heightened supplies. The lead up to autumn typically sees destocking of unproductive sheep and investments in the genetic composition of flocks ahead of joining. Additionally, softer wool prices could result in more Merino types being brought forward to capitalise on stronger mutton prices. 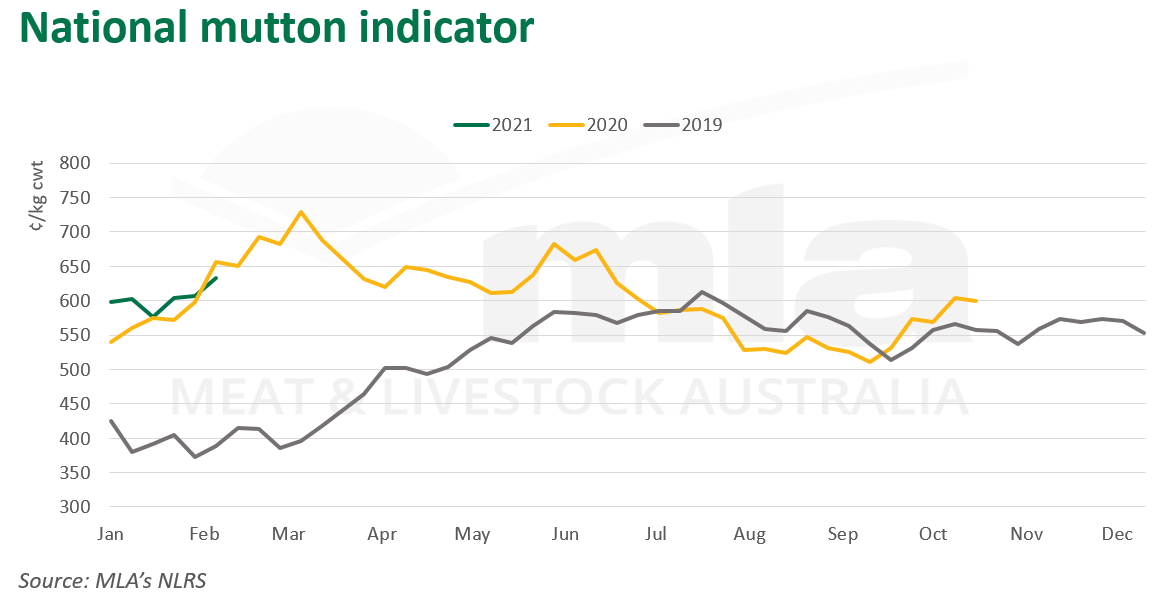