Australian red meat and live cattle exports are set to benefit from the Indonesia-Australia Comprehensive Economic Partnership Agreement (IA-CEPA), which was finalised on 31 August 2018 and is expected to be signed by the end of the year.

IA-CEPA will provide tariff elimination for those red meat and livestock lines not addressed under the ASEAN-Australia-New Zealand FTA (AANZFTA). Non-tariff barriers including import permit restrictions, quotas or other trade hurdles, especially for live cattle exports, are also tipped to improve with the IA-CEPA in place.

Chair of the industry’s IA-CEPA taskforce David Foote said that Indonesia is a vitally important customer for significant quantities of Australian live cattle, beef and offal and has a steady requirement for sheepmeat, albeit smaller volumes.

“IA-CEPA will not only deliver additional trade liberalisation by building on the ASEAN-Australia-New Zealand FTA (AANZFTA) outcomes, it will also provide a framework for a more market orientated import regime. This in turn will deliver benefits for both our sector as well as the Indonesian supply chain – including importers, retailers and foodservice operators,” Mr Foote said.

“On behalf of the livestock and red meat industry, I extend our thanks to the Australian and Indonesian negotiating teams for their tireless effort over several years.

“IA-CEPA is a most welcome addition to the suite of FTAs the Australian Government has concluded to date with key trading partners.”

Note: no quota or import permit restrictions apply to any boxed red meat or offal exports.

Beef is the third most consumed protein in Indonesia; however, it is perceived to be the most important source of protein. Beef is used widely in local cuisines and is a popular meat served during celebrations and festivities. Indonesia’s total beef consumption is estimated to be around 770,000 tonnes carcase weight (cwt) in 2018 and is expected to grow 9% by 2022 to 839,000 tonnes cwt (Source: Gira). 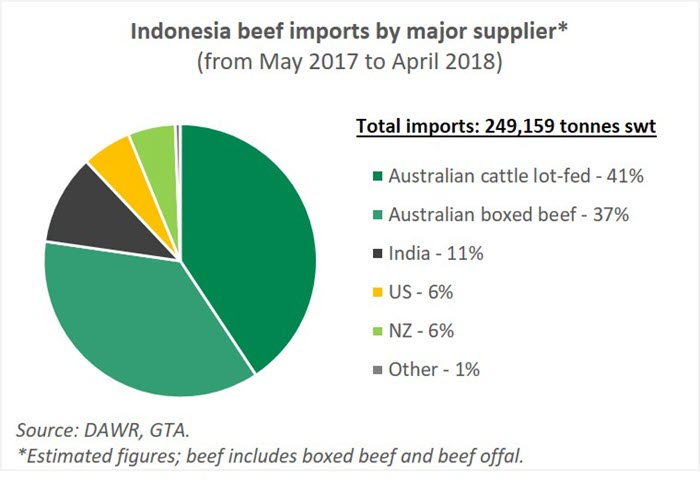 In Indonesia, lamb is seen as the second most preferred meat after beef and one that consumers are most willing to pay more for due to its taste, tenderness and perceived high animal welfare attributes (Source: MLA Global Tracker Indonesia 2018).

Australia and New Zealand are the two sole suppliers of sheepmeat to Indonesia, with Australia representing almost 98% of total imports. Australian sheepmeat in Indonesia is largely utilised in the foodservice sector, with loin cuts popular in high-end hotels and restaurants, and other cuts used in dishes such as satays, soups, grilled thin-slice and roasts. 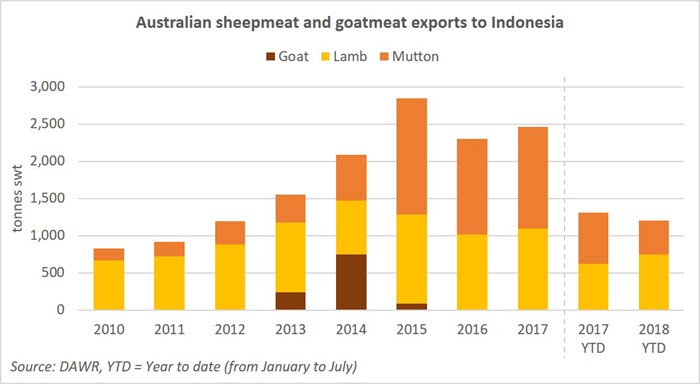