The outlook for global sheepmeat demand remains largely positive, but it isn’t without risk.

The Australian sheepmeat industry has completely transformed over the last three decades, with many producers transitioning from wool to an increased meat focus. Although the sheep flock declined from 170 million head in 1990 to an estimated 68 million head in 2018, lamb production has broken fresh records in recent years. Just as noteworthy has been the Australian industry’s expansion into global markets, breaking away from New Zealand to become the largest exporter of sheepmeat.

Week-to-week saleyard price movements principally reflect seasonal conditions as well as the timing and size of the annual spring lamb crop; however, the steady year-on-year rise in prices in recent years has been propelled by global forces.

The outlook for global sheepmeat demand remains mostly positive, but growing calls for protectionist trade policy in international markets and signs of weakness in the global economy have presented some risks.

Sheepmeat a niche in a global markets

While sheepmeat may be big business in Australia, it remains a niche component of consumer diets around the world and is dwarfed by the beef, pork and poultry trades.

Australians eat little sheepmeat compared to beef and chicken but are actually relatively high consumers by global standards. On average, sheepmeat accounts for just 4.5% of global meat consumption and is near non-existent in many countries.

While largely void of any religious taboos, many consumers remain unfamiliar with how to purchase, prepare and cook sheepmeat, and consumption can often be concentrated within certain ethnic groups or foodservice channels.

Given the global rise in sheepmeat prices around the world, it remains out of reach of many consumers or is restricted for special occasions, such as religious festivals. Hence, having access to global markets and exporters being able to develop a suite of targeted opportunities is critical in maximising carcase value.

As highlighted by agri benchmark data, world sheep producer profitability has been nothing short of outstanding in recent years – but many countries remain niche producers, domestic-focused or constrained by resources and fragmented supply chains.

New Zealand remains Australia’s primary competitor on the global market. However, it’s also been faced with supply constraints, unable to lift productivity sufficiently over the last decade to arrest the impact of a decline in the national flock. For a while, exports were maintained at the expense of the New Zealand domestic market, but now that pool appears exhausted and exports have plateaued. 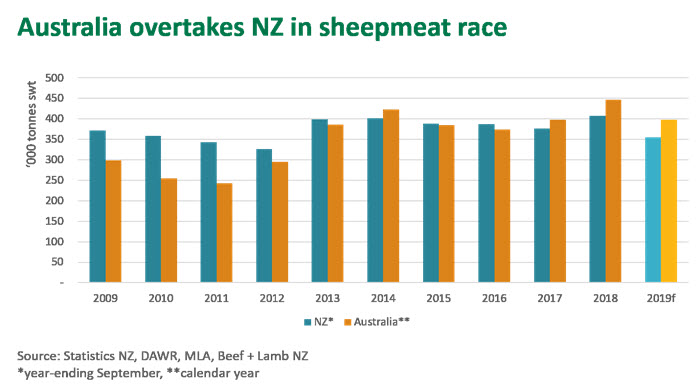 The emergence of China

China has rapidly expanded sheepmeat imports over the last decade, massively impacting global markets. China is the world’s largest producer, consumer and importer of sheepmeat. In less than a decade, China has risen to be Australia and New Zealand’s largest export market on a volume basis. The majority of product remains lower value cuts – such as frozen breast and flap – largely utilised in a variety of stir fry, stew, soup, dumpling and hot pot dishes. However, there’s also been an increase in demand higher value cuts.

Domestic production in China hasn’t been able to keep pace with growing demand. The Chinese sheep industry is cyclical in nature, with opportunistic small-scale producers in poor provinces entering and exiting depending on the market.

Given 95% of consumption is domestically produced, small shifts in local supplies can lead to major swings in import requirements. Pre-empting the cycle is difficult due to a broad range of interconnecting factors – from Chinese government policy on food security and rural development, to ongoing drought and resource constraints in Inner Mongolia and Xinjiang.

Australian sheepmeat exports are yet to be affected by the continuing US-China trade war. However, the countries represent two of Australia’s largest export markets, and access and demand conditions in both remain critical. 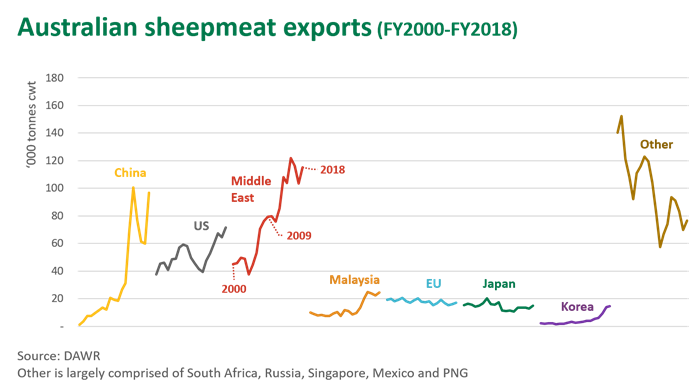 There are also concerns regarding the broader health of the global economy – with sheepmeat often positioned as an expensive premium product, a global slowdown and reduced consumer purchasing power will hurt demand for Australian lamb and mutton.

While these remain risks for Australian sheepmeat, a lack of production growth from New Zealand or any major competitor, as well as a widening supply shortage in China, places the industry in a solid position to continue capturing value.

Want market reports and prices tailored to you?