June import data shows the demand for animal protein in China continues to thrive across all species. Driven by the pork shortage caused by African Swine Fever (ASF), import demand has accelerated since early 2019. Estimate conclude that ASF has destroyed approximately 40% of China’s pig herd, with industry recovery likely to take several years.

June import volumes highlight the demand for protein, with total meat imports reaching 873,000 tonnes shipped weight (swt), just shy of the record 902,000 tonnes swt in March. However, the March figure likely included carry over from port disruptions caused by COVID-19 in January and February, which indicates that demand is likely still increasing. 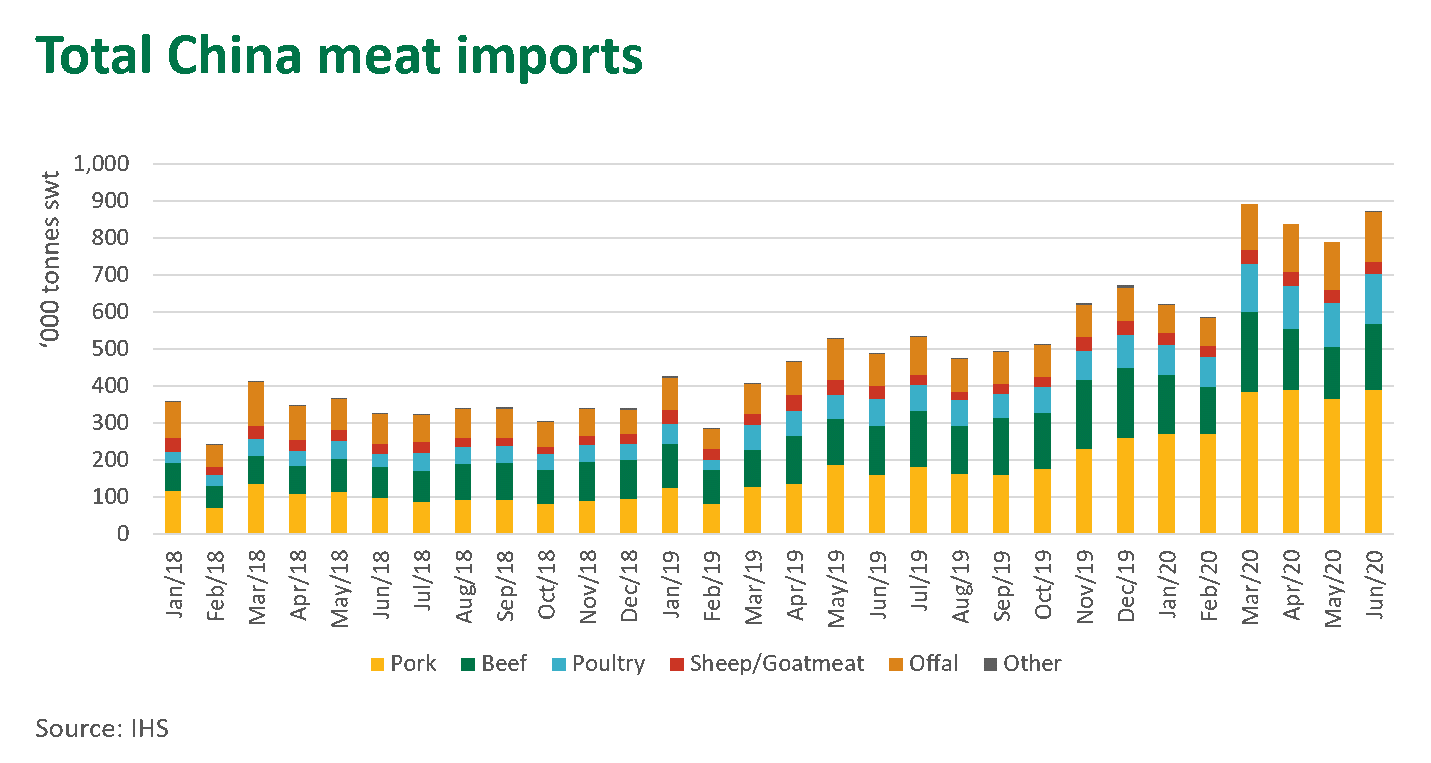 Year-to-date pork imports are up 153%, with supplies from the United States, Spain and Germany responding to increased demand. However, despite the increased imports, China pork prices at retail are still almost double what they were a year ago.

Beef imports are up 43% for the year-to-date, with Brazil and Argentina the top two suppliers to the market. As discussed earlier this month, Australian exports to China have softened, with South American nations picking up the shortfall. Relative to the five-year average (2015–19), Brazil and Argentina have grown their market share to 35% and 22% respectively, while Australia’s share has contracted from 19% down to 16% this year. With an increasing reliance on South American suppliers, combined with Australia’s supply contraction, this shift in China market share is unsurprising.

While import volumes of beef and pork have increased, imports of sheepmeat are one of the few species categories to show some contraction this year – down 4% on 2019 levels, primarily driven by supply factors out of both New Zealand and Australia. However, a number of additional factors have been influencing market demand this year. For instance, the majority of sheepmeat is used in hot pot restaurants which have been affected by COVID-19 restrictions. Furthermore, GIRA figures show that China’s domestic sheep/goat meat production in 2020 has lifted 2.6% compared to year-ago levels. Regardless, Australian export prices for lamb and mutton have lifted 2% and 9%, respectively, on 2019 levels, which will help to generate additional value amid periods of constrained supply.

There have been some volatile currency movements in the past month, which have affected beef export prices. The Australian dollar has appreciated and now sits at US73¢, while the Brazilian Real and Argentinian Peso continue to decline in value against the US dollar. This is reducing the competitiveness of Australian beef.

Australia’s beef exports to China are valued at AU$1.2 billion for the year-to-June, up 16% on 2019 levels for the same period. Australian grainfed exports to China have been growing this year, and now account for a third of all exports, up from 25% in 2019. Additionally, Australia remains the primary supplier of chilled beef to China, occupying total market share of 79% for the year-to-date, which is another key factor contributing to the growth in export value.

China remains a key destination for Brazilian beef, with reports indicating that July exports to China were an impressive 87,000 tonnes swt. The performance of Brazil’s domestic market, combined with a lack of access to destinations such as Japan and South Korea, mean that Brazilian packers are particularly reliant on the China market. While South American beef exports to the US have lifted, this is off a relatively low base. 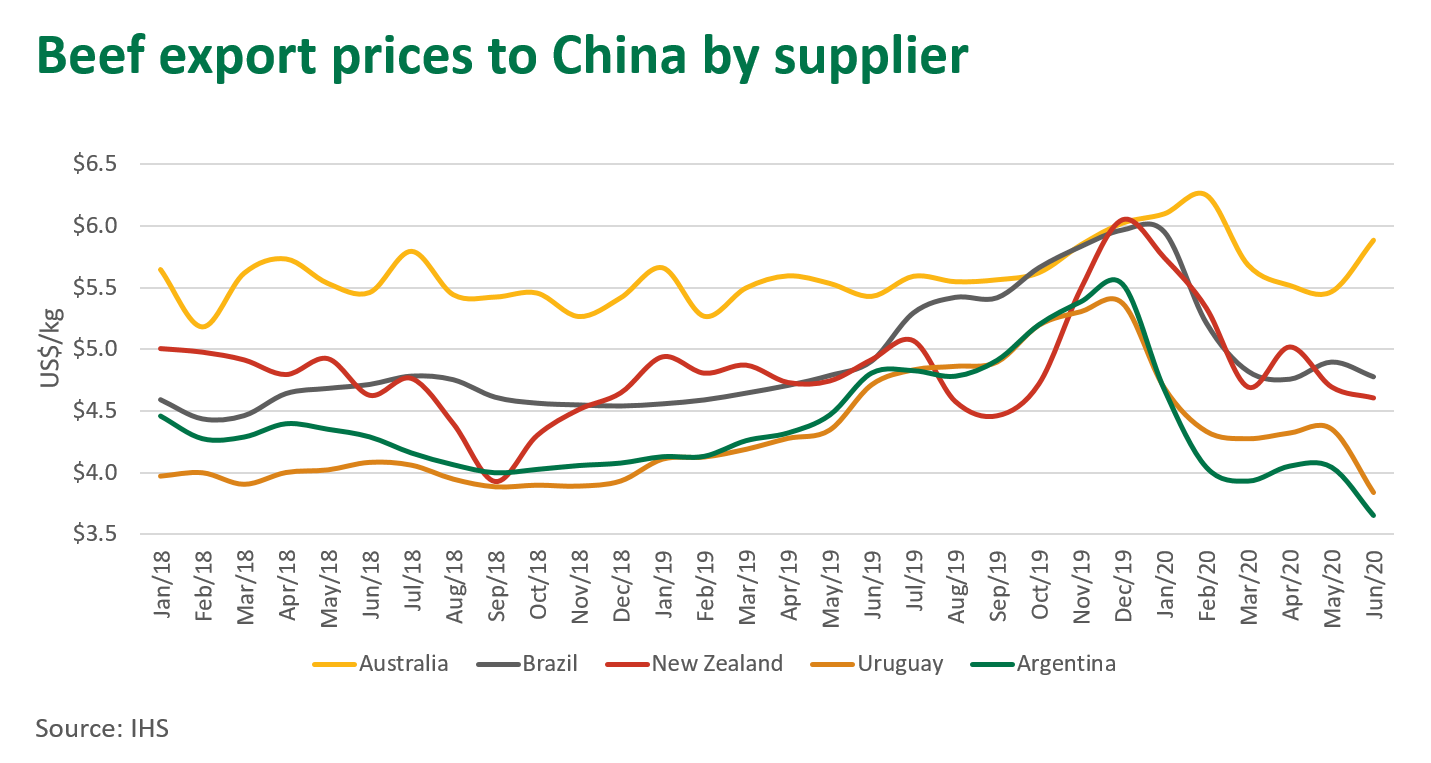 Despite economic impacts from COVID-19, the recent outlook from the OECD-FAO indicates the ASF-induced pork import demand surge will provide support to export prices in the short-term, as will the growing number of affluent households who seek high quality protein.