Lamb and mutton exports have recorded year-on-year declines over the last four months, reflecting the substantial turn around in seasonal conditions and sharp contraction in slaughter-stock supplies. Mutton shipments, in particular, have come under significant pressure, back 16% for the year-to-date, while lamb exports have also cooled, back 13%.

May shipments came under acute pressure, with mutton exports falling 45% year-on-year to 6,900 tonnes swt, while lamb exports are back 39% at 17,900 tonnes swt. While COVID-19 has caused some disruption to the export market-mix, the decline in shipments principally reflects the short-term limited supply of animals coming through to slaughter. The one Victorian processing plant that had an outbreak of the COVID-19 virus among staff did not create a substantial impact on the state’s smallstock processing capacity or on trade volumes. 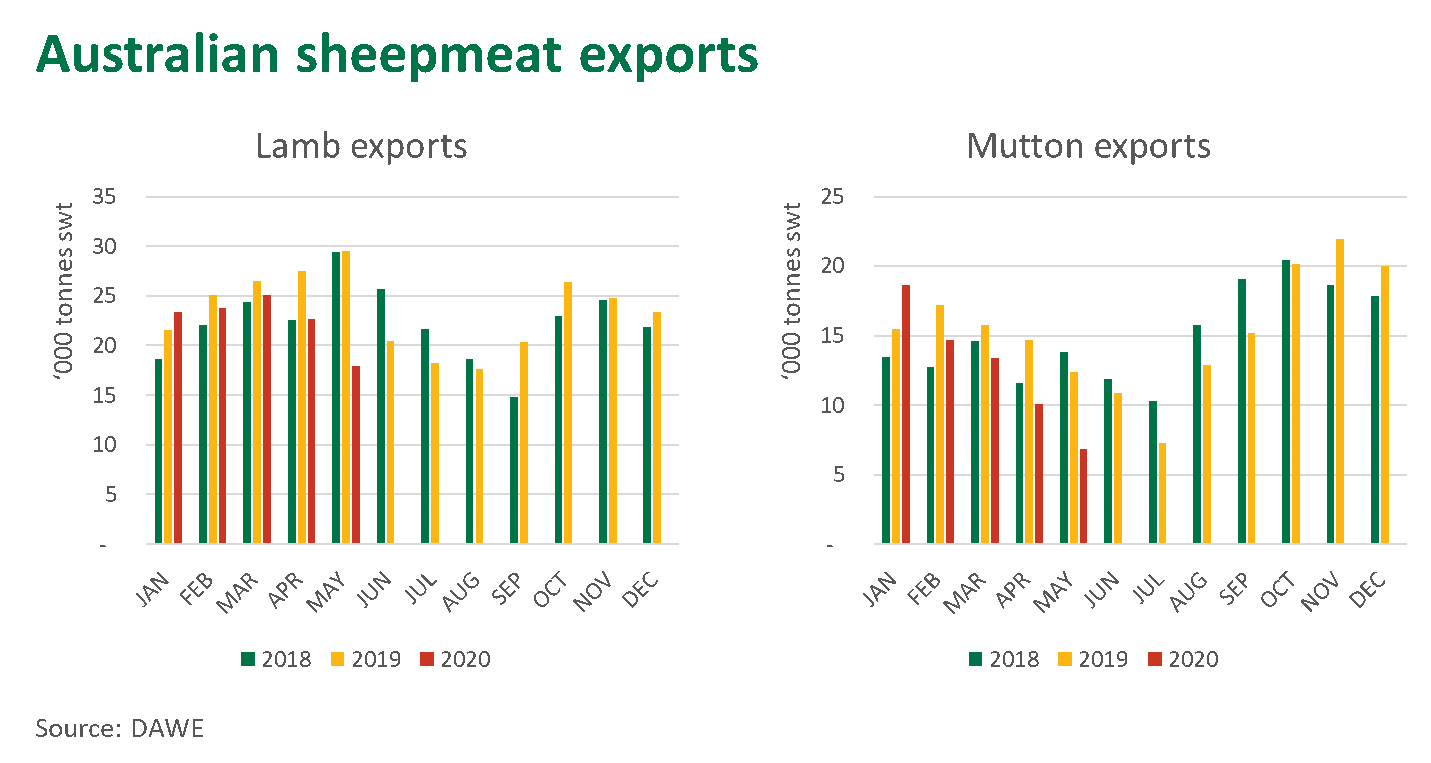 As reported previously, the grounding of flights has significantly disrupted the Middle Eastern lamb carcase trade, which is dominated by product being freighted in the belly of passenger flights to the Arabian Gulf. While the International Freight Trade Mechanism (IFAM) has kept some product hitting the skies, trade into the region has slowed substantially. In addition, myriad issues are undermining sheepmeat demand across the Middle East, from depressed oil revenue to the downturn in tourism and business travel.

Despite this, not all markets in the Arabian Gulf have been affected equally. Qatar Airways has continued to run flights to and from Australia and has maintained a stable supply of sheepmeat. Air freight sheepmeat into Qatar was up 64% year-on-year in April, bolstered by Ramadan moving forward in the year, while year-to-April volumes are up 25% year-on-year.

In contrast, with a greater reliance on oil revenue and tourism, and the grounding of most Etihad and Emirates Australia-bound legs, trade to the UAE has fared less well. Air freight sheepmeat exports to the UAE collapsed 43% in April and the year-to-April volume is back 12% year-on-year.

Detailed air and sea freight export data is not yet available for May, however aggregated data suggests these diverging trends between markets continued into last month.

Sheepmeat demand from Saudi Arabia has also softened. Taking a lot more sea freight frozen mutton destined for banquets and catering, the trade to Saudi Arabia has more reflected the sharp contraction in certain channels and hit to oil income than the grounding of flights.

US and China vying over reduced pool

As highlighted in the recent Steiner Consulting US Lamb Market Update, US lamb production collapsed in April and early-May amid processing plant closures and chain slowdowns due to COVID-19. However, foodservice demand was also depressed, hindering the opportunity for imported lamb to fill any gaps in the market. Unlike other proteins, many consumers in the US are unfamiliar with or have hesitations to cooking lamb at home, creating limited upside for switching foodservice consumers across to retail channels. US reported imports of Australian lamb in late May were suggesting some improvement in demand, in line with many states reopening economies and reviving foodservice, however widespread protests across many cities may dampen this trend in the short-term.

Australian lamb exports to the US were back 33% in May and are tracking 12% lower year-to-date. While mutton shipments to the US started the year very strongly, they have dwindled over the last four months as supply has been squeezed. 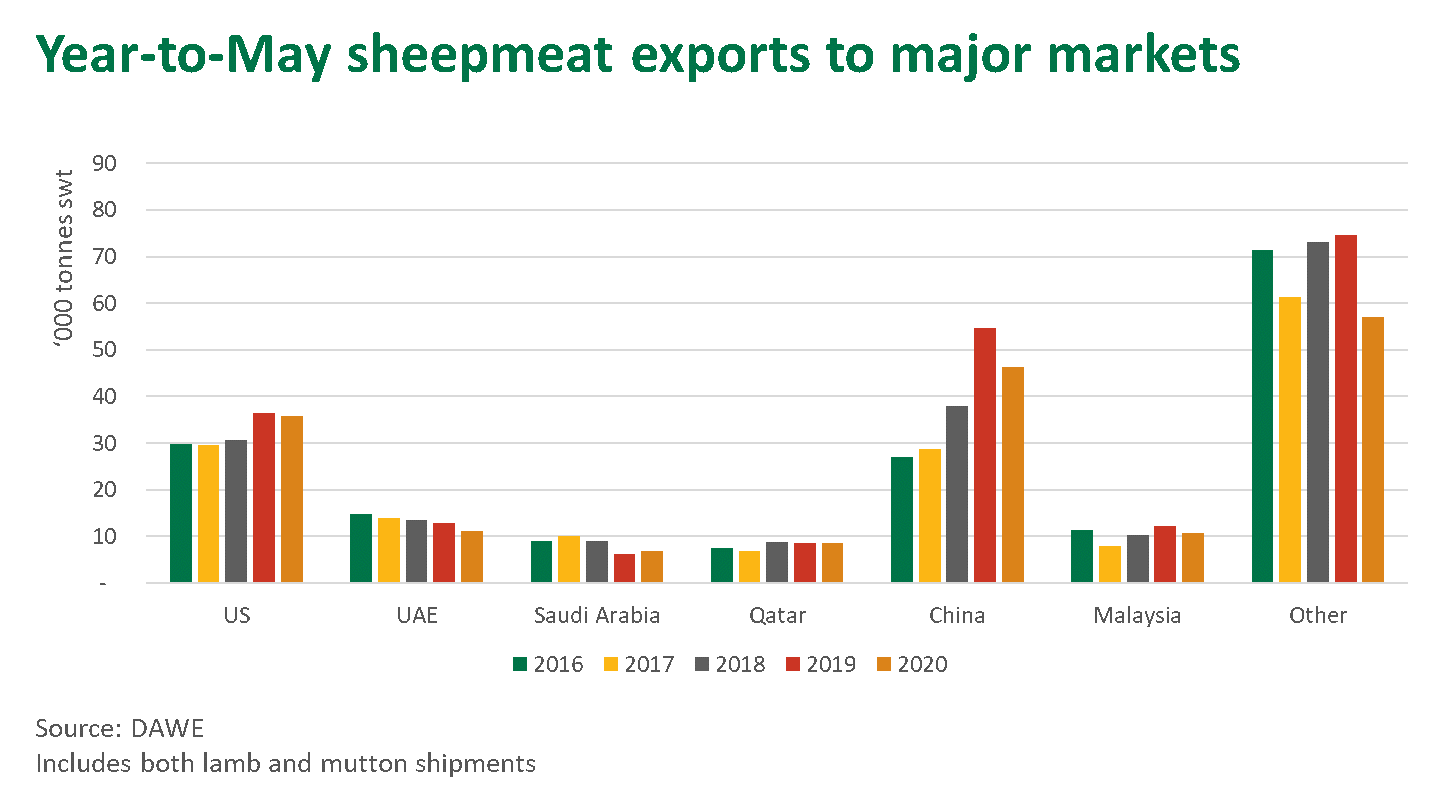 With sheepmeat in China heavily skewed to foodservice channels, particularly ‘hot-pot’, demand from the market will hinge on the continued success of re-opening restaurants and the willingness of consumers to dine-out. In the US, however, Australian lamb is far more evenly spread between foodservice and retail channels, protecting a core part of the trade from changes in dining-out rules.

In the Middle East, the speed at which air-travel resumes in the second half of 2020 will drive particular carcase markets. Fortunately, some markets across the region have recently extended product shelf life, which will facilitate a greater degree of chilled primal sea-freight into some channels in future. In addition, OPEC and Russia agreed over the weekend on oil production cuts, which will bolster oil prices and buttress government revenue across the region while the deal holds. The price of Brent crude is now trading close to a three-month high.

Supply and export volumes over the southern hemisphere winter months will be hard-pressed to increase from current volumes out of Australia or New Zealand. However, while there are glimmers of improvement, the strength of export demand remains the great uncertainty in the current climate.