The outlook for the world economy has continued to be revised lower in recent months, as the realities of COVID-19 have set in. In April, the International Monetary Fund (IMF) revised their forecast for global GDP growth in 2020 to a 3.0% contraction – a stark contrast to the 3.3% growth forecast back in January or the 2.9% estimated for 2019. Other pundits are even more pessimistic on the prospects for global growth in 2020.

GDP on its own doesn’t determine demand for Australian red meat. It does, however, reflect the broader health of economies around the world and correlates with unemployment, consumer confidence and income – factors which do directly impact red meat sales.

So, what is the impact of a 3.0% contraction in the global economy? Some inferences can be drawn from history however the very nature and breadth of the current crisis is unprecedented.

The Global Financial Crisis (GFC) is the most recent example of a global contraction however it was mostly limited to developed economies – notably the US, EU and Japan. During the GFC much of Asia continued to expand, supported by the economic weight and massive stimulus from China. According to the IMF, China’s economy is expected to grow at just 1.2% in 2020, compared to 9.4% in 2009.

In addition, COVID-19 is simultaneously impacting the economy and changing the way people purchase and consume products. Both consumer purchasing power and behaviour will change in ways previous economic downturns have not seen.

The contraction in the world economy from the GFC lasted from Q4 2008 to Q3 2009, but high unemployment and low inflation persisted for a number of years after. Europe was still grappling with a sluggish economy going into the current crisis.

Average Australian beef export prices (deflated and converted to US dollars) declined sharply at the start of 2009 and didn’t return to their pre-crisis trend until the end of 2010, as illustrated below. If export prices had remained on trend over the period of the GFC, and assuming export volume was unaffected, the lost beef export revenue from the economic downturn equates to just over US$1 billion FOB (2015 dollars). That’s comparable to the value of Australian beef exports to Korea.

The price impact from the GFC on sheepmeat was more modest. Average export prices cooled between Q4 2008 and Q2 2009, but the softening of the market pales in significance compared to the strong price acceleration amidst a very wet 2010 and 2011, which sparked a flock rebuild. If export prices had remained on trend over the period of the GFC and assuming export supply was unaffected, the lost sheepmeat export revenue from the economic downturn was just under US$120 million FOB (2015 dollars). That’s roughly the same size as sheepmeat exports to Malaysia, Australia’s fourth most valuable sheepmeat export market in 2019. 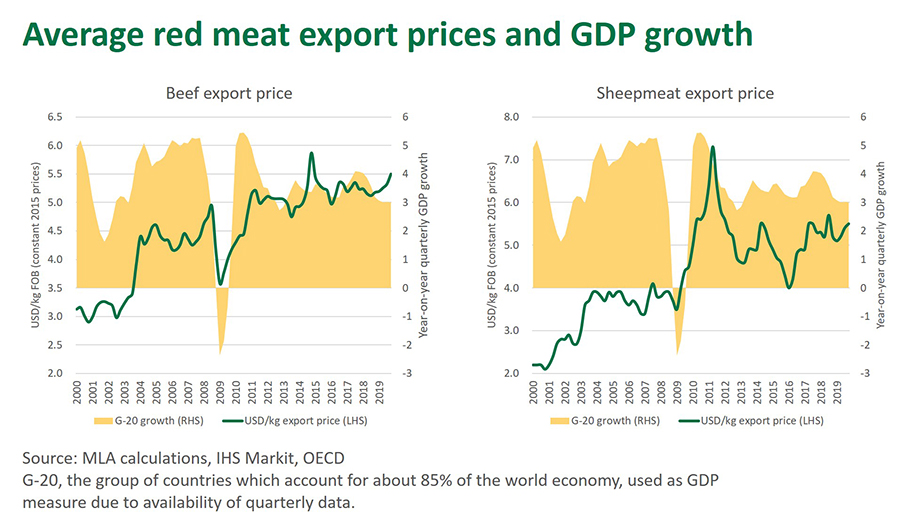 Beef exports were likely more affected by the GFC than sheepmeat due to market mix and the overbearing influence the US has on world beef markets. In 2009, Australia’s top three beef export markets – Japan, the US and Korea, which accounted for 77% of export revenue – all dipped into recession. By contrast, Australia’s sheepmeat export footprint was far more diversified and China was just emerging as a major buyer. In addition, lamb relied on a sizable domestic market, which was largely unaffected over the period of the GFC thanks to the mining boom.

GDP growth important but not the only driver

The figure above illustrates the impact of the GFC on export pricing but it also highlights the influence other market forces – such as the rise in beef prices from 2003 after the US was banned from Japan and Korea due to BSE, or the added support China has leant to beef and sheepmeat markets in recent years. Seasonal conditions, market access changes and currency movements may be equally important factors driving pricing through the uncertainty ahead.

GDP growth isn’t the best, or only, measure of market health. Japan, for instance, has had notoriously sluggish growth for the last decade but it remains a critical beef market for Australia. That said, the impending contraction in key economies around the world will act as a handbrake to export demand. The economic slowdown is expected to be deeper, broader and may last longer that the GFC and, simultaneously, COVID-19 impacting supply chains and consumer behaviour in many ways.