November was another challenging month for Australian red meat exports, with tight supply of livestock impacting exports, particularly beef and mutton. Last month exports of beef were 79,900 tonnes shipped weight (swt), 2% down on October volumes but 23% behind the same month last year, tracking in line with reduced levels of cattle slaughter. Total beef exports for the 2020 year-to-November are 954,000 tonnes swt, 14% down on 2019 levels. 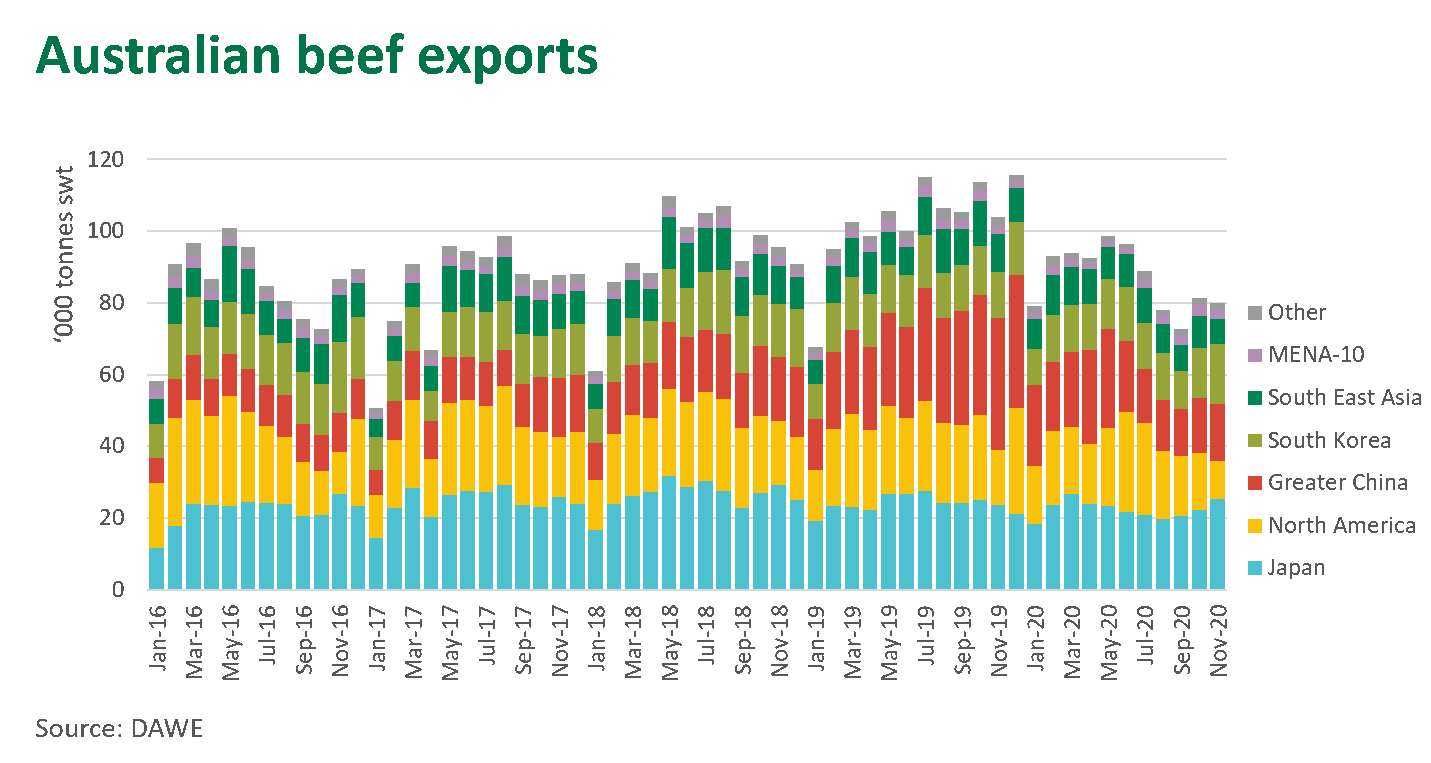 Constrained month for beef exports to the US

November represented the smallest total of Australian beef exported to the US since January 2011 at 9,600 tonnes swt, back 30% on the same month last year. A number of challenges are mounting for the US market, which have contributed to this reduction in exports.

As COVID-19 cases continued to rise, the impacted US processing capacity resulted in a short-term spike in imported beef demand, back in May. Since then, US cattle slaughter has run at near year-ago levels, bolstering beef production and shoring up US self-sufficiency. Meanwhile, US restaurant activity remains subdued due to ongoing lockdown restrictions. A final consideration is that competition within the market is certainly tight. While import volumes from Mexico, Australia and New Zealand dropped away in October, imports from Canada, Nicaragua and Brazil lifted 10%, 20% and 51%, respectively (Brazilian volumes are coming off a lower base).

In November, 25,400 tonnes swt of beef was exported to Japan. Trade to Japan, Australia’s top beef market, has remained steady through the year despite supply and demand challenges. Of note last month was the volume of manufacturing beef sent to Japan, which eclipsed 12,000 tonnes swt. This is impressive, considering the monthly average for the past three years was below 10,000 tonnes swt. For the year-to-November, manufacturing beef exports to Japan were up 4%. Australia is a dominant supplier of beef to hamburger chains and casual dining restaurants in Japan, and while the 2020 pandemic impacted all foodservice businesses, some operators in this segment weathered the challenge comparatively well, supported by their take-out/delivery capabilities.

November was a huge month for exports to South Korea, with beef exports reaching 16,600 tonnes swt, the largest total for South Korea since August 2018. After Japan, South Korea was the next largest destination, accounting for 21% of all Australian beef exports in November, which is unexpected considering the Korean-Australia beef import safeguard was triggered last month. However, a reduction in buyer competition from China (who have been sourcing large volumes of beef from South American competitors) could be a contributing factor for the lift in trade. Additionally, shipping delays have also resulted in a wave of product exported late in October/early November (prior to the safeguard being triggered) being carried over to later in the month. 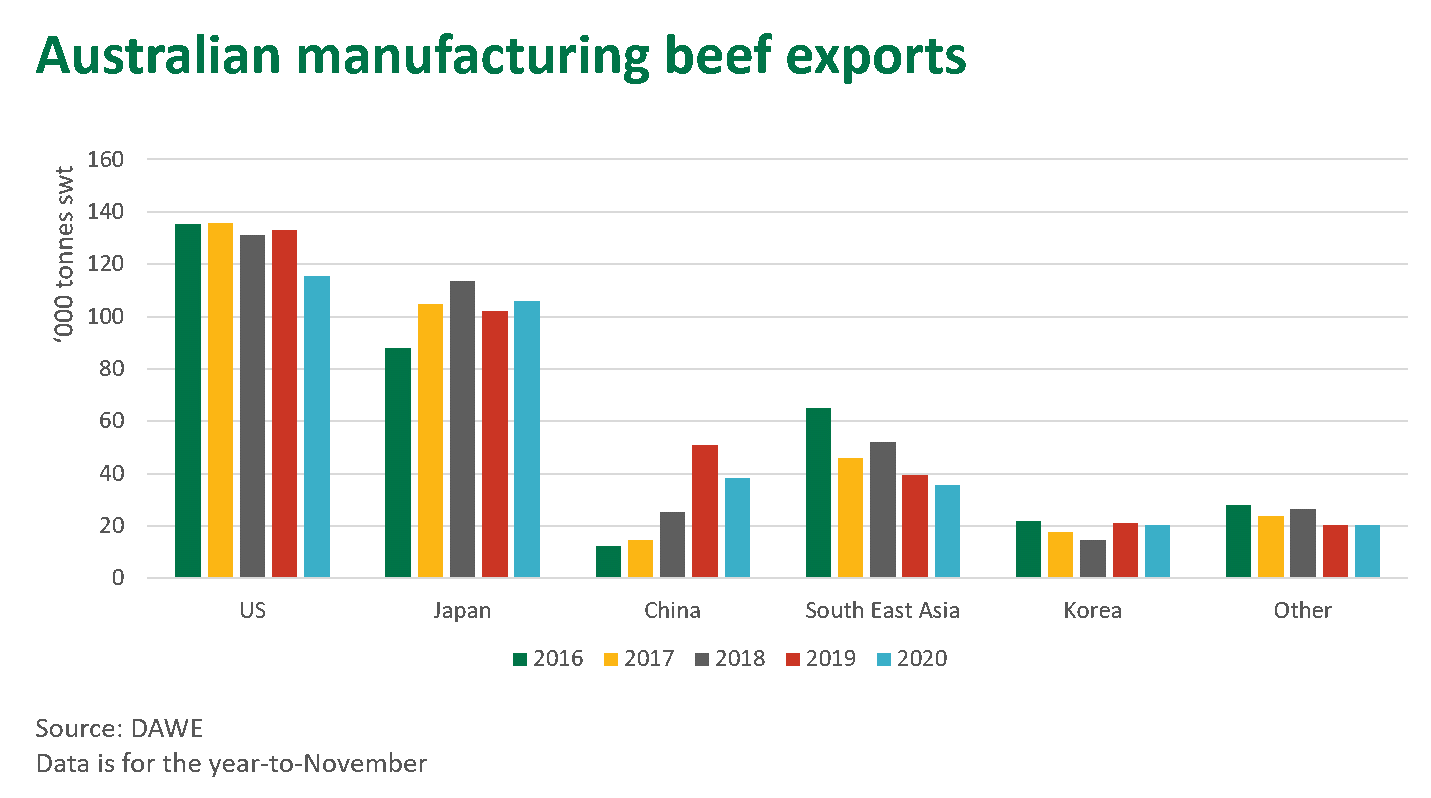 For further detail on the global beef trade environment, refer to the Global Beef Market Monthly Review, provided to MLA by Steiner Consulting.

China remains the largest destination for Australian lamb, however, exports have declined relative to 2019 levels. For the year-to-November, South Korea, the US, Malaysia and Hong Kong are all destinations that have lifted on 2019 levels. Given challenges associated with COVID-19 this year, it is a positive sign that these markets have experienced growth despite all the obstacles throughout the year.

Sheep slaughter has shown some improvement since the typical winter lull, however, it still remains well back on historical levels. Mutton exports in November reached 14,400 tonnes swt, a slight dip on October levels and a 34% decline on the same month last year. With such high levels of sheep turnoff experienced through 2018 and 2019, restricted availability has had a major impact on the availability of mutton to export this year.

China continues to dominate the mutton market – largely accounting for any lifts in mutton availability. However, mutton exports to China are back 34% on 2019 levels, which is one of the more prominent declines across the board. The US, the UK and Qatar are three key markets where mutton export volumes have lifted relative to 2019, albeit only in small volumes.