Strong start for red meat exports, but set to tighten

Typically a slow month, red meat exports in January performed well relative to previous years. While volumes were strong off the back of a huge 2019, the Australian export situation could soon change with domestic supplies set to tighten with recent rainfall, while the relatively uncertain impact of the Coronavirus also looms.

China was again the top market for the month at 21,000 tonnes swt, closely followed by Japan with 18,300 tonnes swt – who regained some lost market share when compared to the back end of 2019. A slowdown in Chinese demand was to be expected as a result of typical seasonal demand following New Year celebrations, however, the spread of coronavirus has injected some level of uncertainty into the market (explored in last week’s article). Imported beef prices into the US have dipped slightly, an outcome of overseas suppliers shifting attention back to former markets following reduced Chinese demand. 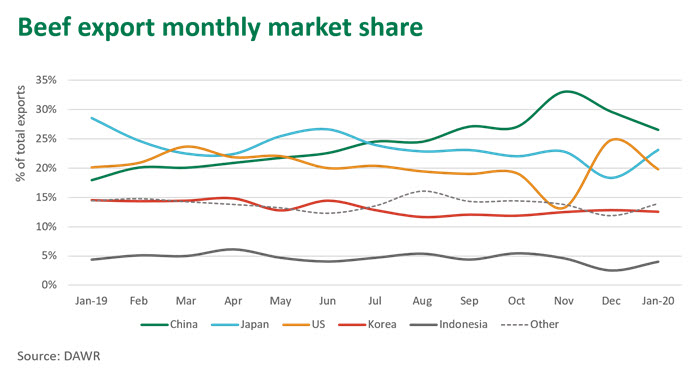 Lamb exports for January reached 23,400 tonnes swt, up 8% on January last year, while mutton exports were 18,600 tonnes swt, up 20% on last year. China (5,300 tonnes swt) remains the top market for lamb, with the US closely behind at 5,100 tonnes swt. Similar to beef, reduced lamb exports to China were an expected seasonal decline, but the potential impact of coronavirus looms. Lamb exports to the US appear to be lifting again after spending the majority of last year trailing China. The US lamb inventory is now at the lowest level on record, which should support import demand as fewer US lambs are marketed and producers look to rebuild flocks.  Additionally, lamb supplies from NZ have been focused on China, widening the opportunity for Australia to capitalise in the US market. 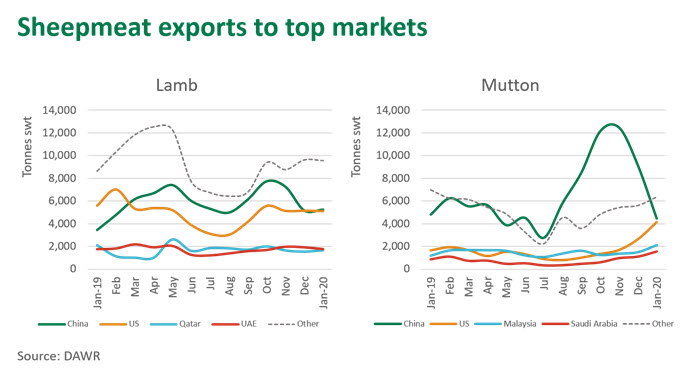 Mutton exports have fluctuated rather dramatically over the past year as supply has surged following drought. Through the fourth quarter of 2019, China became such a dominant destination for Australian mutton that it captured over half of all exports for the period. However, this January saw a huge swing, with exports to the US picking up 57% month on month, just 300 tonnes behind China which fell 51% on December volumes. With the sudden retraction of interest from China, Australian mutton undoubtedly became more accessible - illustrated by a steady uptick in exports to all other destinations. What does Brexit mean for Aussie red meat? A year of challenges for red meat exports