Strong demand from a growing class of affluent consumers and a massive domestic protein deficit due to African Swine Fever (ASF) pushed China to import the largest annual volume of protein through customs in its history in 2019. China imported just under 6 million tonnes swt of combined beef, sheepmeat, poultry, pork and offal, increasing 46% on 2018 and making it the largest imported meat market in the world, without rival. 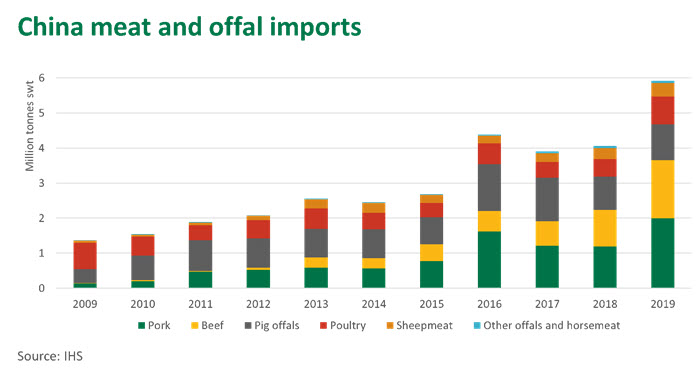 While all species and categories saw increased import volumes, due to differing market access restrictions, domestic supply and demand factors, beef and pork recorded the biggest increases in volume, followed by poultry and sheepmeat.

Despite China’s record meat imports in 2019, several concurrent factors are already disrupting the protein market in China and, hence, there may be some short-lived disruption to Australian red meat exports to China.

The final quarter of 2019 saw the emergence of heightened market volatility, with reports of some importers of South American beef delaying payment, renegotiating and even cancelling contracts prior to port discharge following a spike then contraction in market prices. While red meat imports typically record a seasonal drop during and immediately following the month of the Chinese Lunar New Year, there is potential for an even greater seasonal lull in February and a delayed resumption to increased volumes in March.

While it is too early to estimate the impact of the Novel Coronavirus on global meat markets, several key areas will witness significant disruption and, hence, have an impact on red meat demand, trade and distribution for all suppliers, including Australia. To date, China has been the focal point of potential disruption.

MLA will closely monitor and report how red meat demand and distribution fares in relation to the usual post-Chinese Lunar New Year seasonal ‘dip’, which is expected to be longer due to the government extension of the public holiday period in an attempt to mitigate spread of the virus.

While short-term disruptors present challenges to beef and sheepmeat exports to China, the market fundamentals of a massive meat shortage remain unchanged.

While official reporting of ASF cases in China has slowed in recent weeks, it is unclear how much of this is due to the extended public holiday and disruptions caused by Novel Coronavirus and how much is the success of efforts to control the disease spread. ASF clearly still poses a significant and on-going challenge to China’s pork industry and it will take some time for more effective disease control measures to enable the pig herd to rebuild.

China’s on-going massive protein shortage will likely see further increases in plant approvals for pork and poultry exporting countries that have supply capacity. The most notable market access improvement of late was the US-China Phase 1 Agreement announced last month, providing the framework for a substantial pork, poultry and beef trade to emerge between the two global powers.

The date for the Phase 1 Agreement to enter into force is 14 February 2020, however the Novel Coronavirus may delay some implementation to parts of the agreement.

China’s 2019 all-time record protein import volume has led to increased exposure of many key suppliers to this single market, which carries a certain level of risk. Beef shipments from Argentina and Uruguay are the most dependent on Chine, which China represents 76% and 70%, respectively, of either countries exports. Brazilian beef shipments to China exceed 50% of exports if Hong Kong is included.

Although China became Australia’s top beef export market in 2019, increasing its share of Australian exports from 14% in 2018 to 24% in 2019, Australia is less exposed to China than other key suppliers. Australia has achieved favourable market access conditions to a diverse range of valuable markets, which has been critical for industry’s growth and ability to mitigate trade risk.

In contrast, China has been reducing its dependency on any one supplier by granting more countries access and approving export establishments. By the end of 2019, China was importing beef from 26 countries, compared to just 10 in 2014. Even in the small but emerging high value chilled beef trade, China has increased the number of approved countries to 10 in 2019, up from just one (Australia) in 2015.

Increasing sheepmeat access has been a less urgent strategy for China, as global trade is dominated by Australia and New Zealand and China’s self-sufficiency is much higher. In 2019, China’s domestic production of sheepmeat was estimated to contribute to 93% of consumption, while for beef it is around 69% (Source: GIRA).

While the demand drivers that fuelled unprecedented Chinese meat import growth in 2019 appear set to remain present in 2020, elevated levels of uncertainty stemming from several concurrent disruptors, not just in China but regionally and globally, mean close monitoring of markets and risk management strategies are more important than ever.