Total beef exports have declined for the fourth consecutive month in a row, totalling 73,000 tonnes swt in September. This represents the lowest month of beef exports (excluding January due to processor shutdowns) since April 2017, which was a similar year of herd rebuilding.

Year-to-September beef exports are back 11%. While these figures are subdued, it is important to recognise that 2019 and 2020 are very different years from a supply perspective. 2019 was a particularly exceptional year, with drought induced turn-off resulting in heightened production volumes, which enabled exporters to respond to very high levels of international demand. This year, beef exports will remain subdued, constricted by a smaller herd and tightening slaughter levels, similar to 2015 and 2016, two years which also followed a substantial period of drought. 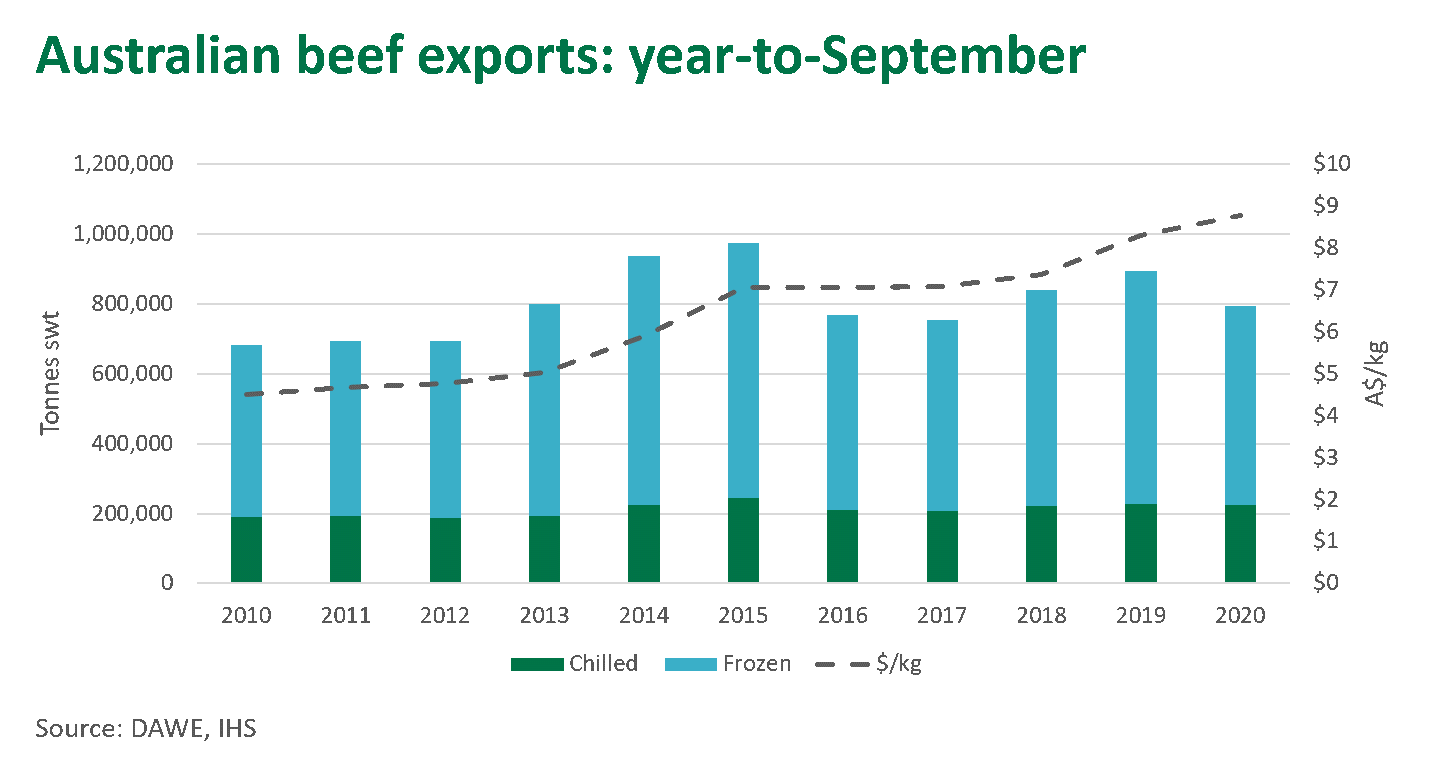 Japan remains the top destination for Australian beef, taking 20,500 tonnes swt in September. Reports indicate that foodservice demand in Japan experienced a low in April, however, has been on a gradual path of recovery since. The pandemic situation in Japan remain fluid, with daily new case numbers still counting several hundred, and consumers showing signs of ‘COVID fatigue’, with some reportedly not adhering to social distancing rules.

Beef export volumes to the US have also retracted over the past few months, down to 16,000 tonnes swt in September. A combination of increased competitor activity and a higher USD-AUD exchange rate will implicate demand for Australian product.

Lamb exports have shown some resurgence after the typical lull associated with winter export volumes, with production levels boosted by an uptick in slaughter through much of September. September lamb exports were 22,000 tonnes swt, marking an improvement of 7% on the same month last year and representing the third consecutive month where lamb exports were above year-ago levels. 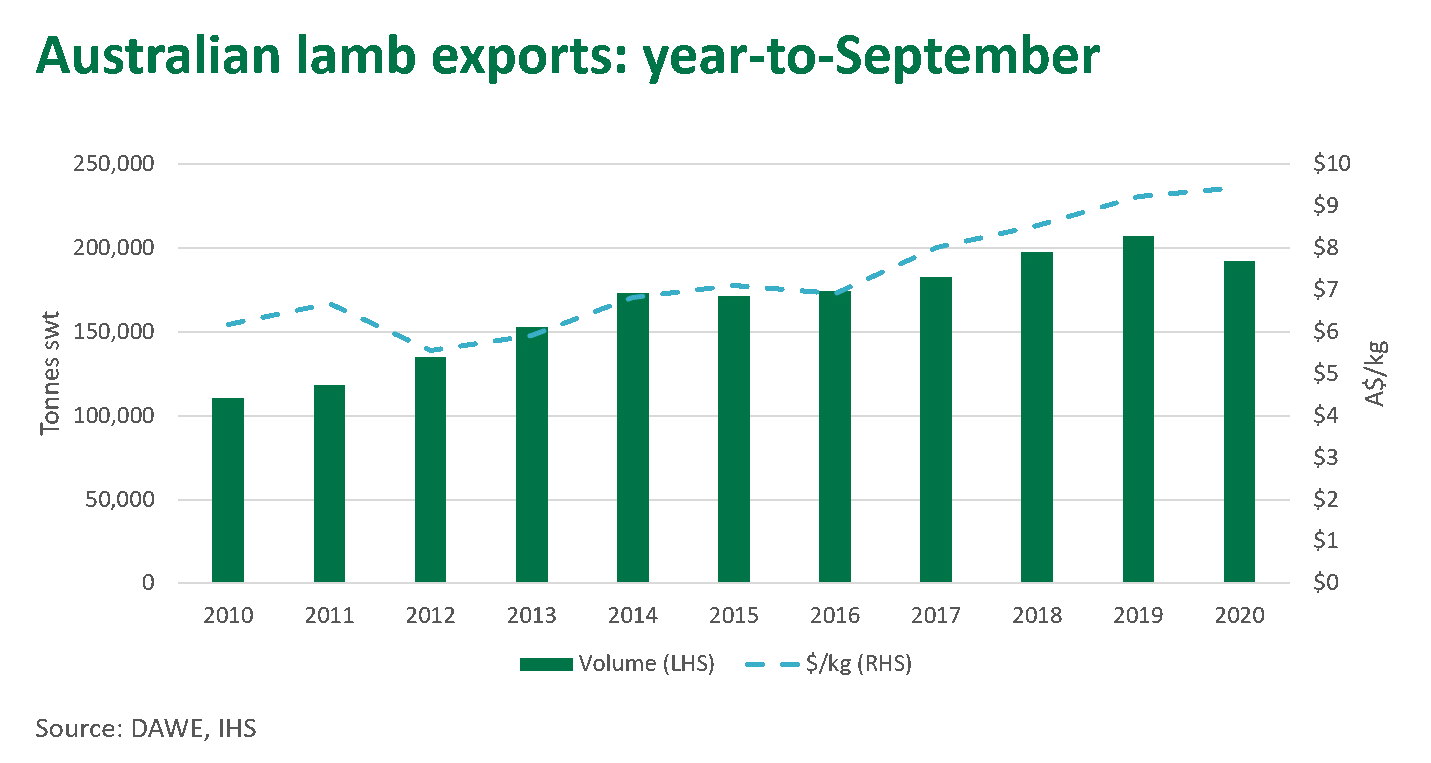 Year-to-September lamb exports are now back 7% on 2019 levels. The US was the top destination again, taking 5,200 tonnes swt, with import demand propped up by firm prices across the US for retail cuts.

Over the past three months, China has slightly pulled back from the lamb market, with September export volume just below 4,500 tonnes swt, a 28% decline on the same month last year. As China’s sheepmeat production ramps up, this may cause import demand for Australian and New Zealand lamb to ease.

In recent months, lamb exports to MENA have lifted back towards typical levels. Following the live export cessation through the Northern Hemisphere summer, combined with some COVID-19 related challenges, Middle Eastern supplies of sheepmeat will likely have depleted. September boxed lamb exports were 4,600 tonnes swt, a significant lift on shipments in May, June and July this year. The average export price of Australian beef ticked upwards in August, and is now A$8.40/kg. A high of A$9.30/kg was reached in February, as demand across markets peaked, buoyed by ASF. Since then, the impact of COVID-19 has underpinned a decline in export prices, however, values remain above year-ago levels. 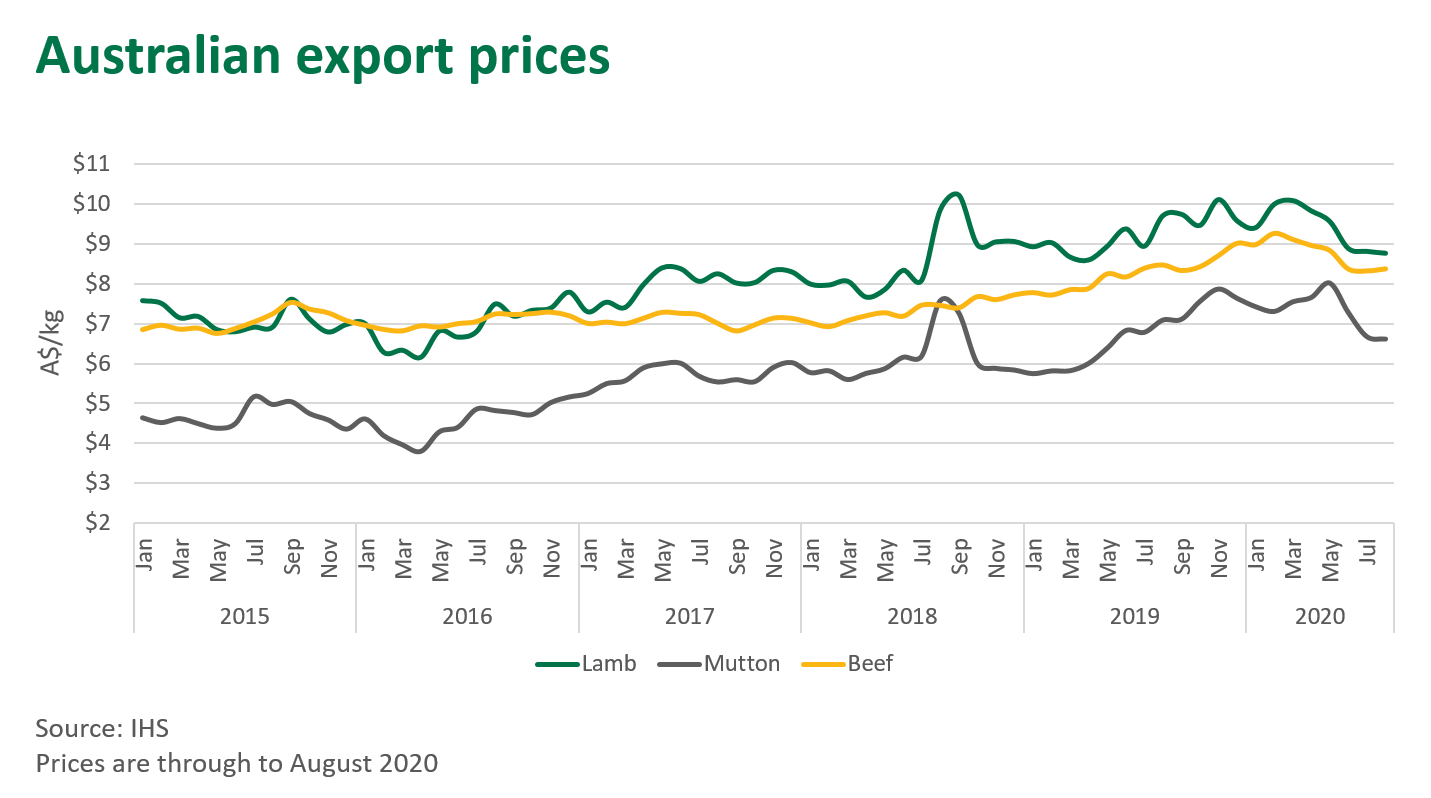 Strong export prices continue to support the overall value of Australian beef exports, currently at A$6.8 billion for the year-to-August. This represents no change relative to 2019, despite a volume difference of almost 70,000 tonnes between the two years.

A similar trend is evident for both lamb and mutton, however, year-to-August sheepmeat export values are A$2.4 billion, back 2% on 2019.

While export volumes across red meat categories remain subdued relative to recent years, it is important to consider the challenges that currently face the industry in regards to supply. For current export values to remain on par with 2019 levels, under such supply constraints, is a testament to the value and resilience of the Australian supply chain, as well as the enduring demand for quality Australian red meat from global consumers.