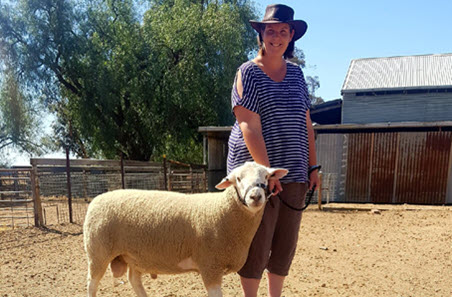 Dung beetles are tipped to help the red meat industry become more productive and carbon neutral by 2030 – and they’re already part of the sustainability recipe in the Noble family’s diverse livestock enterprise.

This high productivity is enabled by healthy soils. The Nobles aim to run 1.5 cows and five sheep/ha while maintaining year-round groundcover supported by good soil management.

Carly and Darren blend age-old farming techniques and a willingness to think outside the square in their biodynamic, organic system.

On any given day, the couple can be found spreading homemade compost on pastures, monitoring manure for beetle activity and rotating livestock through ‘biozones’ (grazing areas of barley, grass and natural woodlands to promote natural foraging patterns). Carly uses soil tests and photos to document soil condition, a program she started in 2006 when only 60% of their first farm had groundcover and topsoil was just 5cm deep.

“We targeted paddocks with lime, manure and compost, have increased groundcover to 90% of the farm and built topsoil to 30cm,” she said.

The compost is created from livestock and chook manure and shredded straw. Crops are turned into green manure with slashing, spreading and scarifying.

Earth banks have been built to control overland flow and avoid soil erosion, and Carly and Darren have planted hawthorn hedges, an old English farming practice to create shelterbelts for livestock and biodiversity benefits.

“We have 25–30 natural species of pasture or conservation flora, as well as legume crops such as chicory, peas and beans, which provides access to a diverse diet," she said.

This ‘smorgasbord’ also features saltbush and by-products such as brewer’s mash and seaweed meal.

The Noble's livestock aren’t the only ones benefiting from dietary diversity.

When Carly first noticed dung beetles on their farms in 2002, she recorded four different species and an average of five to seven holes and 21 beetles per pile, in around 75% of manure.

Each hole led to a 40cm deep tunnel, made by the beetles to carry organic matter down (thus storing carbon in the soil) and bring deeper soil up to aerate the soil and free up compacted areas.

Carly has now established a system to ‘farm’ dung beetles to promote their activity across the farm and tap into the benefits of improved plant growth and carbon storage in soils.

She uses harrows to break-up soil, moves 2.5kg piles of fresh manure to these ploughed areas, then transfers dung beetles to these plots to begin the process of building underground filtration of soil.

Carly monitors manure early in the morning and in the evening, when dung beetles are most active, and has seen beetle behaviour change based on the season and livestock diet.

“When cattle and sheep grazed hay and vetch over summer, there were five to six holes in each manure pile, whereas in April and May, when animals also received seaweed and brewer’s mash, activity increased to seven to eight holes per manure paddy,” she said.

“In our most recent monitoring, we have dung beetles active in 82% of manure piles and there are 11–12 larvae holes per paddy,” Carly said.

Research that digs into dung beetles

MLA is leading a large and unique collaborative research project to rear existing and introduce two new strains of dung beetles across southern Australia and WA.

This Rural R&D for Profit project will investigate how dung beetles can improve profitability and productivity for primary producers by improving soil health, reducing the spread of flies, pests and diseases, increase pasture health, reducing nutrient run-off into waterways and sequestering carbon into soils.