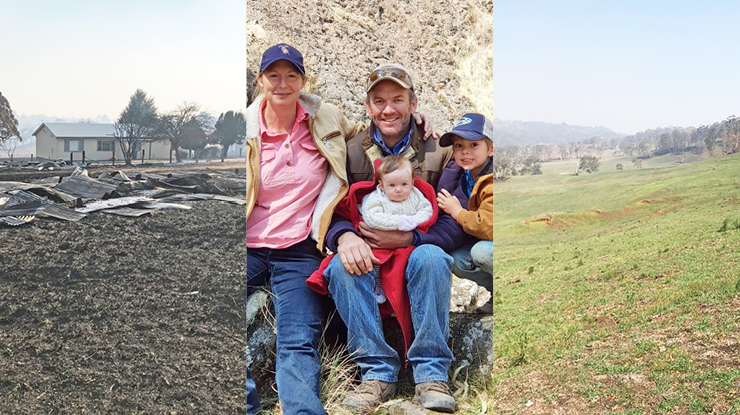 (L-R): Burnt sheds at Wilmot Cattle Co in September 2019; the Austin family - Trish and Stuart Austin with their children Harry and Poppy; four months and some rain later, the valley has started to recover.

The 2019–20 bushfire season was early, far-reaching and it hit hard.

On 6 September 2019, a fire flared up in the Guy Fawkes National Park on Wilmot’s western boundary.

Fanned by strong winds and fuelled by unseasonably dry pastures (Stuart recorded just 437mm last year, in a region which typically receives 1,200mm), the fire quickly swept across Wilmot and into neighbouring properties. 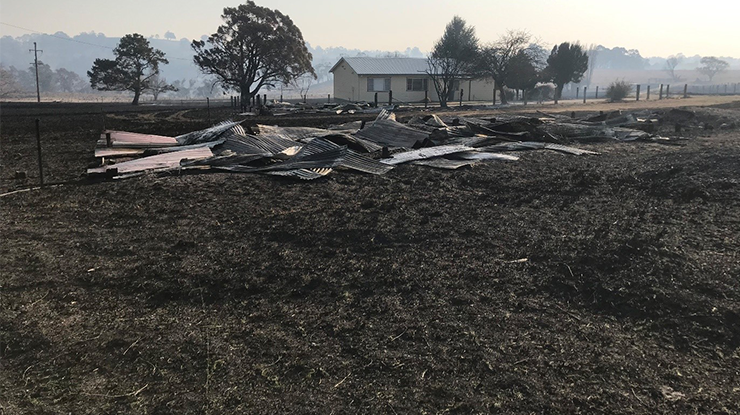 A staff house on Wilmot miraculously survived the fire, but the majority of infrastructure on the property couldn't be saved.

Although Stuart had experienced grass fires during his time in the NT, it wasn’t a scenario he expected at Wilmot, where he and his wife Trish had, only the day before, notched up three years of management.

The holistic approach to pasture management at Wilmot, centred on an intensive, rotational grazing system proved a blessing and a curse.

With just two mobs of cattle which were used to being moved, it was easy to shift them into the yards for safety and none were lost.

However, the property had a high fuel-load and was highly developed with around 100 paddocks, so there was significant damage to fencing and water infrastructure, and 2,500ha was burnt.

Losing half their available feed placed immediate pressure on how to manage stock.

“Before the fire, we were going through a very dry run, but we knew it was dry and we had plans in place,” Stuart said.

“We knew our sale program, we knew what feed we had available, we knew how many head we could handle, we were in control.

“The fire took that control completely away and knocked me for six.”

Four months on from the fire, with re-fencing completed and 152mm of rain (well down on their expected 100mm/month but enough to re-establish some feed), Stuart has had a chance to catch his breath and reflect on the experience.

With many friends and colleagues also affected by fires, especially in the Upper Murray where he grew up, here he shares his experience with bushfire recovery:

Stuart said his head was spinning for the first couple days after the fire. He spent this time driving around the property to get his head around the damage, so he could develop an effective plan.

“We got a map of the property, marked out what was burned, wrote down our priorities and then set weekly goals. This was especially important for fencing, as it made a huge task much less daunting.”

The decision was made to sell any cattle that didn’t have sufficient feed.

“The initial response was to sell our trade cattle as they’re more liquid, but when I sat back and had a clear think, we decided to offload our breeders instead.”

The rational was simple: the young trade cattle had much lower feed requirements, so we turn-over more and generate more cashflow.

“In our situation, it didn’t make sense to hold on to cattle which would take longer to improve in value. We needed to re-join, carry them through to weaning and preg-test before they went up a class in value.”

Burnt paddocks were completely rested through spring and summer and Stuart has seen pastures start to regenerate, without any inputs.

“Every little bit of rain helped and the summer-dominant species such as fescue, cocksfoot, phalaris and kikuyu have recovered well.”

In early January, Stuart started to give these paddocks a very light graze in order to stimulate further growth on the back of recent rainfall. He doesn’t expect they’ll be back to full production until next spring.

“Water is as essential as feed, so my advice is to try to restore your water system as soon as you can if it’s been damaged.”

Wilmot’s water monitoring technology even had a role to play in the rebuild.

“We run Farmbot tank monitors and it alerted us to issues, such as where tank levels were dropping because pipes had melted,” Stuart said.

“We used this technology to prioritise repairs and monitor tanks refilling as we repaired leaks, greatly reducing the time it would have taken to physically check each tank.”

While Stuart did take the opportunity to make some minor realignments during re-fencing, he said the main lesson learned was to reassess infrastructure materials.

“In this area, split wood posts are commonplace, so by default we ordered the same. In hindsight, I should have taken a bit more time to think about exactly what we needed, so in future we will probably use all steel posts and end assemblies when replacing fences,” he said.

“The offers of support we received after the fire were really overwhelming,” Stuart said.

“It’s the nature of our industry to not take ‘charity’, but I can’t stress enough the importance of accepting some help.

“It takes many hands to rebuild, so think about what you’ll need and draw on who is most readily willing and able to contribute. It might be BlazeAid, it might be friends, it might be people in your networks who understand your business and what you need to get back on track.”

Six weeks after the fire, Stuart and Trish hosted a district party to bring their community together to talk, reflect and support each other.

“Our community is that much stronger for having this disaster,” he said. 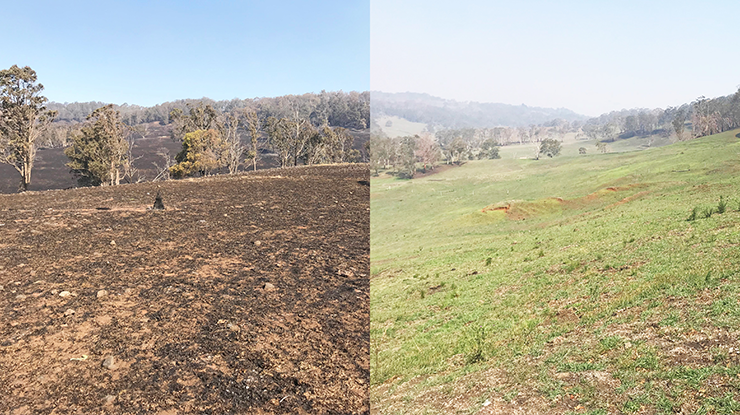 Left: After the fire on Wilmot, looking up Johns Valley
Right: Four months and some rain later, looking down into the same valley.

Stuart shares the key take-aways from his bushfire recovery experience in the hope it will help others who have gone through similar devastation.

1. Take some time. Don’t expect to achieve anything for a few days, beyond the immediate needs of livestock. Your mind and body need time and space to process what’s happened.

2. Make a plan and prioritise:

3. Get some rest. If you’re thinking about getting one more thing done before going home to your family, ask yourself if it matters if it’s done tonight or if it can wait until morning. The love and support of your family is what you need most right now, and so do they from you.

4. Keep an eye out for your mates, now more than ever. Keep talking. Stop for a yarn whenever you see them. Check in on them.