Five things to know about the new NVDs 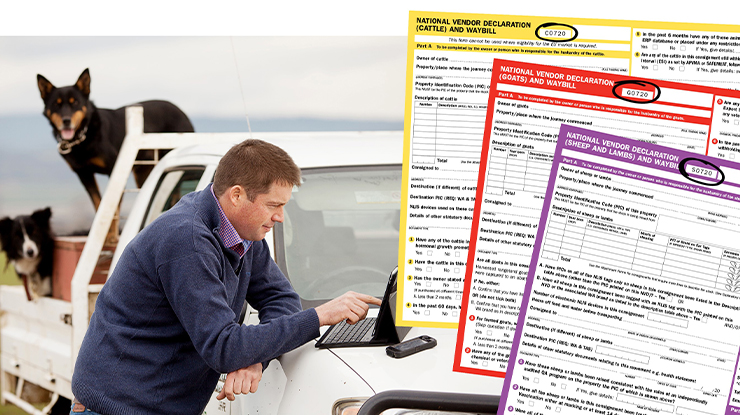 Producers will benefit from changes to the National Vendor Declaration (NVD) this year, with an easier, more efficient and cost‑effective system.

The NVD communicates the food safety and treatment status of every animal every time it moves along the value chain – between properties, to saleyards, or to processors.

The main changes to the NVD will streamline how supply chain stakeholders interact with Australia’s red meat integrity system, and include:

Here’s what the changes mean to your business:

1. Why are updated versions of the NVD being released and what are the main changes?

The updated versions are the result of a review of NVD versions by SAFEMEAT in 2019.

The main changes to NVDs for all species include removal of Part C (Agent’s Declaration), which is rarely used by industry and is not required for any legislative reason, and the inclusion of a ‘destination PIC’ section, which is a legislative requirement in WA and Tasmania, and will be optional for other states.

Sheep NVDs include a new section for the number of electronic devices included in the consignment to accommodate the mandatory use of electronic NLIS in Victoria and its increasing use in other states.

2. When will updated NVDs be available?

Updated versions of the NVD for all species are available now, identified by version number 0720.

As part of the MLA Accelerated Adoption Initiative announced in November 2019, there is no cost for NVD books until 30 June 2021.

LPA accredited producers, feedlots and value chain stakeholders who use the eNVD platform can automatically access the updated versions.

Current versions of NVDs for all species (cattle, EU cattle, sheep and lambs, goats and bobby calves) will be accepted until 31 December 2020.

4. Why use the LPA eNVD system?

The mobile‑friendly, LPA eNVD is the digital alternative to paper‑based NVDs. It is fast, easy and more accurate than paper forms.

The eNVD is not just an NVD – it’s a system for completing all consignment paperwork digitally, including livestock assurance and health declarations.

5. When and why is the eDEC being decommissioned?

As the new LPA eNVD does everything an eDEC does, and in a more user‑friendly way, the eDEC system is being decommissioned.

Any eDEC users who have eDEC tokens on their account can use them up until 31 December 2020, when the eDEC will be decommissioned.

After 31 December 2020, users who need or want to continue using an electronic version can use the eNVD.

For simple step-by-step instructions on how to use the eNVD platform, watch this video.

To find out how to complete an LPA NVD, watch this video.

New NVD books can be ordered through the LPA service centre, using LPA log in details.

For instructions on how to complete the new version (0720) NVDs, visit the ISC website.