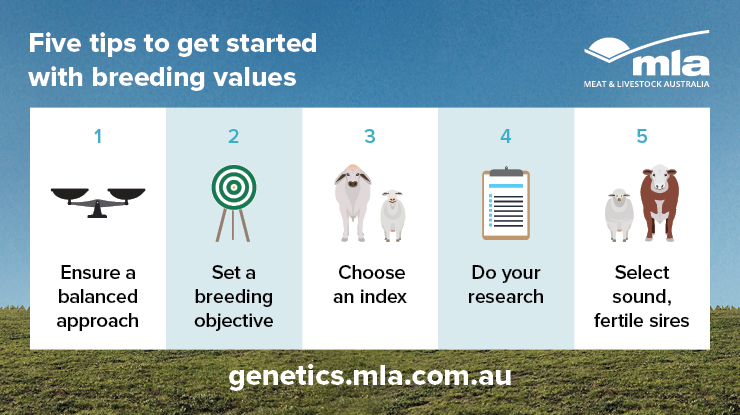 If you’re not aggressively accelerating the performance of your herd or flock by using better breeding values, you’re fighting a losing battle.

That’s the message from Dr Rob Banks, Director of the Animal Genetics and Breeding Unit at the University of New England.

“It’s a message no producer can afford to ignore,” Rob said.

“Constant genetic improvement goes a long way to offsetting the cost–price squeeze, and complements the productivity gains available through pasture and animal management.”

An investment that pays for itself

Many producers are tapping into the benefits of better genetics by buying bulls or rams from breeders using BREEDPLAN, LAMBPLAN or MERINOSELECT. Producers who pursue genetic progress find themselves accelerating the performance of their herds and flocks in such a way that their initial investment more than pays for itself.

“On average, the current rate of genetic progress in British breeds is just over A$4 per cow joined per year,” he said.

Rob said for northern Australia the rate of genetic progress for the past five years has been $1 per cow joined per year.

“The lower number in the north reflects the fact that fertility has been an important component of the index but, to date, few bull‑breeding herds have had good data on it,” he said.

“However, the research and industry data for fertility now becoming available underpins genomic Estimated Breeding Values, and we’re seeing early signs of a lift in the rate of genetic progress. There’s lots of upside potential.”

But there are still some commercial producers who aren’t harnessing the power of good genetic traits – even when they’re widely available and identified as essential to sustained profitability.

Rob said the southern beef industry has pioneered the adoption of genetic information in Australia, with more than 70% of southern bulls offered for sale backed by breeding value data.

In the north, the numbers aren’t so impressive, with around 15% of sale bulls accompanied by breeding values data.

“This probably reflects the challenges of collecting accurate pedigree and date of birth in extensive northern breeding enterprises, coupled with a general perception that genetics data doesn’t have as much relevance in the environmental conditions of the north,” said Rob.

“That perception is wrong.

“DNA tools are helping overcome the recording challenge. Genetics data relating to fertility in the north is now becoming available – and it reveals massive genetic ranges in lifetime weaning rate and profitability in northern breeds.”

“Quite a bit of artificial insemination is being used in Merinos by enterprises large enough to breed their own rams,” he said.

“Producers are increasingly using semen from breeders in the MERINOSELECT program, so the impact at a flock level means about 50% of rams used across industry have some genetic information available.”

“Many commercial producers of temperate cattle, prime lamb and Merino breeds have got on board with breeding values over the last 10–20 years,” Rob said.

“They’ve seen the value in not just relying on visually assessing potential sires, they’ve also leaned on breeding values to allow them to see into the animal’s genetic makeup and make more informed decisions.”

“More and more producers are seeing that sires with better breeding values produce better progeny, and that means a better performing herd or flock.”

But, there’s still room for improvement.

“Just because sires are increasingly sold with breeding values doesn’t mean commercial producers are necessarily using that information. And those who use breeding values can always strive to find sires with better breeding values,” Rob said.