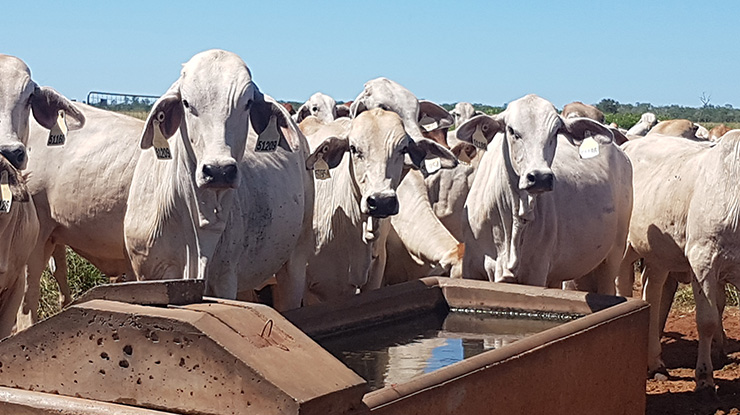 Brahman heifers in the NT herd. Credit: SBTS and TBTS

Improved fertility of northern beef herds is on the horizon, with more research to improve the accuracy of estimated breeding values (EBVs) for female reproductive traits.

The second stage of the MLA‑supported Repronomics project is now underway, building on the first phase, which concluded in 2019.

The initial Repronomics project delivered numerous production benefits including an 18% increase in the accuracy of the days to calving EBV and increased rates of genetic progress for Brahman, Santa Gertrudis and Droughtmaster cattle.

The project is led by Dr David Johnston of the Animal Genetics and Breeding Unit and aims to expand the foundation for increased effectiveness of genomic selection in tropical beef breeds.

The project includes research herds in the NT, Queensland and NSW to improve EBV accuracy for region specific breeds and enhance fertility.

One component of the research is a herd that has been specially bred over 30 years and is currently run on three NT research farms: Douglas Daly, Beatrice Hill and Victoria River.

NT Department of Industry, Tourism and Trade Livestock Officer, Gretel Bailey‑Preston, manages these NT herds and oversees the research on them.

She said the unique adaptation of these cattle is critical to delivering benefits for NT producers from Repronomics II.

“The herds we run here have been selected for fertility and production outcomes in the NT environment, so they’re tropically adapted and suit this region,” Gretel said.

While the NT contribution to Repronomics I only focused on Brahmans, the second phase of research has been extended to include the tropical composite herd.

The tropical composite herd brings together the tropical adaptability of Bos indicus and the fertility of Bos Taurus breeds like Charolais, Hereford and Shorthorn, as well as hybrid vigour from combining several breeds.

“There’s very limited data on cattle like these and their genomics,” Gretel said.

“Collecting data from Brahmans and composites will help to improve overall fertility in northern herds through establishing more accurate selection for fertility in these climates and developing across‑breed EBVs.”

The project involves intensive data collection, including frequent ovarian scans of heifers to determine when they start cycling and when they return to cycling after their first calf.

Other data collected from the herds includes calving dates, mating dates and bull soundness testing, which all contribute to fertility EBVs.

Cow and calf weights, body condition score, hip height, fat depth and eye muscle area are also being recorded to improve accuracy of other EBVs and maximise the potential benefits to producers from the project.