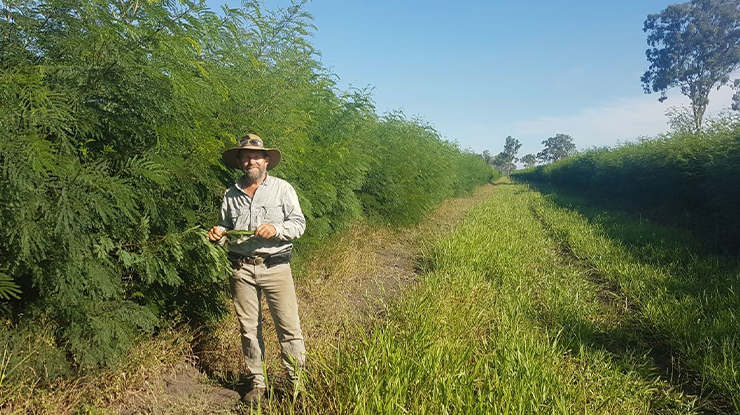 Bruce Mayne, pictured with leucaena being grazed in the Fairview trial. Image: The Leucaena Network

Could leucaena deliver a four-fold increase in production beneﬁts by increasing weight gain and carrying capacity?

An MLA-supported weight gain trial for steers grazing the forage legume, Redlands leucaena, has set out to answer this question and early results are positive.

The trial is being hosted by Redlands leucaena growers and seed producers, Bruce and Lucinda Mayne, at their property ‘Fairview’ in central Queensland.

The trial began in June 2020, with 80 weaner steers from several local properties grazing a 40ha paddock of Redlands leucaena for a year. The steers’ weights are recorded every eight weeks.

Bruce said the ﬁrst weigh-in recorded average weight gains of 0.28kg/day for the ﬁrst eight weeks – greater than the 0.1kg daily weight gain of steers on a control block of native grasses, despite the steers being slow to take to the leucaena.

On this region’s native grasses, producers could expect cattle to gain 120kg/year, but those involved in this trial hope to achieve 250kg/head/year on leucaena.

“You can also run twice as many cattle on the leucaena, so there’s potentially a four‑fold benefit to planting it if you have the right country.

“We’re hoping that’s something this trial can prove.”

The trial will conclude in June 2021, when cattle are sold at the CQLX 2021 Special Weaner and Feeder Sale.

A grower’s guide to leucaena

With more than 30 years’ experience growing leucaena in central Queensland, Bruce knows the importance of management to ensure the investment pays off.

“Leucaena is expensive to establish and in its early growing stages can be labour-intensive to manage,” he said.

Bruce has some tried and tested strategies to successfully establish and manage leucaena.

“With leucaena, it’s imperative that you have well-drained soil and a weed-free seedbed. Some of our country here wasn’t well drained so we’ve built banks in these areas to grow the leucaena on,” Bruce said.

“You also need good levels of phosphorous and sulphur. With phosphorous, 25+ parts per million (ppm) is required to grow leucaena over any length of time.”

Bruce said it’s critical to plant leucaena very shallow – no deeper than 30mm – as seed can get lost if it’s planted too deep.

The fragile nature of young leucaena plants means they need to be carefully managed from germination until they’re about 1.5m high.

After that, you can start grazing t and planting improved pastures around it for greater paddock productivity.”

Although leucaena brings many beneﬁts, there’s a responsibility when growing it to ensure it doesn’t become a weed.

“If you see a bush come up outside the paddock, you need to spray it out immediately,” Bruce said.

If producers have the equipment, they can cut leucaena down to keep it from seeding, maintain a manageable height for grazing and reduce shading out grasses below. No summer holiday for sub-clover management