North‑west Queensland producer Colin Burnett knows the risks of running a grazing business in extreme conditions all too well.

Shortly after he used his 2018 Nuffield Scholarship to study business sustainability in varying climate and market forces, Colin was facing a natural disaster of his own. 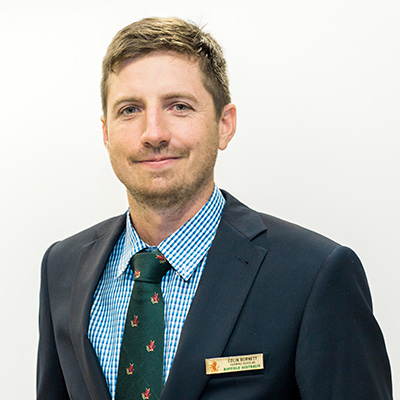 In just 11 days from 2 February 2019, ‘Lara Downs’ – which Colin runs with his brother Adam near Julia Creek, Queensland – received 963mm, nearly double their annual rainfall in one event.

This flood came on the back of a better than average season in 2018.

As soon as the torrential rain eased, the Burnetts put a drone up to check the damage.

“It was pretty bad, a quarter of the property was under floodwaters,” Colin said.

They lost 20% of their herd and, with 18km of the Flinders River running through the property, there was extensive infrastructure damage, including 45km of fencing and erosion to 15km of roads and gullies across the property.

The Burnetts took a measured response to recovery, looking for opportunities to rebuild a more robust business to manage future risk.

After conducting aerial fodder drops and property inspections to estimate losses, their next priority was moving cattle out of flooded areas and into paddocks less susceptible to flooding, in case more water came down the system.

In March and April of 2019, after waters subsided, they turned their attention to re-fencing. The first stage was 27km of new boundary fencing, followed by repairing or replacing internal fencing.

“We took the opportunity to realign fences to reduce future risk and maximise return on investment,” Colin said.

“We shifted fences away from flood areas and removed three of the five fences crossing the river.”

He credits support from the community and organisations such as BlazeAid as vital for ‘boots on the ground’ help with fencing and mustering immediately after the flood.

The fencing program pushed the usual April­–May muster back to June, when the Burnetts could get a real handle on stock losses and plan future business requirements.

They sourced good quality young cattle out of dry areas along the eastern seaboard but, with limited rain since the flood and limited pasture response, they couldn’t fully restock, and by October 2019 were only running at about two-thirds of capacity.

Colin drew on financial planning resources offered by the Queensland Department of Agriculture and Fisheries including cashflow management and restocking strategies.

He accessed the $75,000 Queensland Government grant for initial recovery activities, including fodder and fencing, and was approved for a $400,000 grant to continue stocking.

By the end of 2019, Colin finally had a chance to catch his breath and take a critical look at his business.

He has taken any opportunity to generate cash flow, including trading cattle, baling and selling pasture hay, and contracting their earthmoving equipment.

Ongoing activities include controlling weeds such as noogoora burr and prickly acacia brought down in the floodwaters, and working with Southern Gulf Natural Resources Management to address erosion along the river.

“For me, sustainability means a prosperous agricultural industry across northern Australia, which leads to the whole community’s viability, but risk is inherent and should be part of normal management.

“In particular, climate risk management is one of the critical factors to business sustainability – it’s a must.”