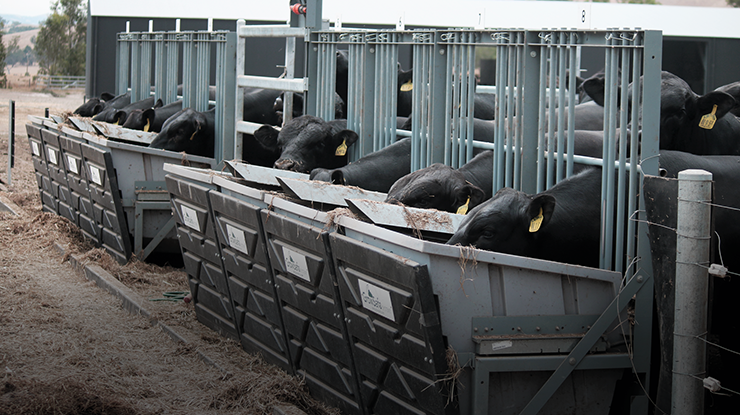 Victorian producer Harry Lawson is a fan of numbers and what they tell him about his business.

“We’ve chosen to invest in technologies and systems which we see as beneﬁcial to us in a management sense, and also to our clients from a genetics perspective,” Harry said.

One such tool is a data capture, management and decisions support program called GrowSafe.

The Lawsons have used GrowSafe since 2018 to accurately measure feed intake and average daily gain.

Harry said he’s ‘revved up’ about the ability of technology to deliver multiple weight readings throughout the day to create a more accurate picture of cattle performance.

“It gives us more accurate weights in a timely manner without having to run the pens through the yards each time we need to weigh them,” he said.

“If you run 40 bulls into the yards, some might have drunk 40–50 litres of water or eaten 20kg of feed just before they came in, which means you get a great variation in weight at any one time.”

Harry said the main reason he’s invested in this technology is to develop a system which not only accurately ranks animals for feed efficiency but also links to a global database, as the Canadian-developed program is used by research facilities.

“Most of the Angus sires which have feed efficiency data don’t meet our other multi-trait criteria, such as calving ease, mature cow weight and carcase traits,” he said.

The Lawsons have established their own bull testing and research and development centre to draw on GrowSafe’s software and analytics, to feed information into genetics research as well as provide valuable management information.

Harry sees a place for this technology on-farm, with potential future use in conjunction with emerging technologies such as virtual fencing.

He’s also interested in the practical applications of technologies which allow producers to manage large amounts of data.

For example, technology which collects real-time information about livestock can identify health issues.

“The system picks up bulls with reduced intake and/or lower average daily gain before clinical signs of ill‑health appear, so that way you can treat animals before the issue.

“Last year, we had a bull which lost 2kg a day for more than a week – this showed up in the data. When we looked at him, he had pink eye so we could treat it and get him back on track.”

“Instead of just getting a weaning weight at the end of the year, with this system we’ll be able to ﬁne-tune management throughout the year.

“I want to know what the minimum amount of grain is to meet my targets. If mixed grain is $450/tonne, then every kilogram variant is 45c/head/day, which is signiﬁcant when feeding large numbers of cattle.

“I can vary my ration, feed more hay or silage, and I can ﬁnd my answers accurately at least fortnightly.”