Not all sheepmeat fat is equal: how to strike the balance

Where fat is laid down in the live animal, either within the muscle (intramuscular fat) or around it (subcutaneous fat), plays vastly different roles when it comes to eating quality and carcase yield.

Intramuscular fat (IMF%) is the measure of the chemical fat percentage in the loin muscle of lamb, where the visible component is known as marbling. MSA consumer research shows that IMF% positively impacts eating quality.

FAT (fat depth) is the measure of subcutaneous fat and has implications for lean meat yield (LMY%). FAT is an important production factor for finishing lambs and ewe maintenance. Adequate fat coverage is critical for even carcase chilling and avoiding cold shortening. MSA requires a minimum fat score of 2, which is equivalent to a GR site measurement of 6mm or greater.

Genetic selection pressure for high yielding carcases and carcase weight has led to an increase in LMY% and shear force (SF5), which are closely correlated traits.

“These traits have a negative relationship with intramuscular fat, so balancing both for an optimum outcome is critical,” Laura said.

“Like wool, where micron and fleece weight are antagonistically correlated, using Australian Sheep Breeding Values (ASBVs) to guide genetic decisions enables producers to move both traits in a desirable direction; leading to fleeces that are both finer and heavier.

“Similarly, by selecting ASBVs for eating quality and yield, it’s possible to produce lamb carcases that are higher yielding, without compromising on eating quality, over time.”

Although both IMF% and FAT measure fat deposits in the carcase, they are genetically different traits, which means only selecting for FAT will have little influence on actual IMF%.

“Not all fat is deposited in the same amounts or rates, so we need to utilise targeted genetic selection to get more fat to lay down within the muscle,” Laura said.

“The most effective way to select for IMF is to avoid relying on correlated traits like FAT but rather selecting on IMF itself.

“IMF has high to moderate heritability and a negative correlation with shear force, so not only does IMF increase juiciness and flavour, it also improves tenderness.”

“Align your breeding objectives with your production system and target market, and know what your limiting factor is, for example, knowing if your lamb carcases are adequately meeting fat specs for coverage.”

Good nutrition and finishing are critical in defining sheepmeat eating quality in the period leading up to slaughter.

The long period of care and genetic gains can be undone in the two weeks prior to slaughter with poor nutrition and handling.

“Animals that are losing weight will draw down on fat reserves and muscle condition for maintenance requirements, however the muscle’s connective tissue fibres will remain unchanged, leading to a potential increase in meat toughness.” Laura said.

“It is important that sheep are kept on a rising plane of nutrition and are gaining weight before slaughter.

“Finishing to at least a fat score of 2 will ensure adequate fat coverage of the carcase and minimise the risk of cold-shortening and poor eating quality."

To view your compliance to MSA sheepmeat pathways, visit mymsa.com.au

IMF% (intramuscular fat) is the measure of the chemical fat percentage in the loin muscle of a lamb with the visible component often referred to as marbling.

FAT depth is a measure of the depth of subcutaneous fat measured at the C site at either the post-weaning age stage (PFAT) or the yearling age stage (YFAT). The ASBV is reported at different age stages.

LMY% (Lean Meat Yield) is the weight of lean meat tissue (excluding bone and fat) in a carcase, divided by the total weight of the carcase and it is generally expressed as a percentage (LMY%).

SF5 (Shear Force) is the measure of the force required to slice a cooked sample of loin.

GR site is located 110mm from the midline of the carcase along the lateral surface of the 12th rib, where fat is measured.

Cold shortening occurs when the carcase’s temperature declines at a faster rate than its pH leading to tougher meat. 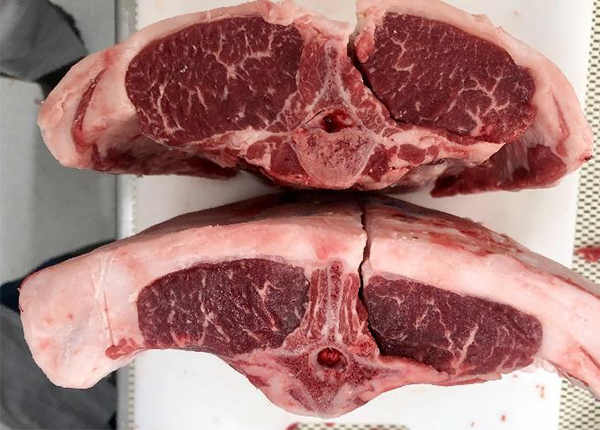 In the picture above, the top loin is an example of balance between IMF% and LMY%. In the bottom loin, although IMF is present, there is an undesirable amount (too much) of subcutaneous fat, impacting yield. 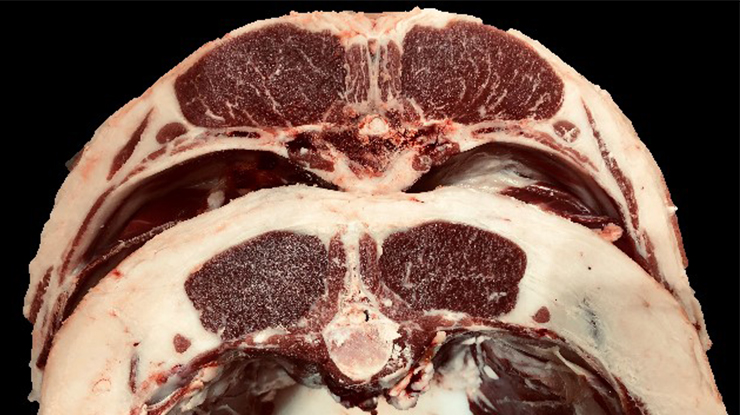 The bottom loin in the above image is an example of too much subcutaneous fat and less IMF and LMY%.