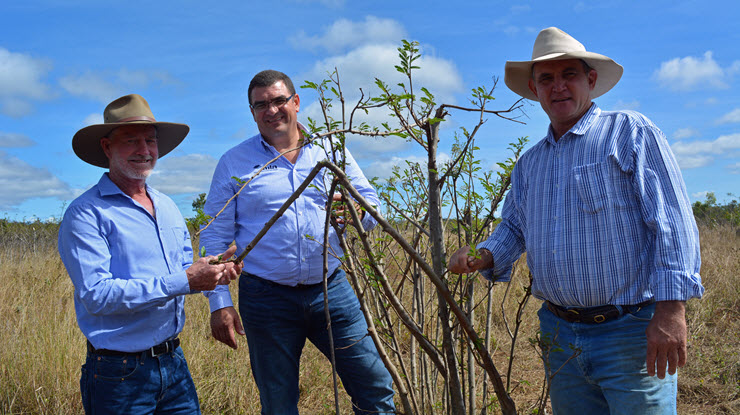 The opportunity to open up large areas for leucaena-based grazing systems in the north’s high rainfall zones is now here, with the commercial release of a psyllid-resistant variety.

After almost 15 years in the making, Redlands leucaena was launched in May at ‘Pinnarendi Station’, Mount Surprise, Queensland – the site of a large-scale trial comparing the new variety to the conventional Wondergraze variety.

Cattle grazing Redlands here have demonstrated an average daily gain of 0.69kg – no different to those grazing the psyllid-susceptible Wondergraze. That live weight gain is double what would be expected from animals grazing native pasture only, in the same environment. Redlands has proven both palatable and free from attack by psyllids.

Bred by researchers at the University of Queensland and developed with funding from MLA, Redlands was described as a game changer by MLA Managing Director Jason Strong, who performed the official launch.

Of the $7 million invested in leucaena research and development across 26 projects to date, using both Donor Company funds and levies, almost 12% has been dedicated to the development and assessment of psyllid-resistance leucaena.

“It’ll also lift the potential for better rangeland management by reducing stocking rate pressure on native pastures and contribute to targets for a carbon neutral beef industry by 2030. Leucaena has already been shown to reduce methane emissions intensity by up to 20% in research conducted by the National Livestock Methane Project, managed by MLA, from 2010–15.

For producers like Peter and Lorna Langtree, ‘Wyvuri’ at Bramston Beach, who attended the launch, Redlands’ potential is enormous.

The Langtrees run 600 Droughtmaster breeders on black sand and peat swamp country with low-protein pastures, turning off weaners that are sent west for fattening.

“We’d like to bring our herd back to 400 head and fatten the weaners at home to retain profit, but we need better feed to do that,” Peter said.

“Leucaena hasn’t been an option to date due to psyllids. If I can get my weaners from 250kg to 350kg at home, that’s feedlot entry weight. The availability of Redlands now is very exciting for us.”

They planted 240ha of leucaena 10 years ago which was largely destroyed by psyllids, so they’ve been keenly watching the development of a psyllid-resistant variety.

As part of the MLA Producer Innovation Fast-Track program with The Leucaena Network, Brett and Theresa planted 70ha of Redlands using a precision Norseman leucaena planter early last year. Overall establishment success was 70% and cattle were put in early in May for initial grazing.

“It’s a no brainer – the results on leucaena’s ability to boost productivity are clear,” Brett said.

“We believe Redlands is the pathway to turning off our steers and heifers 6–12 months earlier. It’s all about weight-for-age in northern beef.

“You want to own these cattle for the least amount of time, but it’s also about getting yourself into a situation where you have some resilience when the harder times come.”

Northern Queensland breeders Tom and Christine Saunders have recorded close to double the weight gains in weaners on leucaena compared to native pastures.

The couple run 1,000 Droughtmaster-Brahman breeders on ‘Whitewater Station’ at Mount Surprise, which is predominantly black spear and Indian couch. They planted 40ha of Wondergraze in 2016 on well-draining, high phosphorous and low sulphur red basalt soil. Good planting conditions and follow-up rain meant there was an establishment success rate of 75%.

Grazing began in the 2017 dry season with a high stocking rate. Early results are showing weaners on leucaena had an average daily gain of 0.48kg/day against weaners on native pastures with an average daily gain of 0.006kg. Weaners put on leucaena at 220kg came out after 300 days at 400kg, which amounted to close to double the property’s typical weight gains, Tom said.

Stocking rates on leucaena were 1:3, compared to 1:6 on native grasses. The leucaena on Whitewater was planted in timbered country in rows 10m apart, with the diet of cattle estimated to be 30% leucaena.

“We did get some psyllid affect, where we lost production in parts for up to two months,” Tom said.

“So we’ll try some Redlands to see what advantage that will bring.”

Good management will be key to the success of leucaena in northern grazing systems, according to The Leucaena Network. Executive officer Bron Christensen said leucaena should only be planted if the intention is to manage it, including taking on the responsibility of controlling leucaena that establishes outside the planted area on your property.

The full Code of Practice is available at leucaena.net.