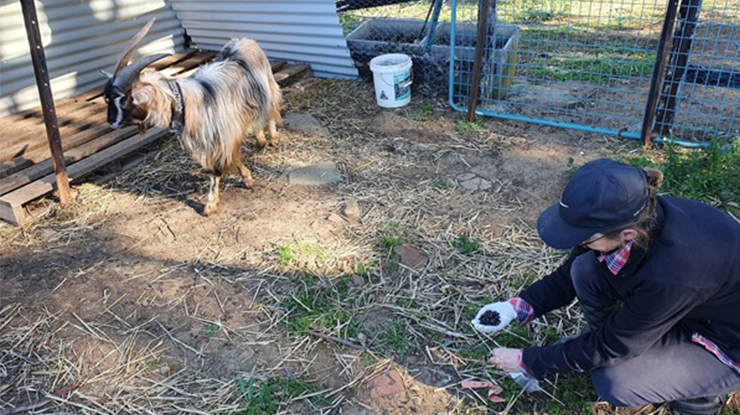 Goat dung sampling on one of the goat farms during the five-week validation study.

Goat producers can undertake rapid on-farm worm egg count testing without having to send dung samples away to laboratories, a study of new diagnostic technology has found.

Goat producers can undertake rapid and accurate on-farm worm egg count testing without having to send dung samples away to laboratories, a study of new diagnostic technology has found.

Funded by Meat & Livestock Australia (MLA), the validation study tested the use of a novel device for worm egg counting known as FECPAKG2, which uses a microscopic camera and a web-based platform for producers to connect to trained technicians, analysis and reporting.

The FECPAKG2 testing method is available in Australia for use by goat producers themselves, or alternatively in veterinary clinics or rural stores that service goat farms.

Validation studies for FECPAKG2 have been conducted on sheep, cattle, alpacas and horses but none previously on goats.

This study compared results of worm egg count testing in goats using FECPAKG2 with those using another method, Mini-FLOTAC, on individual and pooled worm egg counts over five weeks across nine mobs on six farms in New South Wales.

Mini-FLOTAC involves examining worm eggs under a microscope and counting them and requires dung samples to be sent to a laboratory for testing.

“A common theme across the Australian goat industry is the difficulty of worm control, partly due to the goat’s differing behaviour and metabolism from other grazing herbivores and the lack of registered anthelmintic products, or drugs for parasite control, for this species,” Dr Playford said.

“This results in poor goat welfare and productivity as well as potential violation of residue limits of anthelmintics in goat meat samples.

“Worm control decisions may be based on physical examination or objective testing. Rapid testing enables goat producers to make informed decisions about parasite management without delay and treat goats before they are at risk of death or reduced production.”

The results of repeated worm egg counting on dung samples from goats over the five-week study showed that, despite unfamiliarity with FECPAKG2 in the early part of the trial by participating producers and other operators, a very high correlation between the methods was observed after three weeks.

Worm egg excretion by all mobs of goats was high during the five-week trial. Mean worm egg counts across all mobs ranged from 623 eggs per gram (epg) in week four, to 1408 epg in week one. Individual counts ranged from zero epg to 9940 epg.

A range of worm genera was observed, with Haemonchus, Teladorsagia, Trichostrongylus and Chabertia observed in larval cultures and Nematodirus eggs observed in worm egg counts.

Results of the pooled samples across the nine mobs were very similar to the mean of the individual counts, for both methods, with a trend towards higher correlation for the FECPAKG2 method.

Dr Playford said the results mean that goat producers can use pooled counts to save time and money on worm egg count testing, unless individual counts are required for anthelmintic resistance testing or for management reasons.

“Sensitivity of the FECPAKG2 unit is 35 eggs per gram, which is appropriate for Australian goat herds, which typically have worm egg counts over 300 eggs per gram,” Dr Playford said.

“The level of zero counts for FECPAKG2 was higher than Mini-FLOTAC, due to Mini-FLOTAC’s sensitivity of 10 epg in this trial. The counts using Mini-FLOTAC were slightly higher than those using FECPAKG2 in each of the five weeks, due to the higher sensitivity. However, the difference was not significant in week four.”

Dr Playford said adoption of FECPAKG2 for both routine monitoring of goat worm burdens and for testing the efficacy of drenches will lead to improved worm control in goats.

“This will, in turn, improve productivity and reduce the risk of violations of residues in goat meat or unacceptable animal welfare outcomes that threaten the sustainability of the Australian goat industry,” Dr Playford said.

“One key advantage is that testing can be done at the point of care on-farm or at a nearby service provider without the need for sending dung samples through the mail to an accredited laboratory, or risking inaccurate results being done by an unaccredited provider.

“Another is that feedback on preparation and image capture can be given immediately to the operator and images of each test are kept on record for auditing.