Adult cattle slaughter in 2019 lifted 8% on 2018 levels, to 8.5 million head - the 6th highest on record. For the last six months of the year adult cattle slaughter tracked well above the five-year average, as conditions deteriorated and cattle were destocked, supporting processor throughput.

Lamb slaughter declined 5% year-on-year to 21.6 million head in 2019, the lowest slaughter recorded since 2012. This is largely due to the contraction of the breeding flock and lower marking rates, following five consecutive years of lamb slaughter sitting above 22 million head. Despite a drop in slaughter average lamb carcase weights lifted 4% to 23.3 kg/head, supported by southern and central regions of Victoria that received average to above-average rainfall over the wet season and the growing prevalence of supplementary feeding and lot feeding lambs. Albeit, this was not enough to offset the decline in total lamb production which eased 2% to 503,000 tonnes cwt. Sheep slaughter saw a modest decline of 2% year-on-year to 9.3 million head, albeit on the back of elevated sheep slaughter in 2018. Average sheep carcase weights, lifted 3% to 24.3 kg/head, largely due to elevated numbers being supplementary fed throughout the year. As a result, mutton production increased in 2019 to 228,000 tonnes cwt, despite reduced slaughter. 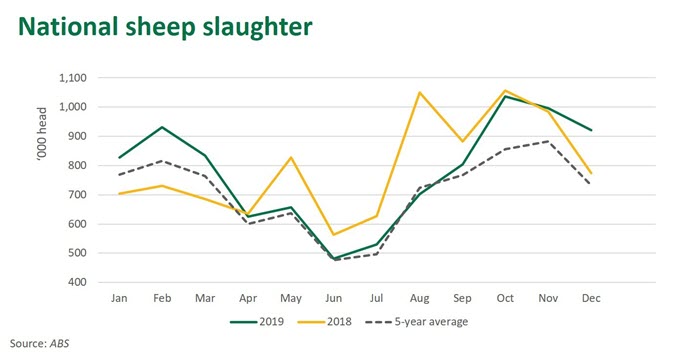