The results of the latest ALFA/MLA feedlot survey reported a 12% decline in the number of cattle on feed compared to the December quarter, to 1,087,594 head. Widespread rainfall earlier in the year supported restocker intentions and created heightened competition in the lot feeding sector. The prevalence of COVID-19 and the impact on foodservice demand further compounded the decline in cattle on feed numbers in the March quarter.

Western Australia and Victoria numbers increased by 6% and 4% respectively from the previous quarter and cattle on feed in South Australia remained stable. However, these gains were offset by a significant decline in Queensland and New South Wales, back 16% and 13% respectively. As a result, national feedlot utilisation fell by 12% from the December 2019 quarter to 78%. Despite a decline in feedlot utilisation, accredited feedlot capacity climbed to a record high, increasing 1% to 1,397,470 head, reinforcing the long-term confidence in the grainfed production system.

Grainfed turnoff set a new record in the March quarter at 863,403 head, an increase of 21% from the previous quarter. During the quarter, grainfed turnoff accounted for a record 45% of total adult cattle slaughter, as grassfed turnoff subsided on the back of improved domestic conditions. 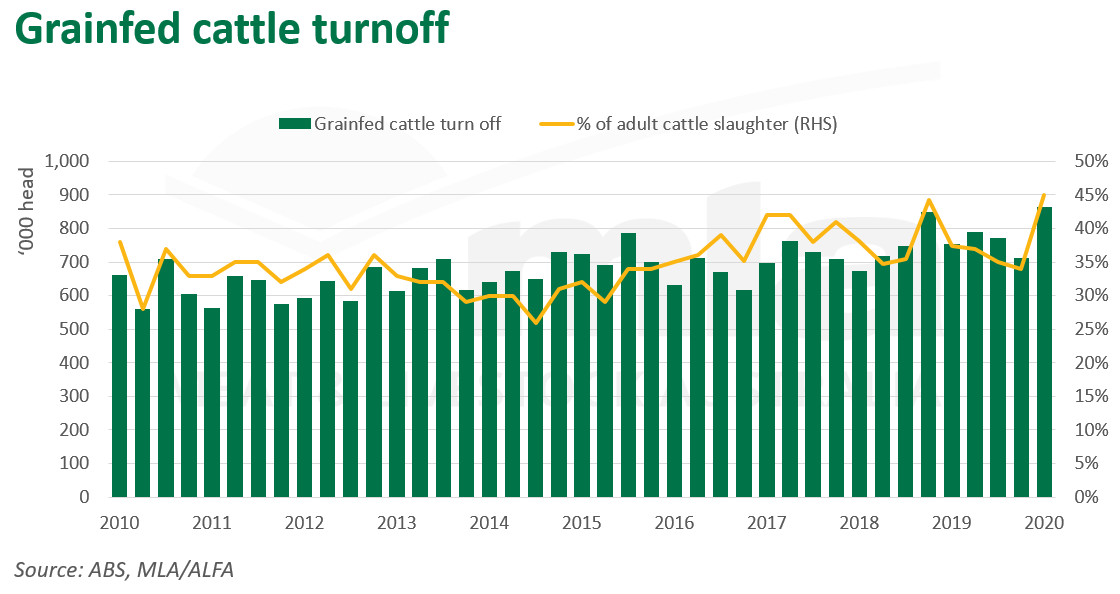 The full extent of the impact of COVID-19 on cattle on feed numbers will not be reflected until June survey results are published. Long-fed programs, in particular, have come under extreme pressure, as high-end foodservice outlets largely remained closed throughout April and May and demand for high-value loin cuts all but disappeared. For the lot feeding sector, balancing the risk of placing cattle on feed and determining when demand will sufficiently pick up will be a challenge. Given the current pressures faced in the US (see US capacity cuts hitting beef exports) and the potential for a shortage of fed cattle, it could present opportunities for Australia in key grainfed markets, especially as the northern hemisphere summer approaches and restrictions are eased -  albeit the price of domestic feeder cattle will also be a determining factor.

Critically, at a domestic level grassfed production will come under far greater pressure this year, as adult cattle slaughter is forecast to approach its lowest levels since the mid-90s, at a time when feedlot numbers remain within a historically high band.