Looking back at big industry announcements 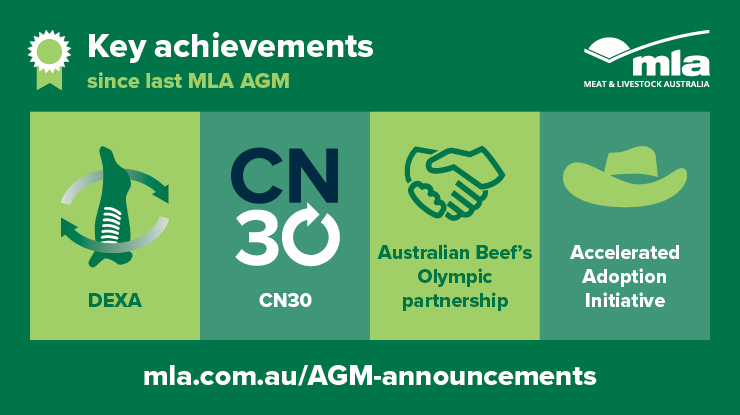 With the 2020 MLA Annual General Meeting (AGM) underway today, we look back at the big industry announcements from previous AGMs and provide an update on their progress.

DEXA technology allows processors to accurately measure the bone, fat and meat composition in a carcase, and where applicable drive automation.

The announcement came in response to the Australian Competition and Consumer Commission’s (ACCC) interim report into the beef and cattle market which recommended competitiveness could be improved with objective carcase measurement.

The introduction of DEXA can pave the way for the objective measurement of lean meat yield, enable development of improved value based trading models and industry-wide productivity gains through processing automation, genetic improvement and data-based on-farm decision making.

MLA has progressed the installation of DEXA units at several early adopter beef and lamb processing plants across Australia. To date, five lamb units and two beef units have been either installed or under construction, and MLA has capacity to fast-track a further nine DEXA units over the coming years.

MLA’s involvement in fast-tracking these units will help to ensure that all processors involved must provide lean meat yield to the last seller of livestock. A key reason why MLA works in this space is to provide a smooth, transparent flow of meaningful carcase feedback data back to producers which can then inform on-farm decision making.

In 2017, MLA announced the Australian red meat and livestock industry’s ambitious target to be Carbon Neutral by 2030 (CN30).

The target means that by 2030, Australian beef, lamb and goat production, including lot feeding and meat processing, will make no net release of greenhouse gas (GHG) emissions into the atmosphere.

MLA has recently launched the CN30 Roadmap, which details priority areas of work to deliver outputs which are required for industry to achieve CN30, including practical advice for producers on what they can do now and in the coming years.

Research trials are underway involving novel feeds and supplements with the potential to reduce enteric methane emissions, and the development of more cost-effective soil carbon measurement technology continues so that producers will be able to verify improvements in soil carbon storage over time.

A CN30 hub is available on the MLA website which contains the CN30 Roadmap, carbon accounting resources and relevant supporting materials.

This was followed-up in early 2019 with the announcement of a partnership with Paralympics Australia (PA).

While the global COVID-19 pandemic has seen the Tokyo Games postponed to 2021, one of the intended partnership activities MLA successfully delivered this year was a brand-new module of its popular online Virtual Classroom schools’ program.

Presented by Australian Beef, this new module aptly named ‘Be Your Greatest’ was hosted over August and September with the delivery of eight classroom sessions.

The program achieved a record-setting attendance of more than 3,000 students, close to a 20% increase on participation numbers when compared to the virtual classroom program held the term prior.

Each interactive session featured one of MLA’s Olympic and Paralympic Beef Ambassadors sharing their story of greatness - with an emphasis on health, well-being and beef’s nutritional credentials.

To build on the opportunity to talk about beef, MLA is extending the Virtual Classroom format in 2021 to introduce cooking segments into the sessions.  A culinary personality will team up with our Olympian and Paralympian Ambassadors to cook up a child-friendly ‘winning’ meal while talking about the health benefits of different ingredients and how that energy and nutrition fuels their body to help in achieving their goals.

Looking ahead at the wider Games program activities, encouragingly in October we had word from the International Olympic Committee, Tokyo Games Organising Committee and our Australian Olympic and Paralympic partners communicating their collective commitment to deliver a Tokyo Games – including an Australian Team in attendance, regardless of COVID.  Clearly this requires detailed scenario planning to ensure the health, safety and well-being of all involved.

MLA continues to plan a range of activities across retail and community channels as part of our partnership as we look to 2021, which offers an unrivalled opportunity to remind consumers, customers and the community about why Australian beef is the greatest.

The Accelerated Adoption Initiative was announced in 2019 to enable red meat livestock levy payers to access a wide range of MLA’s products and services at no cost until 30 June 2021.

The removal of financial barriers for producers to access MLA products and services has been a practical way for MLA to provide direct support to producers as they have faced and recovered from drought, floods and fires.

The nearly 200 producers who have attended the Bred Well Fed Well program workshops since the Initiative was launched had their fees waived.

Sheep Genetics has seen a noticeable increase in some existing breeders submitting data faster and including more information on their animals. This action has improved the overall quality of the data in the Sheep Genetics analysis, generating a positive impact on the industry.

Integrity Systems Company, a fully-owned subsidiary of MLA, which manages red meat integrity systems, has witnessed a significant spike in the adoption of key LPA products since the Accelerated Adoption Initiative was launched.

The Initiative has supported a smooth transition of industry to the new 0720 versions of the NVD for all species, which will be mandatory to use from 1 January 2021.